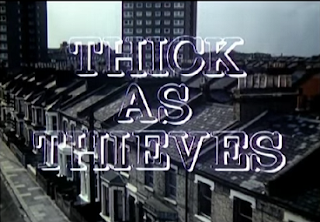 Today's blog is written by that absolute swine of a writer called Mark Cunliffe who is the proud host of the So It Goes... blog

Dick Clement and Ian La Frenais are rightly regarded as sitcom greats. The Likely Lads and its sequel Whatever Happened to the Likely Lads, Porridge and Auf Wiedersehen, Pet, their names are a byword for comic perfection. However, their 1974 sitcom Thick as Thieves is not a title you’re likely to hear spoken of fondly and alongside their better known, much loved titles. In fact, it’s a real rarity.

But why is that the case?

Well for one, it only ever ran for a single series of eight episodes in ‘74 and was never, to my knowledge, repeated. And for another, it was also an ITV sitcom, made by LWT, and it’s perhaps fair to say that the sitcom output from ‘the third channel’ has never really achieved the same status in our collective conscious as those from the BBC – with only Rising Damp perhaps proving to be the exception to this rule. Add to these the rarity factor that this is a sitcom featuring dramatic actors in the lead roles, John Thaw and a relatively young Bob Hoskins, rather than comic stars. 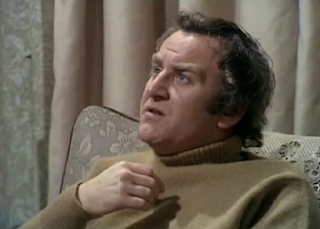 Now available on DVD via Network, the premise of Thick as Thieves sees our two leads star as small time crooks and best mates Dobbs (Hoskins) and Stan (Thaw). Dobbs has been inside for a stretch and, returning upon his release, he finds to his shock and surprise that his wife Annie played by Pat Ashton, is now living with Stan.

But instead of meeting this revelation of adultery with outrage and anger, an uneasy and comedic alliance develops between Dobbs, Stan and Annie, as they set out to live together under one roof as man, and man, and wife! A sort of working class London Jules At Jim if you will!

Coming between Clement and La Frenais' well received Whatever Happened To The Likely Lads and the equally successful project that was Porridge, it's little wonder then that Thick as Thieves has been so overlooked. However there is a clear through line between both those greats on display here; the friendly rivalry relationship depicted between Dobbs and Stan is very reminiscent of the chemistry between Bob and Terry of The Likely Lads, and the criminal world they inhabit would be further explored with Fletch and friends in Porridge. 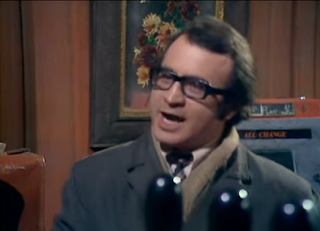 Thick as Thieves also shares a similar kind of opening credit vibe to Whatever Happened To The Likely Lads in that they both showed the conflict between old and news that was the landscape of the late 1960s/early 1970s; the demolition of slum areas (in the North East for WHTTLL and South London here for TaT) and the rise of the more impersonal tower blocks. Both programmes also feature a bittersweet theme tune sung by Mike Hugg from lyrics written by himself and La Frenais.

There are also strong links to Porridge too as Clement and La Frenais are on record as claiming it was the writing of the Porridge pilot, Prisoner and Escort, for Ronnie Barker's series Seven of One that spurred them on to actually writing Thick as Thieves.

Instead of just writing that pilot, they followed it through to find that they had actually come up with the idea of someone being released from (rather than going into) prison and that they had fifty pages of 'treatment' before realising they had two separate entities on their hands. The pair concentrated on the character of Fletch for Ronnie Barker, and what was to become Prisoner and Escort, but kept Thick as Thieves back to explore as another series. It's also worth pointing out that once Porridge ended, the sequel, Going Straight would mine similar material regarding coming out of prison that had previously been explored here. 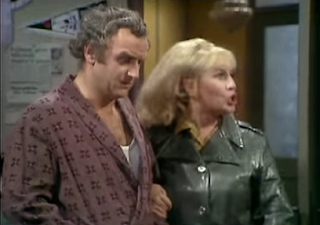 As with all Clement and La Frenais' work, Thick as Thieves has a great air of realism, specifically in its ear for earthy dialogue. Dobbs and Stan are an utterly hapless but believable pair, with Thaw’s Stan sharing many of Likely Lad Terry Collier's (and later Auf Weidersehen, Pet's Oz) charmed but largely uneducated and feckless life - he's forever searching for the right word in conversation, leading to something of a catchphrase "Is that the word?".

Dobbs meanwhile is more long suffering and, just like Bob Ferris, prone to the banana skins of life. Together they make a perfect pair of opposites and there's a great chemistry between them helped immeasurably by Hoskins and Thaw's rather pally playing. They're an enjoyable presence onscreen and it is easy to find yourself liking them, despite their nefarious activities. 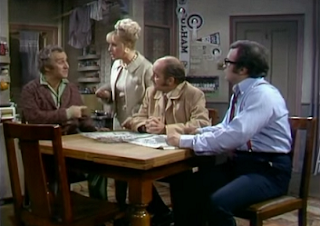 A character I found less likeable however is Annie, played by Pat Ashton, but that’s no disrespect to the actress who delivers great work as the woman they both love. It's just that, as a viewer, it is hard to get a handle on her and her attitude to both men, as they strive for her affections.

Occasionally characters from outside the domestic set up, ie supporting players, pass comment on their unusual relationship and claim that they consider her lucky, but she seems to spend all her time moaning about Dobbs and Stan, more like an exasperated mother or big sister than a lover or someone who has the best of both worlds. What's more bewildering and infuriating for the viewer is how quick she is to fly off the handle if there's a whiff or Stan or Dobbs seeking another woman, yet in one episode it is perfectly acceptable for her to leave both men for yet another suitor! 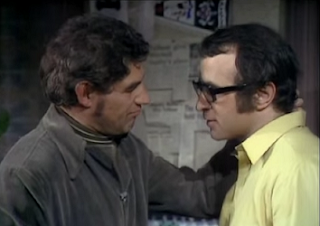 Speaking of supporting characters, there are plenty of familiar faces that pass through the doors of Dobbs, Stan and Annie's home, including On The Buses Michael Robbins as the local plainclothes copper keeping his beady eye on the newly released Dobbs, a young(ish) Trevor Peacock from The Vicar of Dibley as an escaped convict known to the pair and seeking sanctuary, and Johnny Briggs as another local chancer called Spiggy, before he went on to household name status as Coronation Street's cockney charmer Mike Baldwin.

Thick As Thieves may not be a comedy classic but it proves to be an enjoyable eight part series which is a cut above most ITV sitcoms of the era, series that seemed to trade solely on crudity and offensiveness to appeal to the lowest common denominator (the aforementioned On The Buses immediately springs to mind here) It does show its age though, and not just in terms of the visible tape distortion and scratches seen on some episodes. 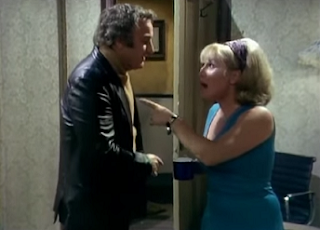 There are plenty of odd camera angles and close ups as well as actors walking in front of one another which, along with fluffed lines, suggests neither proper or sufficient blocking during rehearsal occurred before shooting commenced in front of the live studio audience. There’s also the kind of salty dialogue you simply couldn’t get away with no on the grounds of political correctness – the early ‘70s really were different times.

Equally the show does take a couple of episodes to find its feet, or maybe that's just me; as I say it's strange to see the likes of Hoskins and Thaw playing roles so clearly for laughs. But that is not an unwelcome situation, both actors show they have a real flair for comedy and Hoskins uses his inimitable, diminutive but bulky physical presence for laughs here with the same success he received using it for drama. 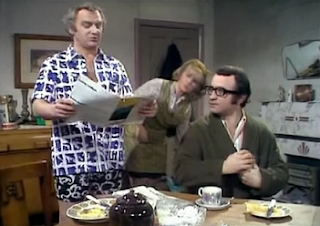 On reflection, I do think thought that the world of Thick as Thieves may have been better served in the comedy drama genre rather than the straight studio sitcom format. If they played it in the same vein as Budgie, Adam Faith’s series about an equally small time and luckless crook, I really think Thick as Thieves would have been more memorable, and perhaps less of the dated curio it now appears to be.

Thick as Thieves is available to buy on DVD from Network. It's a good DVD but there are no extras or special features, just the episodes themselves which, in my view, are worthy of your time if you like this kind of thing.

Be warned though, once watched you won’t be able to get the Mike Hugg theme tune out of your head!
Posted by Telly Viewer at 9/15/2016
Email ThisBlogThis!Share to TwitterShare to FacebookShare to Pinterest