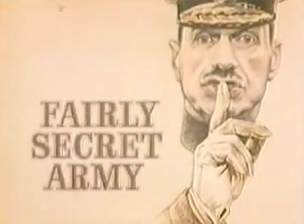 Sometimes secrets are necessary in order to protect the fragile feelings of some wretched soul who can't cope with the stresses of truth. And, frankly, yes, if you find out some god awful secret about us we'd rather you keep it under your hat or we'll tumble in to a lachrymose state pronto. Delicate flowers we are.

But sometimes, you know, secrets are there to act as a front for more Machiavellian pursuits such as overthrowing the namby pamby lefty framework of dear old Blighty, so keep schtum or the whole plan'll come tumbling down upon us.

That clipped speech yakking and incredibly British Harry Truscott (Geoffrey Palmer) ain't half fallen on hard times. Out of the army, out of money and certainly a few bob short in the old romance stakes, he's at his wits end. But don't worry, charging over the horizon is his saviour - suicide! 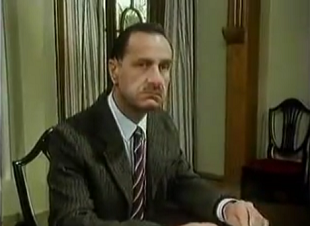 It don't exactly go to plan, though, after he's talked out of it first by the bobbed hair beauty Nancy (Diane Fletcher) and then his old army 'friend' Beamish (Jeremy Child). And it turns out Nancy and Beamish are siblings. And Harry has a bit of a thing for Nancy. And Beamish caused the breakup of Harry's first marriage.

It's all kicking off, but blimey we ain't even started yet!

Harry and Beamish manage to temporarily put their problems aside as they both share a common enemy who are dragging the Great in Great Britain through the mud and, no doubt, a hedge backwards. Yes, it's them bleeding lefties who are making Britain softer than cream cheese. 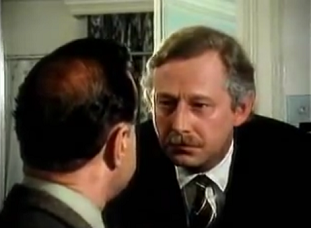 Now, Beamish has been left a considerable sum of money and just happens to have a rather large house, so... THEY FORM A RIGHT WING ARMY! It's secret though, obv, as these are treacherous times and you can't trust anyone not to give the game away. And it's all done under the front of a health food store. Pass the mung beans, please, for we're getting right peckish! 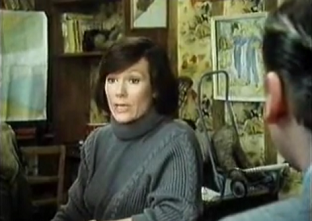 The recruiting process proves to be shambolic with people forever joining and then leaving or being booted out due to Harry's eccentric antics and demands. Eventually, though, a small band of soldiers is formed and they're able to march about a bit and carry out disastrous drills.

That's pretty much it for the first series, but by the second series the army finally have their first assignment. On the orders of the rather shady government figure Smith (John Nettleton), Truscott's army are instructed to infiltrate a dangerous Marxist cell headed by The Cobra (Michael J. Jackson).

Fairly Secret Army was a Channel 4 show which consisted of 13 episodes and was beamed out between 1984 - 1986 in the form of two televisual series'. 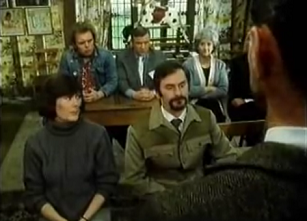 Now we ain't gonna pull the wool over your eyes by wildly announcing that Fairly Secret Army is a Reginald Perrin spinoff. However, it more or less is. You see, the character of Jimmy in Reginald Perrin is an ex-army man and has plans to form himself a right wing army. And he's played by Geoffrey Palmer.

But writer David Nobbs weren't gonna stand for none of that spin off nonsense. The public loved old Reggie Perrin and would have spent most of the series wondering when he was gonna turn up. Nobbsy felt this would be a bit distracting, so changed Jimmy to Harry Truscott. No doubt the BBC would have had a few copyright issues too. Saying that, some dialogue from Reginald Perrin does crossover such as Jimmy's 'forces of anarchy' rant.

Now, David Nobbs wrote the whole thing, but there was another comedy star involved on script duties (for the first series) in the form of John Cleese. You might be thinking what in Sam Hill is Cleese doing getting involved in this, but it's all down to who produced the series - Video Arts. They're a production company who mostly make training videos. And they're owned by the Cleester. 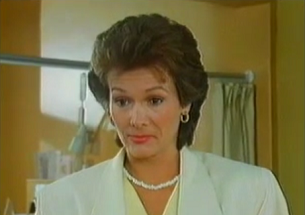 Cleese's role is uncredited and we've heard a rather scurrilous rumour that he thought the scripts were so good he didn't have to make any changes. You'll need to hit Cleese up on the dog and bone for confirmation on that though.

Roy Ward Baker - who once won a Golden Globe - directed Fairly Secret Army and was certainly no stranger to the small screen having directed episodes of Randall and Hopkirk, The Saint and The Avengers. And who was it leading the brass band so ingrained into the show's music? Why if it wasn't that little known composer Michael "I'M WORLD FAMOUS' Nyman, so it's a nice coup of supporting crew.

The series was filmed on 16mm to give it a filmic sheen, but the second series does include some VT. This comes in the form of a quick recap section at the start of each episode helmed by Harry. And he's been superimposed against a notice board. The horror! 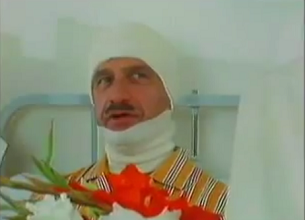 Fairly Secret Army failed to wow the critics and the public - despite getting a longer second series - and has never been released or repeated. However, some Nostradamus like genius predicted our blog and decided to record the whole thing for posterity; Oh what a treasure you is, mate! It's floating about on pirate DVDs, but is also up on YouTube for your viewing ease

We were at a loose end for something to watch, so we headed over to YouTube and typed in "Channel 4 1984" and up sprung Fairly Secret Army. It was obviously a sign from the retro telly gods, so we decided to expose our retina to these curious looking tellywaves.

What is it though? Sitcom? Comedy drama? It's difficult to say. There's no laughter track, but frankly that would have been a little jarring as Fairly Secret Army doesn't follow the 'feedline - gag' structure so beloved of sitcoms.

In fact, there's not many laughs in general. We barely tittered over the entire 13 episodes. That's not to say it's not amusing as there's a rich vein of whimsy running through the whole thing. The dialogue, too, is wonderfully playful with some strong mechanics behind it to highlight the farce. But your sides aren't going to hurt, so we'd say it's some kind of comedy drama custom built by David Nobbs in a petri dish. 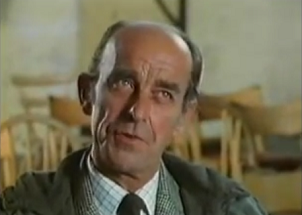 That settled, how's the drama? Uh... well.. the best thing we can say about the first series is that bumbles along amiably. It starts off great with Harry reminiscing about his life and hinting at being institutionalised, but after this it descends into a rather repetitive parade of people joining the army and then either walking out or being forced out by Harry's eccentricities.

The second series, though, does have a bit more purpose with a clearer goal on offer. But, you know, even this becomes repetitive over the course of 7 episodes. Harry's character, of course, is forensically explored throughout, but we were crying out for a bit more jeopardy. The final episode finally pulls some action out of the hat - although curiously it's all over by the midway point - and hints at a possible third series (which never came).

We were a little disturbed by the way the whole far right theme is handled. You see, it doesn't really get its comeuppance and, by the end, Harry seems to be heading for great things. Sure, he's portrayed as a bumbling leader with a rag tag army, but the morals behind is raison d'etre are never really shot down. What with UKIP running round with their pants down these days it felt like a rather sinister foreshadowing of what's bubbling away today. 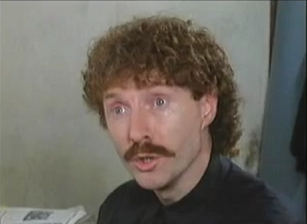 One other problem is the amount of characters in the whole damned affair. We loved Peg Leg Pogson (Paul Chapman), Beamish (Jeremy Child), Stubby Collins (Ray Winstone) and Throttle (Michael Robbins), but they're lost amongst the multitude of characters and barely get time to breathe. The only characters that are afforded some depth are Harry and Nancy.

It's a real tragedy that Ray Winstone wasn't involved in the second series as he's one of the strongest supporting characters. He brings some real bite to Stubby Collins and proved a fascinating handful for Harry to deal with. Sadly, his sidekick Rob Boat (Richard Ridings) is too much of a caricature and proves weak viewing on his own in the second series. 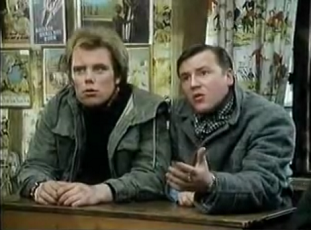 The acting, though, is the series' saving grace and Geoffrey Palmer puts in an assured tour de force (what else would you expect?!) and wrings every ounce out of Harry Truscott's psyche. It's a spellbinding watch and you genuinely do begin to empathise with Harry's plight throughout no matter how malodorous his intentions are.

We wouldn't watch Fairly Secret Alarm as there's not enough pay off in the chuckle count or the engagement stakes. We do our best to avoid hard slogs and we do fear this is what a repeat viewing would feel like.

However, it's a unique show which teams up some great stars of British entertainment, so it's definitely one to stick on your 'British Shows to Watch Before You're Brown Bread' list.
Posted by Telly Viewer at 7/11/2015
Email ThisBlogThis!Share to TwitterShare to FacebookShare to Pinterest