Reg Varney, now there was a salt of the earth fellow and perhaps best known for being the first ever human man person to use an ATM in the entire world. He also did some sitcom about buses as well. At least that's what we learned at school. 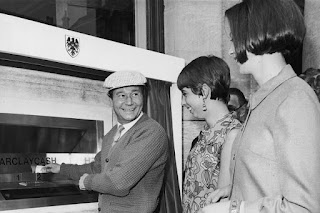 But, lo and behold, he only went and did a few more things with his spell on good old planet Earth! And one of them was a sitcom from them crazy old black and white days called Beggar My Neighbour.

Oooh! Black and white! You don't see much of that on Curious British Telly!

And that's why it's the perfect time to get all monochromatic-sixties-groovy-baby with Beggar My Neighbour.

Harry Butt (Reg Varney) is your everyday typical cockney sparrow type chap who just happens to be a plumber on a nice little earner due to the overtime he sticks his backside into. He sounds quite a catch, don't he? And it's these attractive qualities which have ensnared him the loving attention of Lana Butt (Pat Coombs). 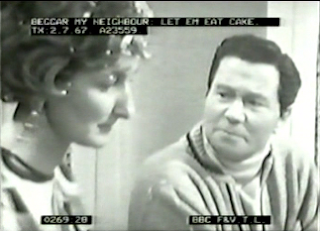 They live a delightful life with all the mod cons (on tick, mind you) that life has to offer in sunny Muswell Hill. However, in a cruel twist of essential sitcom planning, they're only living next door to Lana's sister, Rose Garvey (June Whitfield) and her husband Gerald (Peter Jones / Desmond Walter Ellis). 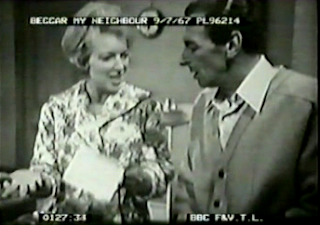 And the Garvey's life ain't half as sweet as The Butt's. Gerald, you see, despite being mildly more academic than Harry is stranded in a poorly paid office executive job and don't bring in nowhere near as much moolah. Gerald, though, with a rich streak of English snobbery coursing through his veins is insistent on keeping up appearances with their more affluent neighbours.

Beggar My Neighbour started off life in the sitcom birthing pool known as Comedy Playhouse way back in 1966. BBC bods were so enthralled with this tale of urban social strife and class warfare that they willingly flung open the doors of the schedules and demanded a damn series!

Writing the series were Ken Hoare and Mike Sharland, both of whom were busy contemporary writers of the day and crafted several sitcoms together such as Mr Digby, Darling and Turnbull's Finest Half Hour.

One of the most glaring production issues was that Peter Jones left the series after the first series. Quite why this happened is a mystery as a quick scan of his resumé doesn't reveal any roles bigger than this around the same time. However, Desmond Water Ellis was brought in to become his replacement and barely anyone batted an eyelid. 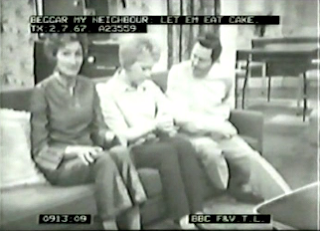 There were 23 episodes in total - across three series and the pilot - and all ran to that beloved British sitcom duration of 30 minutes. Episodes were transmitted in the 7.30pm slot on BBC1 and the series received just one solitary repeat in 1969 as part of the Comedy Choices series. There was also a short Christmas special in 1968 for Christmas Night with the Stars.

Sadly, as with many of its comrades, Beggar My Neighbour fell prey to the wild film junking of the day and only episode two from the first series and the entirety of the second series remains in the archives. At least two of the series two episodes are floating around as bootlegs.

And a bonus bit of info is that Jon Pertwee popped up in an episode.

Keeping up with the Joneses

We've been pretty damn guilty at Curious British Telly of ignoring anything prior to the 1970s. A lot of it is to do with the fear of not understanding these ancient tellywaves and, perhaps, being intimidate by our ability to cut deep down into the DNA of these shows.

However, when the chance came to get our sweaty hands on some episodes of Beggar My Neighbour came a calling we couldn't say no. Besides, we've always loved that infectiously cheerful Reg Varney chap, so we arranged a quick DVD trade and were soon marvelling at some black and white pixels. 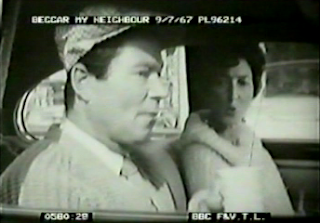 And, yeah, it's fair to say that the sixties sitcom vibe is absolutely ingrained in the show's soul like the spilt sherry on the Butts' cocktail cabinet.

There's the perennial sitcom character The Vicar coming round to pay a visit, scenes end with either a withering or jolly stab of brass music depending on the character's moods, class based hijinks run amok and the sets are cheap and basic. All it needs to be complete is for a pop band to burst in and play one of them toppermost of the poppermost songs.

And it was these clichés which troubled us as we began viewing the first episode, but you know what, you don't need to worry as it's a pretty damn good stab in the guts at the old sitcom genre.

Reg Varney's on sparkling Cockney form here and you can't help but love him whenever he strolls into shot and surely he must have been in David Jason's mind when planning the Del Boy character. Then there's dear old Pat Coombs (who we only previously knew from Ragdolly Anna) who puts in a lively performance, but hasn't had the strongest character developed for her, so is fairly forgettable in terms of plot beats. 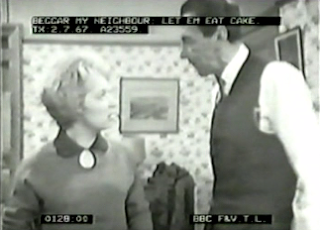 June Whitfield - here looking like a curvy 60s saucepot - manages to and presents a content loggerhead for Desmond Water Ellis (we suspect Peter Jones too, but we ain't seen his performance), but she's lacking a unique character - much like Pat Coombs - which counted against the writers yet again. Just because they're female it doesn't mean you turn them into background props, lads!

Desmond Water Ellis is a great character, but we found his acting hard work at times. His voice sounds as though it's struggling through tarmac at times and's nowhere near as zippy as the other characters.

Plots are pretty standard stuff for the time and mostly based around Gerald Garvey's ill thought out ideas and desperate attempts to climb up that peculiarly British social ladder. However, the scripts are above average for the era and we found ourselves chuckling several times throughout the two episodes we watched. The dialogue's sharp and the dynamic between the cast helps take this up a level. And there's not many ancient sitcoms we can say that about.

You know what? We enjoyed Beggar My Neighbour a helluva lot more than we thought we would.

Sure, it's not got the pathos of  Hancock, the characters are nowhere near as richly drawn as in Dad's Army and there's certainly not the hilarity of Steptoe and Son, but it's a decent family sitcom which leaves you satisfied and not wanting to boot the TV screen in frustration.

Although we won't be launching an archive TV heist in order to liberate the existing episodes we'd certainly part with a few pennies if the BBC ever deign to release them on DVD.

Seek it out, people!
Posted by Telly Viewer at 7/20/2015
Email ThisBlogThis!Share to TwitterShare to FacebookShare to Pinterest