The Moon Over Soho 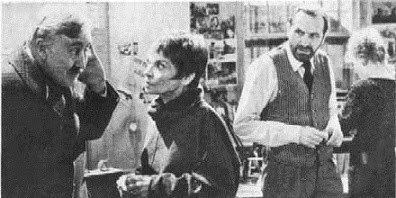 Soho is an intriguing little corner of London. It's perhaps best known for its sleaze, but alongside the neon signs there are plenty of other little industries plugging away. There's the bustling market of Berwick Street, the gay heartbeat of Old Compton Street and the seemingly endless types of cuisine available on every street.

The media, of course, have long had a presence in Soho. Post production companies litter the streets, pop stars hole up in expensive apartments and, according to the BBC, a struggling film magazine tried to make ends meet in 1985 in The Moon over Soho.

The action opens with a shot of Rupert Street as a packed market heaves with a busy crowd. In the background, the bright lights of the Raymond Revue Bar illuminate the scene. Red lit signs offer the promise of girls and, against this vibrant scene, Joseph Leroy Patterson (Larrington Walker) cuts his way through to the office of Cherubim Books.

Cherubim Books is owned by the enigmatic Max von Konigsberg (Leonard Rossiter) who affects a German accent whenever necessary. He feels, you see, that a foreign accent is the only way to get ahead.

Now, Cherubim Books is a curious little company. Its pride and joy is the film magazine 'Silver Screen', but it also owns the rights to 'Progressive Origami' and 'Farming for Fun', both of which have never seen a single issue published. Oh, and the office is based in a basement flat next door to a 'topless live show' on Old Compton Street.

It's certainly a seedy little location and the slipperiness of the adjoining live show appears to have seeped into Max's veins. You see, times are tough for Silver Screen. Sales are falling rapidly, the bank manager is desperate to make an appointment with Max and the magazine's editor has just upped and left for The Times.

Joseph, who handles subscriptions (a fairly light job), is the only member of staff left, but even he's having doubts about continuing given Max's fragile state. Max, however, remains resolute that the companies problems can be deflected by calling in favours and handing out freebies such as a trip to Japan.

Then, all of a sudden, Sally Spencer (Lesley Manville) turns up on the doorstep of Cherubim Books after the editors job being advertised in The Times. Max can't quite get his head round this as he hasn't placed an ad. However, Sally manages to impress him by discussing the work of his beloved Fritz Lang, so Max hires her immediately.

Are things suddenly starting to look up for old Max?

Well, no. Sally Spencer is less an angel in disguise and more a poisoned chalice. Old Max hasn't been entirely kind to filmmakers over the years and he's made a few enemies. It's no surprise really given the critical nature of being a critic, but well, we suppose creative types have delicate egos.

In particular is the ego of Geoffrey Hargreaves (Ken Campbell) whose whole career appears to have been rubbished by Max over the years. Geoffrey is desperate for revenge and has been tipped off by Max's ex-editor that something rather scandalous lies in the trunk behind Max's desk.

A fiendish plan is hatched by Geoffrey to get Sally on the inside and finally expose Max's dark secrets to the News of the World.

Meanwhile, Max is desperately trying to scrape enough money together to bankroll Silver Screen. He's even resorted to sending himself threatening letters to win the sympathy of his rich and intellectual mother, Frieda King (Mary Morris).

What exactly is in the trunk and, as well as battling a deranged Geoffrey Hargreaves, will Max manage to keep Silver Screen going?

The Moon over Soho was part of the BBCs 'Summer Season' of one off plays that aired in 1985 and written by Peter Ansorge who would later go on to help found Film on Four. The play was directed by Stuart Burge who had a long career adapting plays for film and television.

The music - a gentle combination of piano and horns - is provided by one of Curious British Telly's favourite composers, Ilona Sekacz.

Leonard Rossiter died in 1984, so it's difficult to tell if The Moon over Soho was meant to be broadcast as part of the 'Summer Season'. The play was recorded around Christmas 1983, so it seems a long time to hold onto it if that is indeed the case.

It was, in fact, the very final screen appearance for Leonard Rossiter, but despite this marking it out as a curio of British television it has never been repeated or released on DVD.

Rising Damp is, without a shadow of a doubt, one of our favourite sitcoms of all time, so we were rather intrigued when we heard about The Moon over Soho.

Considering how well respected he was, we found it bizarre that Rossiter's final TV appearance garnered little more than a few tiny mentions online. And there's certainly no footage besides a solitary screenshot presumably from a press piece.

We had to investigate this slice of retro TV, so got straight on the blower to the BFI Archive and booked in to watch the play.

The opening shot is a thing of true beauty. That's the real Soho there. The sleaze and deceptiveness of the strip clubs and peep shows hint beautifully at the deception which is awaiting Max.

Nowadays, you'll find that Soho is a very different place. Sure there's still some sleaze there, but Westminster Council and wealthy landowners appear to be driving this out. Soon it'll be just another corner of West London with little identity.

This opening shot, then, acts as a wonderful little time capsule, but how about the acting unfolding against this sleazy backdrop?

Well, Leonard Rossiter, bloody hell! He's probably never been better than he is here. There's not much comedy in the script for him to take on, but instead we see the more nuanced, dramatic side of him. He delivers furtive glances, world weary stares and panics uncontrollably as he's taken hostage by a crazy Geoffrey Hargreaves.

And, yes, Ken Campbell as Geoffrey Hargreaves is terrifyingly fantastic as well. He's completely loopy, but we don't truly realise this until he's lurking in Cherubim Books wearing a fake mask to insanely taunt Max.

The rest of the cast are fine. Really, there's no problem with them. They don't sparkle, but neither do they drag proceedings down. Although, we have to be honest, we're not sure what Joseph's character adds to the story. He could easily have been dispensed with.

That's perhaps the problem with The Moon over Soho. The writing is good, but not fantastic.

There are great scenes such as the contrast of Frieda explaining to Sally about her husband's terror of being imprisoned in a concentration camp, whilst Max is being terrorised in the basement of Cherubim Books.

Also, Max trying to convince his mother he's on the receiving end of violent, anti-semitic hate mail is entertaining. Especially when Max realises she won't be bailing him out as, first and foremost, she wants to get to the bottom of whoever's bullying her precious son.

These excellent pieces of script, however, are held back by a lot of questions.

Why exactly are The News of the World so desperate to smear Max? He hardly seems like a big fish who would be worthy of their attention.

And (spoiler here) Silver Screen was started by Max, right, to promote an up and coming film beauty, but that didn't work out. That's fine, we get that. And then she ends up working as a prostitute in a Soho brothel. Again, we get that and it's nicely tragic, but how the hell does she end up bankrolling Silver Screen until her death? She doesn't exactly have the back story of 'one with money'.

Then there's Sally's 'betrayal' of Geoffrey by switching sides to protect Max. It all seems rather sudden. We know he bought her flowers, but we felt the play could have benefited with a more natural bond developing to make this switch of allegiances more believable.

You know, we found that The Moon over Soho was just about good enough to be considered a forgotten gem. Rossiter's performance is quite outstanding and really lifts the piece. If you've ever enjoyed a performance by the great man then you'll love this. He still had more than enough to offer British TV on this showing.

The sleazy, untrustworthy underbelly of Soho runs nicely through the veins of the piece and the director has really captured this along with the rest of the cast's acting. Ken Campbell puts in the best performance we've ever seen from him and he perfectly captures an unhinged mind on the edge.

However, we did find the script a little lacking and the resolution is far too clean cut and sudden to really wow us. It could have been a much stronger piece in more talented hands, but as it is it hardly ranks as classic TV.

It's a fine sign off, though, for Leonard Rossiter's legacy, so we would love to see a release of it. 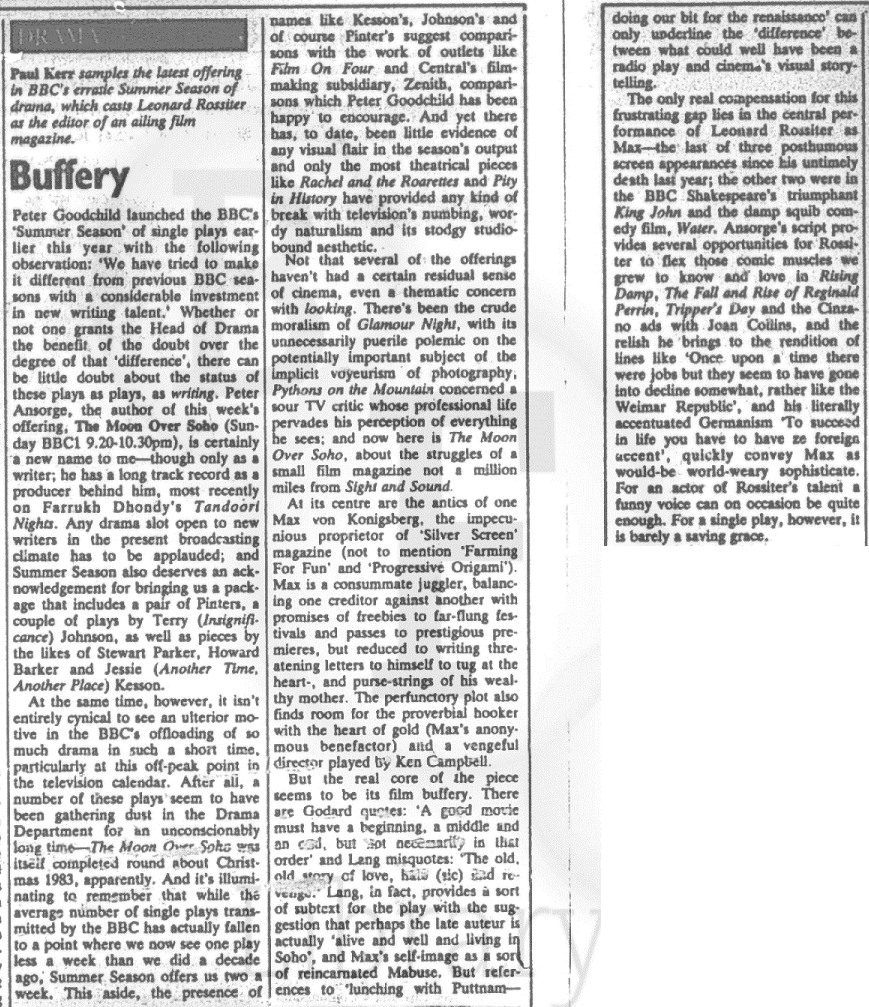