My Summer with Des 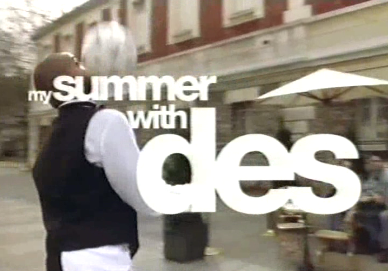 For men (and women) of a certain generation, Euro 96 is a pain that never ends. It was a tournament which celebrated our nation's favourite sport against a backdrop of jingoistic chants, nostalgia and, most damningly, the age old heartbreak of supporting England.

However, for a couple of weeks it genuinely seemed as if football was coming home as we were swept up on a tidal wave of outlandish skill and heroics from our beloved 11 boys in white. And this buoyancy of the nation's mood is best summed up in My Summer with Des.


Martin (Neil Morrissey) is in a bit of a quandary. Still struggling to get over his ex Anna (Tilly Blackwood), his latest masterstroke in life is to call his boss "melon arse" and walk out of his job. Still, not to worry, Euro 96 is about to kick off. What better way to soothe his nerves than with the witticisms of Des Lynam and some rampant xenophobia? 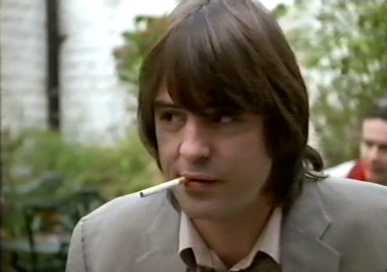 His true salvation, though, appears to lie with the mysterious Rosie (Rachel Weisz) who glides in and out of his life like McManaman on the wing. As England progress through the tournament, Martin's relationship with Rosie blooms exponentially and she gradually drags him out of the doldrums to show him the joys of being alive.

And, then, four days before the semi-final against Germany, Martin, having realised Rosie possesses supernatural powers, begs her to take him to the semi-final now, whilst life is perfect. However, what will events on the pitch mean for Martin's future and his relationship with Rosie?

Who's He Playing up Front?! He Should Be on the Bench!


My Summer with Des aired on BBC2 the evening before the first game of France 98; The script was written by professional grump, Arthur Smith aka the bard of Balham. 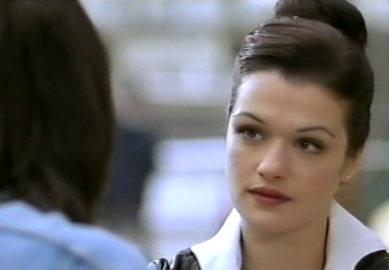 The origins of the play started with Arthur being asked to compose a short piece of prose for The Independent on Sunday. At this point, it didn't feature the philosophy of Des Lynam pulling everything together, but concentrated on the magical love story between an England fan and an angel.

By a stroke of luck, the day after the story was published, Arthur was commissioned to adapt it as a feature length drama for the BBC. This wasn't Arthur's first brush with a football based TV play. 1994 had seen a similarly titled production called An Evening with Gary Lineker coinciding with USA 94. Someone had obviously been a fan and it's sequel went into production.

Arthur was due to appear in a small role, but not being confident in the production's handling, he buggered off to Barbados to watch England struggle against the West Indies bowlers. Cameos were, however, fulfilled by David Seaman and, maintaining a link to An Evening with..., Peter Shilton. Des Lynam's bon mots came from broadcast footage of Euro 96, but several wisecracks were specially written for the production. 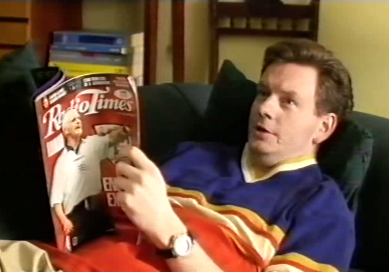 A VHS of My Summer with Des was released shortly before it aired, but it has never made the leap to DVD. 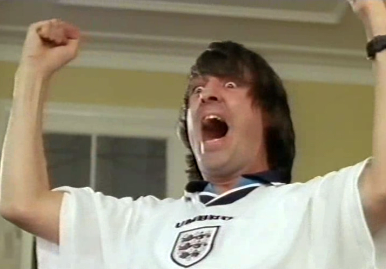 The VHS of My Summer with Des is rather difficult to get hold of and usually quite expensive. With no DVD release in sight, we headed to YouTube. To our delight, we found it straightaway! Frustratingly, UEFA had blocked twenty minutes worth of it due to some concept called 'copyright'. We were furious, but called up some of our connections and soon had a DVD ripped from the VHS copy.

With three lions on our shirt, we sat down and prepared to be taken back to that heady summer. And the first thing that strikes you is that the casting is ABSOLUTELY perfect. 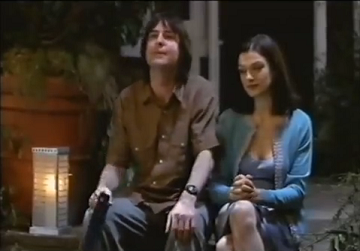 Neil Morrissey will always epitomise the mid-90s lad and we couldn't think of anyone else filling Martin's scruffy shoes. He's got that face which can at one minute be optimistically wide eyed and the next downtrodden and grouchy. Much like a toddler.

And, perfectly cast to lift Martin's mood, Rachel Weisz is drop dead gorgeous and encapsulates everything that's worth getting up for in the morning. One look into those eyes and you could deal with anything. She's the perfect guide to help Martin through his troubled summer.

Martin's flatmate, Cameron (John Gordon Sinclair), has a vague nemesis/friend feel, but he's stuck on the periphery of the story. He's not essential to it, but does provide some additional turmoil for Martin. Tilly Blackwood, again, isn't given much screentime and it's a fairly mediocre performance.

Des Lynam, of course, is nothing but a suave gent who can say a million words with just one twitch of his moustache. David Seaman and Peter Shilton are, of course, not actors and that's all you need to know. 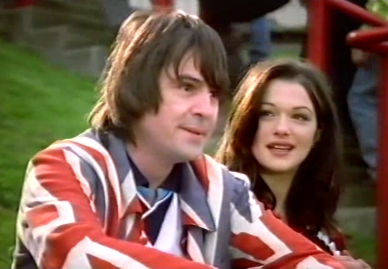 In My Summer with Des Arthur Smith has composed a curious story which deals with love and philosophy, but this isn't your stereotypical mid 90s British romcom featuring bumbling gents and American beauties. Okay, it may appear to be a breezy, nonchalant affair on the surface, but look beneath the surface and you'll find a story packed full of pathos.

Martin is, clearly, a man in disarray. Still heartbroken over the breakup of his last relationship, Martin is stuck in a rut and struggling to cope with the thought that this is life. Storming out of his job may have felt like redemption for his soul, but drunken unemployment isn't exactly helping him hoist his sail towards a spiritual reawakening.

And Euro 96 is merely acting as a distraction from his problems. Sure, he's having a lot of fun, but it's very much an analogy for the drunken night before. If Martin's not careful then he's going to wake up with a long and painful hangover in the morning. Thankfully, though, help is on the way!

Equipping Martin for this period of necessary transition are the pearls of wisdom from Des Lynam and Rosie's joie de vivre outlook on life. And, despite never discovering who Rosie is - she could be an angel, she could be the ex lover of Eric Cantona or she may be Des Lynam's daughter - it doesn't matter. She sets Martin on a path towards happiness and performs this act with a jubilant and irresistible zeal.

Coming from the pen of Arthur Smith, you're pretty much guaranteed a riproaringly funny script, but it's also one which is laced with a series of questions about discovering happiness and salvation. And, whilst there are broad sex gags sprinkled throughout, they never feel cheap and the more cerebral gags never feel too exclusive. 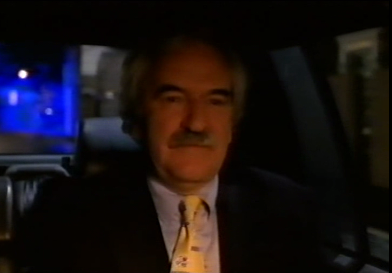 It's just a shame that we all know what's going to happen when Southgate steps up to take that penalty...

Sick as a Parrot? No Chance!


My Summer with Des is probably my most favourite one-off comedy drama. It's an uplifting piece which touches on some deep themes, but never depresses. And, even if you hate football with passion, don't worry, it's a show whose central themes are integral to anyone's life. Football is merely used as a framework for this amazing narrative to unfold.

Special thanks go out to Arthur Smith who forwarded us an excerpt from his autobiograpy on My Summer with Des. 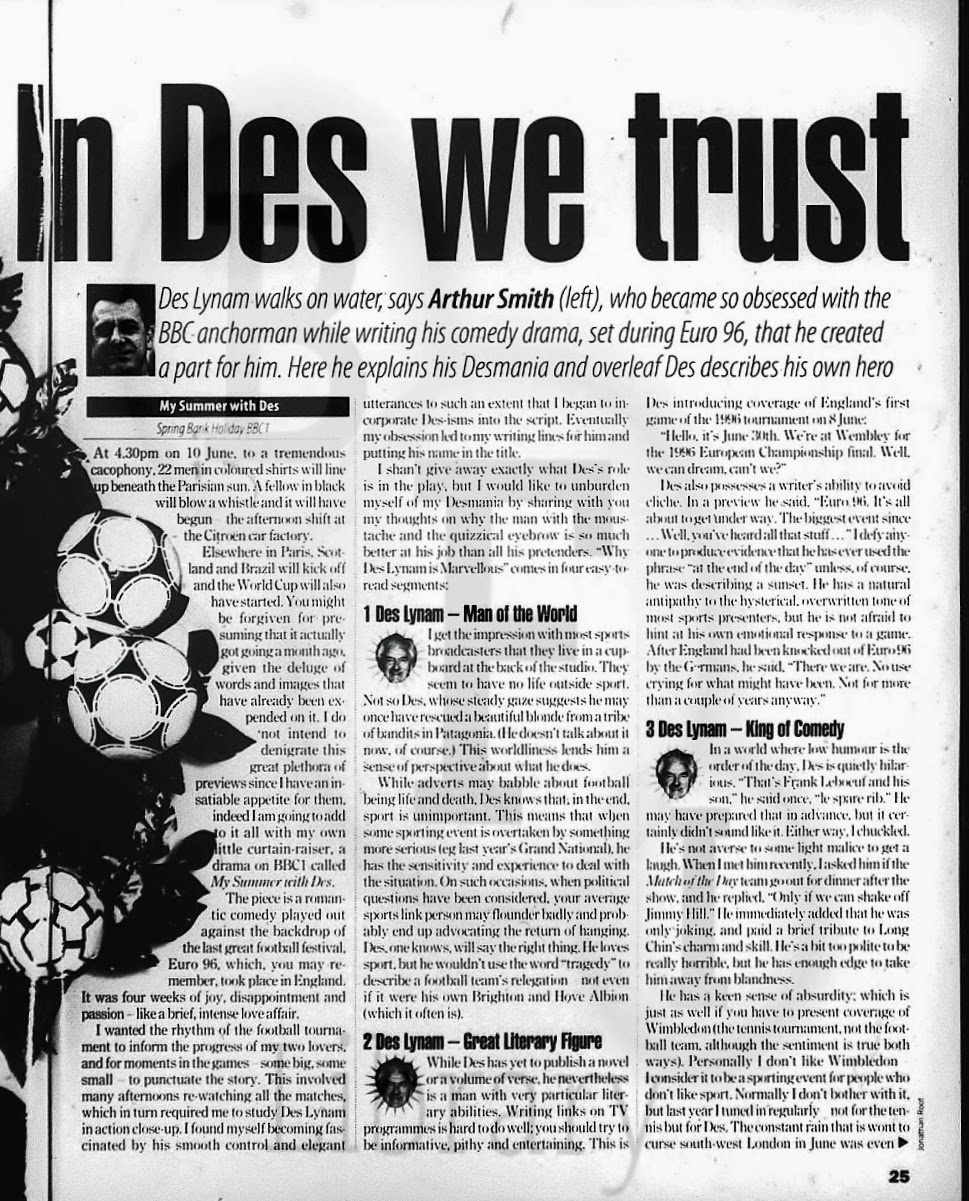