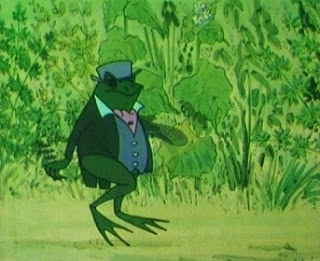 Due to having rather more time on my hands this weekend than I expected, I've decided to bring forwards the latest edition of The Forgotten World of British Children's TV. This particular installment features anthropomorphic cushions, tie-wearing crocodiles and Bill Oddie chewing bubblegum. And, as I'm sure you'll agree, they're all incredibly British, y'know, the good British, not that pandemonium fuelled Brexit take on Britishness that seems to be clogging up the headlines. So, let's forget the customs union (whatever that is) and slide back into simpler times... 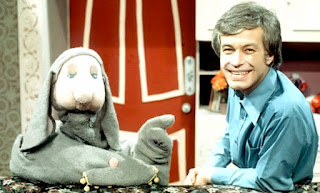 Down at Hickory House, where the doors are wonky but grinning and the exterior is flanked by giant fauna, a series of female inhabitants live amongst the curious puppet folk of the house. Throughout the course of the series, Amanda Barrie, Nicolette Chaffey, Louise Hall Taylor and Julie North all rub shoulders with Dusty Mop (keen on cleaning and asking questions) and the sleepy, cushion based Humphrey Cushion. Maintaining a presence throughout the run of Hickory House is Alan Rothwell who lives down the road and is the epitome of 70s fashion. Episodes of Hickory House find the inhabitants looking at particular themes such as waking up, caterpillars and birthdays through a mixture of songs, stories, games and animations.

Cast in the mould of countless other lunchtime children’s shows, Hickory House is a charming and eccentric take on the genre. Eschewing the bright surroundings of Rainbow, the aesthetics of Hickory House are incredibly 70s with the chintzy decor and Alan’s tight, brown trousers particularly standing out. With a busy mixture of puppets and different learning activities on offer, there’s plenty within Hickory House to abate even the most frantic attention span. The series was produced by Granada Television with 129 20-minute episodes airing on ITV over its five series run with repeats running until 1978. The puppets of Hickory House were created and operated by Barry Smith’s Theatre of Puppets. 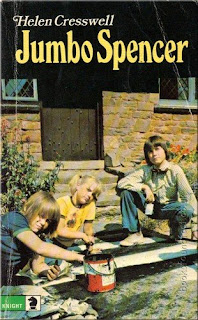 Jumbo Spencer (Mark Weavers) is on a mission to improve the village of Shoredale and to underline this intent he’s formed the Jumbo Spencer Reform Group. A group of individuals that includes Jumbo and his mates Maggots (Natalie Boyce), Freckles (John Weavers) and Mike (Huw Higginson), the Jumbo Spencer Reform Group have big plans. Not only does Jumbo want to help bring Shoredale a little more recognition from the outside world, but he wants to use the villages new found ‘fame’ to help drive funds towards a new village hall. Unfortunately for Jumbo, life isn’t always plain sailing with his publicity campaigns landing him in trouble and then there’s the small matter of Bill Stiggins (Christopher Watts) and his gang who want to ruin Jumbo’s grand plan.

Jumbo Spencer was written by Helen Cresswell, a fantastic writer who had previously penned Lizzie Dripping and would later go on to write some of the most creepy children’s TV ever produced in the form of Moondial and The Demon Headmaster. Adapted from Cresswell’s 1963 children’s novel of the same name, Jumbo Spencer was made up of five 20-minute episodes which were directed by Jeremy Swan (Jackanory, Rentaghost, Grandad) and first aired on Monday evenings in a 5.20pm slot on BBC1. The series was only ever repeated once with this broadcast coming in August 1977 as part of the summer holiday morning schedule for children on BBC1. 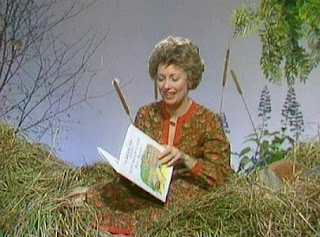 Introduced by a title sequence featuring a rather dandy frog hopping through the undergrowth to the strains of A Frog He Would A-Wooing Go, Gammon and Spinach brings the magic of storytelling to life with Valerie Pitts – and, for the third series, Roy Kinnear – reading picture books for small children. Set in amongst an idyllic countryside scene with a peaceful soundtrack of chattering birdsong, Gammon and Spinach features either one or two stories per episode and, if time permits at the end, a quick run through of the illustrations. Featured stories include Burglar Bill by Janet and Allan Ahlberg, Noisy Nora by Rosemary Wells and The Tiger Skin Rug.

Produced by Yorkshire Television, under the careful eyes of producers Joy Whitby and Anne Wood, Gammon and Spinach ran for seven series as part of the lunchtime ITV schedule, the later series also received a same-day repeat in the late afternoon Children’s ITV slot. The 10-minute episodes saw a number of directors come and go during the course of Gammon and Spinach’s lifespan and these included Yorkshire stalwart Alister Hallum (Behind the Bike Sheds, Dramarama, Rowan’s Report). Aside from the same-day repeats, there were no later repeats forthcoming for any of the episodes. 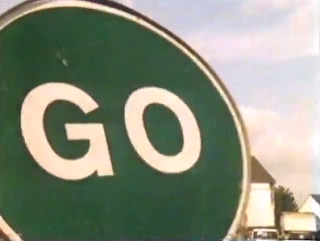 Narrated by Lola Young and Ben Thomas for the first and second series respectively, Stop-Go! travels around the country and shadows a variety of people using transport and machinery. A visit to a fairground leads to a thorough examination of how the octopus ride is dismantled, packed up and then transported to a new pitch. Other episodes of Stop-Go! find country vets being followed on their rounds as they call upon sickly cows and horses while there’s also time to examine all the work involved in maintaining and running a train.

Starting and closing its episodes with an amiable jazz theme tune, Stop-Go! more than matches the jaunty feel of Michael Omer’s composition. There’s nothing radical within Stop-Go! but pre-schoolers aren’t exactly expecting to learn the finer points of the internal combustion engine. Instead there’s a gentle, breezy look at lots of whirring, swirling and sometimes moo-ing subjects. Two series of Stop-Go! aired in the early 1980s as part of the See Saw lunchtime programming for children on BBC1. A total of 14 10-minute episodes were produced by the BBC with both Michael Cole and Christine Hewitt acting as producers. Episodes of Stop-Go! were repeated fairly regularly on BBC1 up until 1987. 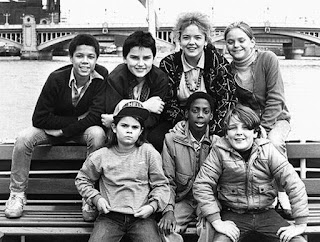 An archetypal Artful Dodger, Dodger is always looking to make a bit of quick cash and tries his hands at dealing in antiques (thanks to Bonzo’s metal detecting efforts) and taking in ‘charitable’ donations of jumble to sell on. Keen to exploit every opportunity he can find, Dodger also embarks on a brief career as an escapologist complete with his own sack. Matters aren’t always light-hearted in the foster home, however, with Elaine having to confront her abusive father in an effort to make peace for her mother’s sake. And, in the final Christmas episode, Elaine has to come to the rescue of her friend (Kerryann White) who is trapped in an abusive relationship with Barry (Phil Daniels).

Balancing the comedic exploits of Dodger with the grittier aspects of life in care, Dodger, Bonzo and the Rest is a forgotten classic that never fails to shine and engage. The majority of the performances from the young starlets are fantastic with Lee Ross and Jenny Jay coming in for particular praise. Originally starting life as an episode of Dramarama in 1984, Dodger, Bonzo and the Rest ran for two six-episode series (and a 1986 Christmas special). The series was produced by Thames Television with the episodes transmitted as part of Children’s ITV at 4.45pm. Producing the scripts for Dodger, Bonzo and the Rest was Geoffrey Case who had previously written for Minder, The Hard Word and Nobody’s Hero. 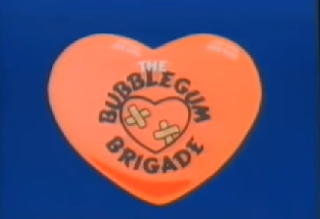 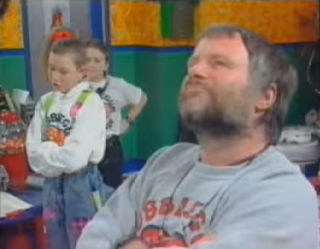 Hearts can be broken (and mended) in a myriad of different ways, so the Bubblegum Brigade find that life deals them an equally diverse run of narratives. An enigmatic pop group is tracked down to their mansion when they cancel their first ever gig, a school bully is shown that his methods of intimidation are severely at odds with a civilised society and there’s also the small matter of managing the romantic aspirations of a school girl who has eyes for a children’s TV presenter.

You don’t need to have studied for a degree in quantum comedy to understand that Bill Oddie is blessed with a comic timing and brilliance that few can match. And The Bubblegum Brigade finds him on fine form even if the narratives aren’t quite as striking as his earlier work. Written by Oddie and his wife Laura Beaumont, The Bubblegum Brigade was produced by HTV for ITV. Starting life off as an episode of anthology series Dramarama in 1988, the full series of The Bubblegum Brigade consisted of six 25-minute episodes which were broadcast in the late afternoon Children’s ITV slot. Episodes were directed by Pennant Roberts (Doctor Who, The Snow Spider, Dramarama) and Alistair Clark (No 73, Grange Hill, Children’s Ward). 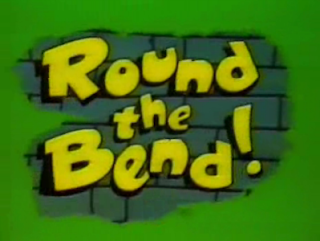 Deep down in the twisting, cavernous tunnels of the sewer system, there lies a dank, dark epicentre to all that is silly. And the man, or should I say aquatic reptile, in charge is Doc Croc, a shirt and tie wearing crocodile who acts as “The fun loving, friendly editor of Round the Bend, the world’s first electronic video comic”. Joining Doc Croc, and helping to produce Round the Bend, are three rats whose treatment at the vicious, lashing tail of Doc Croc severely stretches his definition of “fun loving” and “friendly”. Middle class rodent reporter Jemimah Wellington-Green is eternally failing in her quest to secure a celebrity exclusive, whilst the terminally cheerful ‘comedian’ Vaudeville Vince Vermin has more cringeworthy jokes than you can shake a stick at and, finally, in Luchetti Bruchetti, we have an Italian artist and the preferred whipping boy of Doc Croc. 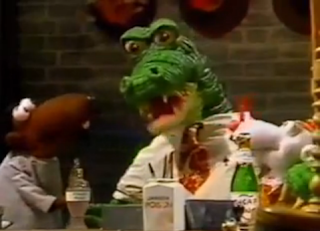 Together, this disparate bunch of characters encounter all sorts of chaos and hijinks down in the sewer; Doc Croc runs for Parliament on behalf of The Greedy Party, Vince’s tiresome penpal Eric Postlethwaite pays a visit, the rats form mega-band The Rattles and there’s a time for a killer teddy to run amok (twice). And, being an electronic video comic, there are, of course, animations. These animations are vicious parodies of existing cartoons, so there’s time for Wee Man and the Masters of the Looniverse, Thunderpants and Transformaloids. Films, too, come in for a quick spot of ribbing in the form of Arizona Jones and the Scroll of Destiny whilst there’s a special spot reserved for claymation shorts such as B-movie spoofs False Teeth From Beyond the Stars, Attack of the Atomic Banana and, finally, False Teeth from Beyond the Stars meet Atombanana.

Anarchic and subversive, Round the Bend is a hilarious children’s TV show which sticks two fingers up to convention and leaves you wondering just how they got away with it. It’s the type of children’s TV you’re unlikely to find in the modern age and the world is a sadder place for it. Three series of Round the Bend aired on Children’s ITV between 1989 – 1991 with each series consisting of six 20-minute episodes. Round the Bend rose from the ashes of the equally subversive comic Oink! which had been created by Tony Husband, Patrick Gallagher and Mark Rodgers. With the help of Hat Trick Productions, this trio brokered a deal with Yorkshire Television to bring the spirit of Oink! to television with puppets created by the Spitting Image crew.

And that's it for another installment, but let me know what you can remember about these shows in the comments below. And if you can think of any further additions to feature in future editions then let me know as, at the very least, I'd be cock-a-hoop to hear about them.
Posted by Telly Viewer at 11/18/2018
Email ThisBlogThis!Share to TwitterShare to FacebookShare to Pinterest