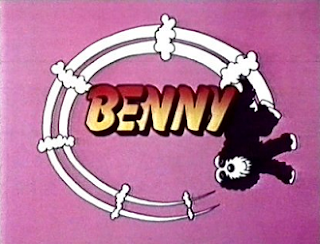 I’ve only been able to track down two episodes of Benny, but those two episodes contain a measure of violence and terror which are in stark contrast to its beautiful Cambridge surroundings.

Several months back, I took ownership of a hundred or so VHS tapes dating back to the early 80s with the intent of sifting through them. And, at the end of a particularly ancient BASF tape, I found a few clips of CITV continuity featuring Sue Robbie from 1984. Tantalisingly, one of these clips featured Robbie introducing a show that I had never heard of: Benny. There were about four seconds of the animated intro before the tape cut to a recording of First Post (also featuring Sue Robbie). Benny, however, intrigued me and I wanted to find out more about this mysterious show.

My first stop on the investigative trail took me to Google, but all I could find were some listings for a selection of Benny books which came out following the series. Thankfully, I’ve got enough printed materials and online resources to delve a little further, so I was able to pin down some basics on the show at very least.

The series was written and presented by Diane Wilmer and produced by Yorkshire Television in 1984 with 13 10-minute episodes being transmitted on ITV in the 12pm and 4pm slot on Thursdays. Aside from that, I was struggling to paint much of a picture of the show. In fact, I barely had a canvas, let alone a palette of colours and a pretentious, floppy beret. As ever, though, the BFI Viewing Rooms offered up the prospect of two episodes, so it was to London that I headed.

Given the scarcity of footage up to this point, I had assumed that the series was an animated affair due to the snippet of footage I had found. However, it’s only the opening titles which are animated. The titles feature an animated Benny bounding and leaping through a series of comic strip boxes as he runs alongside joggers, turns up in the back of a police car and even peers out of a pram pushed by a lady. It’s all backed by a delightfully dreamy slice of folky goodness provided by the guitar talents of Gordon Giltrap.

So, it seemed as though it was going to be a typically fun lunchtime children’s show packed full of jolly japes and minor jeopardy. Now, the BFI only have access to two episodes: ‘Benny and the Common’ and ‘Benny to the Rescue’ which just happen to be the first and last episodes respectively. And they don’t half offer an unusual tone for a children’s TV show.

The animation soon gives way to real life action as Diane Wilmer opens up the episodes on Midsummer Common, Cambridge. Joined by Benny – a shaggy, black mongrel – Wilmer provides a little bit of background on Benny’s recent activities and then proceeds to give a quick introduction to the episodes. Neither animation or live action are on offer though and, instead, the adventures are formed from a series of still photographs – taken by Brian Cleasby – with the occasional comic strip flourish such as speech bubbles and Batman style “BANG” graphics.

The opening episode explains how Benny came to live at the common, but it’s not a story that stems from the most pleasant of circumstances. You see, for all his life, Benny has been owned by a cruel and angry bargee. Moored up in Cambridge, Benny meets two local children – Bella (Olivia Ward) and Jack (Kirk Wilde). Benny is shocked by their kindness when they shower him with cheese, chocolate and hugs, but this enrages the donkey jacket clad bargee and he kicks Benny. As the bargee becomes more and more enraged with the children, Benny breaks free of his rope and leaps onto the bank with the children. The bargee has had enough and heads off without Benny, leaving Bella and Jack to take him in to their rather opulent home (it’s got chandeliers and HUGE paintings on the wall) opposite the common. 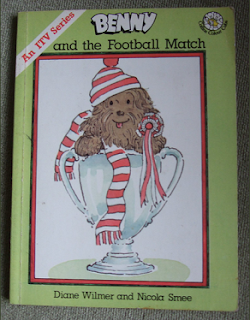 The final episode sees the return of the bargee and this time he’s decided he wants to take Benny back. Discovering where Benny lives, the bargee stalks Benny whilst menacingly clutching a length of rope to ensnare him with. However, the bargee ends up lassoing his rope around Benny’s friend Harry, a Bernese Mountain Dog. Due to Harry’s superior size, the bargee decides he’ll have Harry instead and drags him off to the barge. Benny attempts to rescue Harry by nipping at the man’s ankle, but this simply results in Benny getting kicked. Running back to Bella and Jack’s house to get help, Benny and the family manage to catch the bargee while he’s held up at a lock on the river. Bella and Jack’s Dad jumps on to the barge and grabs the bargee before giving him a dressing down. Eventually, the bargee relents and unties Harry before setting off in a surly mood.

Although there’s always a happy ending for Benny, the stories do become rather downbeat at times what with the anger and cruelty of the bargee. Naturally, the bargee only features in two episodes, so I doubt the rest of the series features Benny being kicked. And it’s far from the genuine glimpses into humanity’s darker side such as that seen in A Break in the Sun and Grange Hill’s harder hitting storylines. Regardless, it’s an intriguing combination of the nastier aspects of life and more amiable exploits such as children playing on delightful British commons.

Diane Wilmer, as the writer, clearly has the stories close to her heart and she imbues the episodes with a quintessentially British air. However, she doesn’t quite zing and pop with the same engaging electricity that other more established children’s TV presenters could summon. I’m thinking of people like Chloe Ashcroft, Carol Leader and Carol Chell, all presenters capable of elevating a series due to their inimitable charm. Nonetheless, it’s Wilmer’s baby and it’s understandable why she would want to take full control over her narratives and shape their delivery.

The method for delivering Wilmer’s stories is effective too and very similar to the techniques used in Teddy Edward. However, the comic strip additions such as thought bubbles and the captions jar a little bit. They’re used sparingly, so don’t feel an integral part of the storytelling and they’re not exactly fantastic artwork, so clash with the classy photography of Brian Cleasby.

Perhaps my favourite aspect of the series is the fantastic music provided by Gordon Giltrap. Anyone who has ever spent time walking round Cambridge in the sunshine knows that it's a tranquil, laid back city and Giltraps gentle, acoustic strummings soundtrack this landscape perfectly. However, during the more dramatic moments, Giltrap isn't afraid to get a little heavier in a manner which recalls The Who at their acoustic best. And, yes, if the full soundtrack to Benny ever gets released, I'll be at the front of the queue.

Having only seen two episodes, it’s difficult for me to give a true opinion on the series. It’s certainly interesting due to its forgotten status, but it’s the content which intrigues me even more. A small clipping from the TV Times promises that it’s “adventure all the way” following the first episode; further episodes find Benny encountering a stray dog, heading out on the beat with the police, admiring a rainbow and visiting an allotment, so they don’t sound that terrifying, do they?

So, if you’ve got any other episodes of Benny, please get in touch and maybe we can get a better representation of the series online.
Posted by Telly Viewer at 3/12/2018
Email ThisBlogThis!Share to TwitterShare to FacebookShare to Pinterest