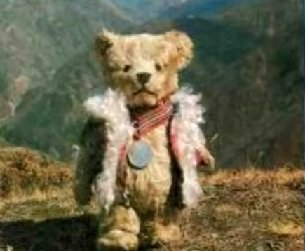 Technology may advance at a rapid pace and fads may come and go, but teddy bears remain a resolute pillar of childhood; their furry, almost stately charms are hard to deny, so it’s understandable why so many children cling onto their beloved teddies in bed and well into adulthood.

And it’s not only in reality that teddy bears are cherished, fiction is equally as obsessed with these woolly-haired and adjustable limbed caniforms. Children’s fiction, in particular, takes great delight in transporting teddy bears into a narrative and children’s television has followed suit accordingly.

One of the lesser spotted teddy bears stalking through the vast forests of British children’s TV is Teddy Edward, a medal wearing and globetrotting teddy whose adventures are captured in Teddy Edward.

Narrated by veteran newsreader Richard Baker, Teddy Edward concentrates on the activities of Teddy Edward and his animal pals Snowy Toes the panda, Bushy the bushbaby and Jasmine the rabbit. A number of Teddy Edward lookalike teddy bears also pop up, but remain nameless.

Together, these characters set off on their travels to explore various parts of the world and their accompanying settings and phenomena such as rain, snow, fishing, red Indians and mountains.
These affable narratives are told through a series of still photographs which are zoomed in and out of to show the characters in their surroundings. No movement is present and, apart from Richard Baker’s narration, the rest of the soundtracks consists of sound effects e.g. birdsong and running water. 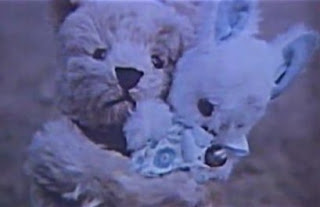 I know that description doesn’t really suggest much of a visual picture, so let’s take a look at the ‘Visit’ episode to establish what a Teddy Edward episode consists of. It starts with Snowy Toes sailing down from his home in the mountains to see Teddy Edward; before Snowy Toes knows it, Teddy Edward has dug his fishing rod out and they’re fishing. It’s a sedate, peaceful scene, but this calm is soon interrupted when Teddy Edward gets a bite on his line.

There’s such a struggle to land the catch that it must surely be a whale. Teddy Edward and Snowy Toes use all their might to wrestle and thrash with the line, but additional help is required – cue the arrival of several Teddy Edward lookalikes. Eventually, the catch is landed, but it’s not a whale. Instead, the denouement of the episode is a world away from Moby Dick as Teddy Edward has actually caught a bell. However, far from leaving Teddy Edward with the bitter taste of failure in his mouth, he’s very pleased as it’s a very fine bell indeed.

Teddy Edward started as a series of books written by Patrick Matthews in the early 1960s and were inspired by a teddy bear that Matthews’ daughter Sarah owned. The idea to photograph this teddy, stemmed from a photo that Matthews had taken of Cecil Beaton’s cat in a flower bed – yes, really. Matthews and his wife, Mollie, then wondered whether there was something in photographing their daughter’s teddy bear and telling stories around it.

The resulting Teddy Edward books sold around 250,000 copies and led to the BBC considering a TV adaption in 1965, but the idea failed to gain momentum. Following Matthew’s retirement from the world of publishing, he approached the BBC to discuss the possibility of adapting Teddy Edward’s adventures for TV. Perhaps regretting their decision in 1965, the BBC offered Matthews thirteen five-minute episodes in the Watch with Mother slot. 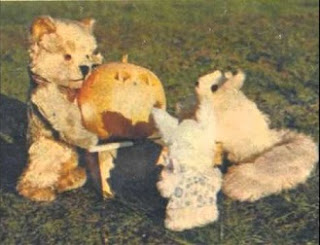 The series was not an in-house production by the BBC and, instead, came from Q3 London who also produced Fingerbobs, Crystal Tipps and Alistair and Joe. Richard Baker was brought in following his previous children’s TV voice work on Mary, Mungo and Midge in 1969.

Although operating on a fairly basic premise with no requirement for a film crew – Matthews took all the photos himself – Teddy Edward was certainly not made on a shoestring due to Teddy Edward’s reputation as a “much travelled bear” with production trips to Spain, France and Greece. Only one series of Teddy Edward was produced, but it was repeated up until 1978 and also aired in New Zealand and Norway. Following the end of the series, a number of books and records were produced to continue the adventures of Teddy Edward such as 'Teddy Edward Goes to Mount Everest'.

And you may be wondering where Teddy Edward, himself, is now located. Well, following Matthews’ death in 1996, Teddy Edward was sold at auction to a Japanese collector of teddy bears, Yoshihiro Sekiguchi, for £34,500 and ensured that Teddy Edward embarked on at least one more grand journey.

Despite not airing in over 35 years, Teddy Edward still holds a special place in the memories of many children. And, the fact that it was transmitted in amongst such classics as Bagpuss and The Clangers, inevitably means there must be something special tucked away in Teddy Edward. Being born in the early 1980s, though, meant that I completely missed the Teddy Edward bus and, with available footage being limited to a few seconds at best, I was a little worried that it was a slice of children’s TV which would remain out of my curious grasp.

Thankfully, the BFI Archive were able to rustle up two episodes – ‘Visit’ and ‘The Farm’ – of Teddy Edward for me to get a handle on the series and determine exactly why it’s remembered so fondly by the children of the 1970s.

First and foremost, the initial premise of Teddy Edward and its lack of movement may sound cheap and limited, but Patrick Matthews has managed to secure such an array of locations that the whole world appears to be Teddy Edward’s oyster. And these locations are so picturesque and pastoral that they’re perfectly deployed to create peaceful, timeless environments which define the innocence of children’s TV; it’s an achievement which is further bolstered by Matthew’s amazing photography. 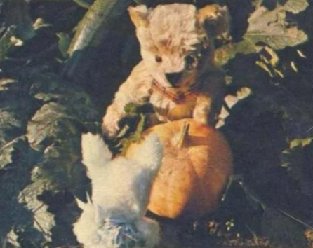 Despite the opening theme being a jaunty, woodwind led affair, the actual soundtrack reflects the appealing photography by teasing out the gentle hum of nature. It’s a collage of sounds so tranquil and relaxing that it plainly offers a less toxic alternative to drugs for insomnia. In spite of this, it would be a foolish move to sleep through Teddy Edward as the gentle charms of the characters and stories tap into that irresistible British brand of delightfulness. And central to this is Teddy Edward himself.

Teddy Edward isn’t a Holden Caulfield style character bursting with ticking idiosyncrasies and flaws; instead, he’s the epitome of a warm, welcoming bear who exudes a simplistic allure at every turn, so it’s no surprise that he surrounds himself with equally agreeable friends such as Snowy Toes. And the plots these characters find themselves in are… well… they’re not exactly overloaded with shape shifting narrative frameworks.

Teddy Edward hunting down an egg for his breakfast is far from eventful, but these are stories for pre-schoolers, viewers for whom damning indictments of religious faith – or concepts just as hideously grown up – can wait a few years. Instead, the adventures of Teddy Edward are concise romps through an idyllic world which, regardless of being far removed from reality, are quintessentially British. They draw from that great tradition of children’s stories which impart crucial life lessons through the exploits of the protagonists.

The icing on the cake is the charismatic voice of Richard Baker whose warming tones grant Teddy Edward a calming presence. It’s a skill that Baker had honed in the newsroom and prevents any hint of panic ever setting in, so, in the end, you always know that Teddy Edward will be okay.

Teddy Edward absolutely deserves a larger mention in the history of British children’s TV, but due to a relatively short run of repeats – compared to other shows – the series has never quite reached the upper echelons of its genre in terms of unadulterated fandom.

It’s a real shame as here’s a series which ticks all the boxes required to qualify as classic children’s TV in such a unique manner. With its marvellous photography, charming characters and fantastic sense of Britishness, Teddy Edward has a lot to offer any newcomers to the party. Teddy bears may, in conclusion, make unusual bedfellows – especially when their real life counterparts would rather savage us – but the eternal appeal of teddy bears means you’ll never want to give up Teddy Edward.
Posted by Telly Viewer at 9/05/2017
Email ThisBlogThis!Share to TwitterShare to FacebookShare to Pinterest