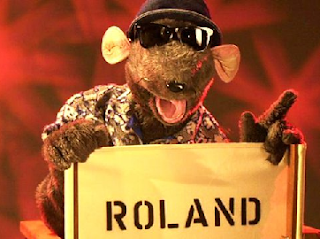 The Early Years and Life as a Blitz Kid

Determined to become a puppeteer from an early age, Claridge began taking this art form seriously at the age of 12 when he began attending lessons at the Midlands Art Centre, Birmingham to learn about acting, mime and puppetry. Within a few years, Claridge had made significant process and, it's fair to say, found his groove as not just a puppeteer, but also a designer and actor. All of this progress had been made under the watchful eye of John M Blundall and his Cannon Hill Theatre company.

At some point during the late 1970s, Claridge moved to London and immersed himself into the club scene and was soon a regular at The Blitz club - the undeniable breeding ground of the New Romantic movement - which was located in Covent Garden.
Following the demise of The Blitz, Claridge sought to keep its creative spirit alive, but push on in new directions. An early enterprise was The Ancients, a club night held at the Hell club at 30 Henrietta Street, Soho in 1980. An unusual club night in the extreme, The Ancients looked to mix classical composers Bach and Vivaldi with contemporary bands Magazine and Bauhaus. It also gave Claridge an excuse to dig out his ruff again as he told Over 21 Magazine:

"It´s going to be slides and film and smoke guns and candles and ochre lighting.  Hopefully people will come along dressed in the appropriate clothes and we´ll include them in it, projecting them on the walls or in the film we´re making" 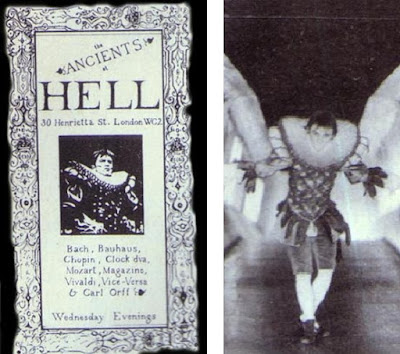 Claridge's burgeoning love of the Far East later manifestated itself in the form of The Great Wall club which he hoped would provide something in sharp opposition to the New Romantic and Glam scenes that had become, he felt, the one thing they once vehemently rebelled against: ordinary. Talking at the time, Claridge explained:

"Tired of popular music by bands by such as Visage, I fell in love with new music from the East that's exciting and fresh - not discovered and swiftly destroyed. Bands to include: Do, Mastoshi and Sandii. I´ve coupled that music with Oriental imagery ranging from China's Cultural Revolutionary Period to Japanese Kabuki, Bunraku even Thai fisherman's wear and Cantonese Opera"

Decorated with Chinese symbols and portraits of Chairman Mao, The Great Wall was an arresting spectacle and provided a fascinating foothold into an unexplored subculture. Naturally, it attracted prime faces of the London club scene and helped to further cement Claridge's reputation for having a unique and creative vision swilling about in his brainbox.

Claridge's interest in music from Japan soon morphed from a club night into a fully fledged mobile entertainment experience in the form of The Mobile Suit. Featuring New Wave from almost every corner of the Far East (and, as a curveball, Poland), The Mobile Suit would travel around the country putting on club nights to spread the word about these curious new sounds.

Ultimately, Claridge's aim was to start releasing this music onto vinyl and this eventually surfaced in the form of Tokyo Mobile Music 1, a compilation put together by The Mobile Suit Corporation and featuring artists such as Akiko Yano, Salon Music and Lizard. The record also featured ambient sounds served up by the auditory delights on offer from the streets of Tokyo that Claridge recorded in June 1981.

Barking mad and highly experimental, the tracks are exciting slices of avant-garde melodic strangeness and provide a welcome palate cleanser for your ears (do ears have palates?) when sampled alongside the slabs of vinyl which were making up the UK Top 40 at the time.

Claridge, however, didn't want to restrict himself simply to the world of clubs and music. He was, after all, a masterful puppeteer.

The television writer Rick Vanes and producer Lesley Joseph were planning a new children's TV series Get Up and Go! which would feature Mooncat, a cat from the moon (literal, but simple, like all the best children's TV) but they needed a puppeteer to bring Mooncat to life. In London to audition puppeteers, the pair had struggled to find anyone with the necessary skills for the job.

Last on their list was David Claridge who was, at the time, appearing on stage in a Micky Dolenz production operating a dog puppet through the black light theatre technique. Convening in Claridge's flat, Vanes and Rogers were highly impressed with Claridge, particularly his ability to chat to them and operate his dog puppet at the same time. The puppet eventually started humping Vanes leg and this pretty much sealed the deal. 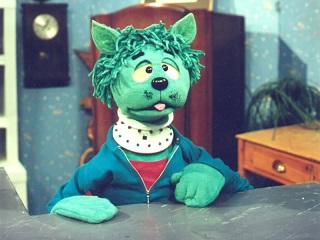 Claridge worked on 56 episodes of Get Up and Go! between 1981 and 1983 as he starred as Mooncat alongside Beryl Reid and Stephen Boxer. Vanes remembers Claridge as being a huge talent who was keen to push the boundaries of puppeteering in order to incorporate Mooncat into the action. Stephen Boxer shared a house with Claridge in Leeds and remembers Claridge being an obsessive collector of Japanese robots and Transformer toys. And Boxer also remembers Claridge running the idea past him of a Rat that lived in the sewers beneath Kings Cross...

This rat, as you well know, was Roland Rat. Children's editor for TV-am Anne Wood wanted something to entertain children during the Easter holidays, so The Shedvision Show was born and found Roland living in a shed on top of the TV-am studios. It was a highly successful introduction for Roland Rat and he was soon a TV-am regular introducing cartoons whilst demonstrating his quick wit and self assured attitude.

We all know how Roland Rat single handedly 'saved' TV-am - viewing figures rocketed up from 100k to 1.8 million during his time on the show - but despite this tremendous impact, it was around this time that David Claridge began to retreat from the public eye. In fact, all I could find from these early days of Roland Rat was an interview in the TV Times which revealed very little. 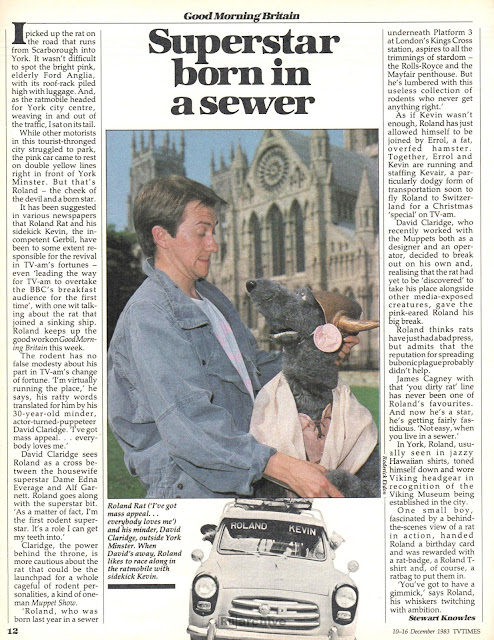 Claridge did, however, find time to appear in the Rat on the Road series which ran throughout the 1983 summer holidays and found Roland Rat travelling around the country as he visited various cities. Playing various characters such as a traffic warden and a university don, Claridge - despite being heavily disguised - is clearly identifiable by these characters voices as they're not a million miles away from Roland Rat and his pals.

Just as Roland Rat was beginning to reach stratospheric levels of fame and popularity, though, The Sun and The Daily star published stories which revealed a little known association from Claridge's recent past. The tabloids had discovered that Claridge had established a rubber/latex fetish night called Skin Two at gay club Stallions in Falconberg Court, Soho.

Despite Claridge having handed the club over to Leslie Herbert at this point, the papers had a field day digging up earlier quotes from Claridge - when hosting the club -  such as:

"I would like people to accept rubber clothing more. I’d like to see it on the High Street. Some dress up in appreciation of the fabric. Some like bondage and whipping. A lot of whipping goes on"

Given the era and the typical scaremongering of the tabloids, it was the last thing that Claridge and TV-am needed. Claridge was quoted as simply saying "It's all very embarrassing" and a TV-am spokesman, upon hearing the news, reportedly said "I am slowly sliding off my chair under my desk…". Thankfully, TV-am stood by Claridge and this support saw him produce endless more hours and even rap records whilst with ITV.

In 1985, Roland Rat jumped ship to the BBC where his success continued through several more series with his final appearance coming in Tales of the Rodent Sherlock Holmes in 1990.

The later years of Claridge's career are even murkier in terms of details, but it appears that, at some point, he married as a Leslie Claridge is listed as a previous director at Roland Rat Enterprises Television Productions Limited. Now, what's intriguing is that Leslie Herbert (who took over Skin Two) later worked on Roland Rat: The Series and, I'm told by Laurence Harvey (a co-star with Claridge on Parallel 9) that Claridge's wife was also a puppeteer. But, who knows, maybe there were two puppeteers out there called Leslie, so this is purely speculation. 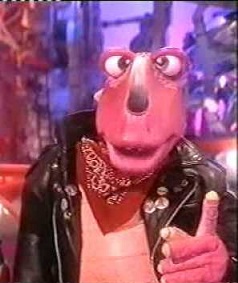 Talking of Parallel 9, this provided children's TV with another dose of Claridge magic as he operated Brian the Dinosaur - all pink and clad in a leather jacket - who, curiously, sounded much like a Northern Roland Rat. Laurence Harvey recalls that Claridge was a likeable fellow if a little grumpy and cantankerous, but what genius isn't? Harvey also remembers Claridge as being very protective of the art of puppetry and wanting his creations to be seen as more than mere, inanimate puppets which relied on an operator.

Parallel 9 ran for a few series between 1992 - 94 before coming to an end. Following this, Claridge later operated puppets on Channel 5's Happy Monsters (which also reunited him with Rick Vanes) and also produced Paramount Comedy's CGI series Mozart's Dog.

Roland Rat has continued to keep Claridge busy and, since his final BBC series, he has helmed a Channel 5 series L.A. Rat and many numerous cameos in shows including Ashes to Ashes, Big Brother and, my personal favourite, on The One Show where he took Adrian Chiles down in hilarious fashion and reminded the country of the magic that Roland could effortlessly pluck from his back pocket.

Who is David Claridge?

You know, I still don't really know who David Claridge is. Sure, he's a true visionary and incredibly talented, but he's managed to keep his puppet creations at the forefront of people's attention rather than shine the light on himself. Perhaps he feels that revealing too much of the magic behind them somehow confirms the fact that they're not fully conscious beings. This hints at a true dedication to his art and can only be applauded for the lengths he has gone to achieve this, although, I suspect this is as simple as not granting interviews.

Nonetheless, if he ever decides to release an autobiography I'll be first in the queue to buy it.
Posted by Telly Viewer at 7/01/2017
Email ThisBlogThis!Share to TwitterShare to FacebookShare to Pinterest