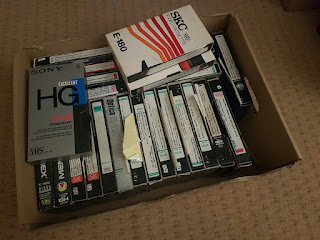 Another month, another mountain of tapes for me to sift through with all the fervour of a gold prospector in the Old West. I'm never going to make my fortune with old cases full of magnetic tape, but there's always the chance I'll uncover an episode of Conjugal Rites or maybe even Standing Room Only if I'm really lucky. One thing that I can almost guarantee to uncover is turn of the century WWF, but this falls far, far outside of this blog's remit. Anyway, I received three loads of VHS tapes in April, totalling around 200 tapes.

It's a huge amount (plus I was still sorting through some of March's finds), but, as ever, I found myself banging my head against a brick wall of static and ghosting which rendered a few finds as unsalvageable. However, every now and then, I'd find a little nugget of forgotten joy or a nostalgic reminder of how the world was in the days of the British Empire (well, the late 1980s to early 90s) and here's some of the picks of what I found:


Now, this is the very definition of an oddity! It's a travel series helmed by Russell Grant and only ever aired as part of the BBC Wales lineup. I've searched the internet high and low for information on it, but found absolutely nothing regarding its existence. Curiously, a postcard features heavily in the opening titles and credits, so perhaps this was an early version of Russell Grant's Postcards which he filmed for Channel 5 in the late 1990s. After a quick chat with Russell Grant on Twitter, he revealed that he made three series for BBC Wales in the 1980s.


The huge haul of tapes I picked up in March contained many, many 90s games featuring Chelsea, so it's safe to assume they were Chelsea fans (and Welsh judging by all the regional bits). However, there's also the possibility that they were football hooligans as they seemed rather interested in taping this news item about the Chelsea Headhunters trial. Thanks to the constant reappropriation of 1980s football hooliganism in contemporary culture, we're constantly reminded of this threat. However, it's all very repackaged and almost aspirational, but here we see it in its full horror. And there's also a nice mention for the long defunct Full Members Cup.


I'm always delighted to find a bit of children's TV footage (see later on) and when it's a bit of in-vision continuity it's particularly exciting. This small snippet precedes an episode of the 'new' series The Real Ghostbusters and features Debbie Shore wearing a jumper which truly sums up the 1980s.


This find starts off with the last few minutes of the One O'Clock News hosted by Philip Hayton and transmitted from a magnificently retro studio complete with red desk and red phone. There's a snippet of a feature on corruption in French football and then an item on the need for cycling helmets to become compulsory - a news story which I remember provoked much debate in the playground as to whether we would get arrested for riding sans helmet. Following this there's a look at the evening schedule and the opening minutes of quiz show Turnabout which I had completely forgotten about.

Every now and then, I find a tape which contains pure gold and, housed on an SKC tape, I found almost an entire afternoon's Children's BBC programming. It was part of a collection I picked up locally and was the one tape that wasn't riddled with static and noise. In fact, so downtrodden by the dire quality of the tapes, I almost chucked this one out thinking it was pointless checking it. However, it appeared to pre-date all the other tapes by three years, so I suspect it wasn't recorded by Mr Static.

The case was marked up as containing a film, but following the end of this film the tape had continued to record until it was full up. Sadly, this meant 15 minutes of a Blue Peter episode were missed, but apart from this it was fully complete and included all the Broom Cupboard continuity.  Most interesting was a drama called Bluebirds which featured a young Martine McCutcheon and Barbara Windsor, years before they were reunited on EastEnders. Also of note was an episode of quiz show Clockwise hosted by Charlotte Hindle.


Another oddity I uncovered was this 5 minute look at the joys of Christmas featuring the satirist John Wells. Again, there's absolutely no mention of this anywhere and it's not a surprise as it was tucked away very late on in the Christmas Day schedule when most people had dozed off in a turkey induced coma. Nonetheless, it's a nice artifact of the satirist's work and deserves a place online due to its scarcity in the nation's collective consciousness. 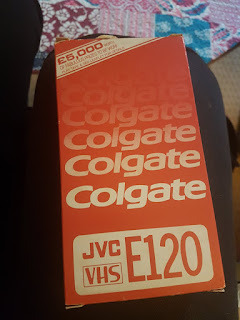 Finally, here's the oddest tape I've come across so far. It's a Colgate VHS tape, yes the toothpaste chaps. It also says JVC on it, so I suspect they made it and Colgate released it as part of some promotion. Judging by the contents - it contains Live Aid - the tape was manufactured in 1985 or maybe a little earlier. The picture quality is surprisingly high, so it's certainly suited to recording and not for unwinding the magnetic tape and flossing your teeth with - minty fresh it isn't.

And, as always, if you have old tapes from the 1980s - early 90s then I'd be interested in taking a look, so please get in touch!

Posted by Telly Viewer at 5/01/2017
Email ThisBlogThis!Share to TwitterShare to FacebookShare to Pinterest