Me, You and Him 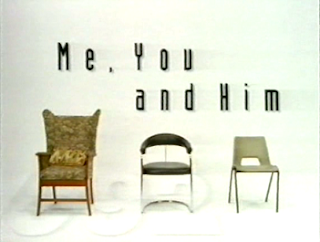 Although not an exceptionally popular child, I could still lay claim to a decent amount of friends. However, over the years, I've lost touch with so many of them that I barely need one hand to count those I still speak to. It's not a surprise, though, as everyone starts drifting in different directions as they get older and, anyway, I'm not sure I ever really liked Stephen Watlington, James Pashley or Mark Ewings (an undeniable scroat who nicked some of my Monster in my Pockets).

The friends you do stay in touch with, though, offer not only a wonderful excuse for nostalgic meanderings and recollections, but also a firm friendship which promises to deliver plenty more adventure for decades to come. At least that's what you'd like to think, but there's always the chance you'll get lumbered with the type of associates you thought (and hoped) would swiftly disappear with the last vestiges of acne and teenage angst. A case in point is the situation comedy stylings of Me, You and Him. 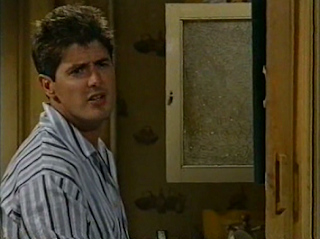 This trio of characters haven't, though, just been thrown together randomly. Friends since childhood, they've been in and out of each others lives ever since. Harry has been working abroad for the last three years - in which time Mark secretly dated Claire for a few months - but now he's back and has moved into John's flat until he patches things up with Claire. In the flat above live probation officer Helen (Harriet Thorpe) along with Todd (Ron Donachie) - the pair met whilst Todd was doing a two year suspended sentence for aggravated burglary. 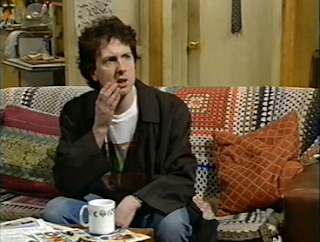 Together, John, Harry and Mark navigate their way through life (and the glowing embers of their friendships) in the early 90s (in fictional London area Southbridge) as John seeks to earn extra cash with private French tuition (he's still learning himself), Harry attempts to reignite his romance with Claire by taking her to see Dire Straits, but ends up locked in the flat and covered in paint whilst Mark ends up the best man for a highly irritating childhood friend he can barely remember.

Me, You and Him was a six part series which aired in 1992 on ITV and was written by Nick Hancock, Steve Punt and Hugh Dennis. Episodes aired on 8.30pm on Thursday evenings and no repeats of the series ever aired. 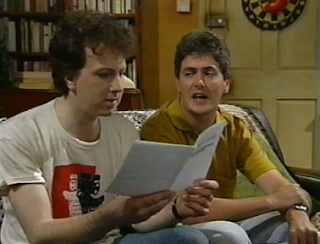 Wanting to know a little more about the show, I caught up with Nick Hancock to see what he remembered about the series all these years on:

"Steve, Hugh and I had been great friends since the off and it was made easier by the fact that they were two of the nicest men you could ever meet, so we always worked well together. We hadn't long left university, so flat sharing was something that was on all our minds and, first and foremost, we wanted to be in it!

Whilst we were all making waves in comedy at the time, we certainly had to work hard to get Me, You and Him commissioned. Steve did the lion's share of the writing with Hugh a close second, I was more coffee monitor than anything! It was very different to performing in the Footlights as sitcom is such a frustratingly stop/start process that you need to keep the adrenaline under control, the complete opposite of live work.

Luckily, it was relatively stress free as we had a wonderful team around us. Also, ignorance (which we had in abundance) is bliss, but I still learned that sitcom is very hard to do. There wasn't really any chat about a second series, like bestiality once is probably enough"

I recently unearthed an episode of the Punt and Dennis sketch show and, whilst admiring it, a loyal Twitter follower (and fellow comedyphile) asked if I remembered the sitcom that Punt and Dennis had done with Nick Hancock. And, stone me, I hadn't even heard of it, let alone had the capacity to store its existence in my memory. Naturally, I couldn't go too long without watching even a trailer for it, so got to work searching for it and soon had the full series in my grasp. 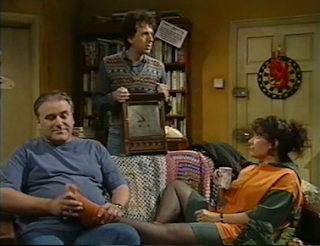 Flat share sitcoms are nothing new, so Me, You and Him transports the viewer to familiar territory, but whilst contemporary, male led sitcoms such as Men Behaving Badly and Game On were decidedly laddish, Me, You and Him is a very different beast. Although it's clearly moored in reality, it's calibrated slightly off-kilter which allows the Me, You and Him to conduct the occasionally surreal flourish such as Danny Baker (complete with 90s soap powder) stalking John and Mark round a supermarket. 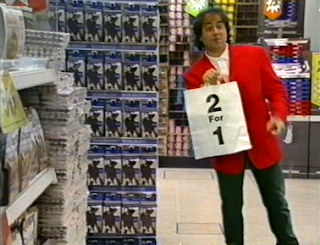 The episodes are well crafted and make for an easy watch due to the overall bonhomie pulsing through the series' veins. Sure, they're not meticulous pieces of stone cold comedy genius and they don't delve deep into the inner workings of friendship, but they're boisterous narratives with plenty of twists and laughs along the way - 'Crime and Punishment' perhaps being the best demonstration of this. And, despite the early-ish time slot of 8.30pm, the series avoids falling into bland family friendly territory and manages to slip in a few risque comments as it goes. 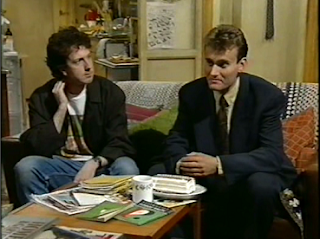 Surprisingly, despite the presence of arch satirists Punt and Dennis, there's no near the knuckle satire, but, instead, there are LOADS of early 90s references sprinkled throughout.

In fact, there's enough that I'm seriously considering starting up a Me, You and Him drinking game where you have to down a shot for every 90s reference. BBC soap disaster Eldorado gets several withering mentions, the Colgate Actibrush "Still Working!" advert keeps John busy for half an episode and then there's the aforementioned Danny Baker cameo. Oh, and there's a disturbing Jim'll Fix It reference where John claims to know Jimmy Saville and can 'fix it' for a pupil of his to sleep with Moira Stuart...

What really caught my attention, though, were the characters and the actors behind them and the uncanny similarities to their own lives.

Nick Hancock - previously a PE teacher and forever a suffering Stoke fan - gives a wry edge to John and seems to really delight in his conniving, lazy antics. Punt, meanwhile, appears to have tumbled out of a 6th form common room with his smarts being undermined by his reliance on his parents, but provides plenty of comic relief. Dennis, who spent six years in marketing at Unilever, is less likeable due to his character's workaholic dedication - and this is why his storyline with Claire fails to fully gel and engage - but still generates enough pomposity to be relentlessly pricked.

And, isn't it great seeing these three eager comedy pups chomping at the bit and ready to take on the world years before Room 101, Punt and Dennis, They Think It's All Over and Outnumbered really put them on the comedy map?

A Friend in Need?

Writing in the Daily Express at the time, critic Compton Miller dismissed Me, You and Him as "a misguided, claustrophobic offcut from The Mary Whitehouse Experience", but he also described Harry as "flash" and "aggressive", so I've got no idea what he was watching at the time.

Personally, I found something inherently enjoyable about the series. It's not the most fantastic sitcom I've ever seen (or even featured on this blog), but the chemistry between the creative team delivers a fun sitcom made by three long term friends who, obviously, knew a good friendship when they saw one. And wouldn't nick each other's Monster in my Pockets.
Posted by Telly Viewer at 3/18/2017
Email ThisBlogThis!Share to TwitterShare to FacebookShare to Pinterest