On the Trail of Fat Tulip’s Garden 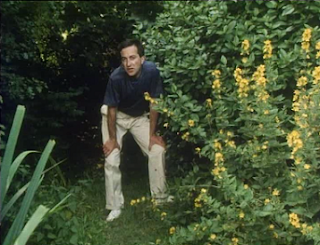 You may have noticed, on these pages, that I've got a certain fondness obsession with revisiting the TV shows which coloured my most early years. Now, it's all very well and good to research and write about these shows, but what would happen if I literally revisited one?

Well, today, I did! And the show in question was Tales from Fat Tulip's Garden!

The Beginnings of a Documentary

Back in the early days of Curious British Telly, I wrote an article about the curiously forgotten gem that was Tales from Fat Tulip's Garden which starred Tony Robinson telling a multitude of manic tales. The show was set in the beautiful Tudor house known as Little Monkhams and the memory of this house had remained embedded deep within my memory for decades. 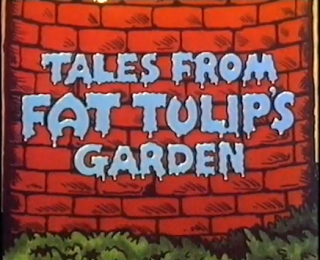 Fast forward a couple of years and I found an email nestling in my inbox from Faye Miller regarding my article.

She was in the process of putting together a short documentary about imaginary narrative experiences and wanted to use Fat Tulip as the main focus point. Interestingly, Faye is based in Australia where, unbeknownst to me, Fat Tulip had resonated strongly with our antipodean cousins and racked up quite a following. Anyway, it only took me about a millisecond to respond and confirm a hearty YES! 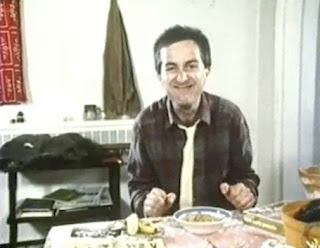 As with many productions, patience is a virtue when it comes to getting the wheels in motion, so there was a long period of silence on the documentary. I began to get a little anxious that maybe the production had fallen to the wayside, but at the start of this year progress suddenly picked up. A filming date was scheduled for the start of April and luckily my diary was free.

To help capture the spirit and essence of Fat Tulip, the filming location would be at Knighton Wood, Buckhurst Hill where many of the exterior shots were filmed.

Oh and there would be one final jewel in the crown: Tony Robinson - the beating heart of Fat Tulip - was going to attend and take part in an interview!

Obviously, I wasn't the only contributor to the production as it would have been fairly limited in scope and not reflective of the affection the show still holds in people's hearts.

Perhaps most closely related to Fat Tulip were Rob and Kate Allen whose grandparents had owned and lived in Little Monkhams when the series was originally filmed. Rob also brought along an amazing scrapbook packed full of pictures of Little Monkhams in its heyday. This helped to demonstrate the amazing family atmosphere and sense of history imbued within its thick stone walls and wooden beams. 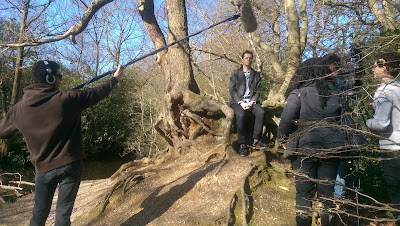 Also attending was Richard Chambers, a fellow fan of Fat Tulip and somewhat of an intrepid explorer when it comes to Fat Tulip. Back in 2010, Richard revisited Little Monkhams, but found it in a terrible state of disrepair - his fantastic blog article Sad Tales From Fat Tulip's Garden details his sad findings.

Once we had convened with the marvelously friendly and talented production crew, it was time to get started with the filming. Various locations had been selected around a pond in Knighton Wood which had also featured in Fat Tulip, so it helped to re-create the sights and sounds that the original Fat Tulip production team had experienced. 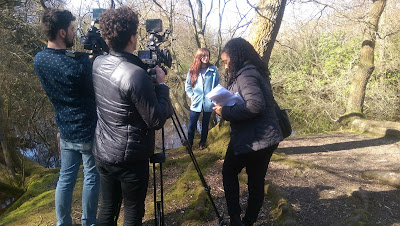 And Knighton Wood really is an idyllic slice of woodland. The sun was filtering perfectly through the branched sky above as giant trees stood proudly and ducks floated placidly upon the water. What's interesting about these peaceful, serene surroundings is that it makes for a huge juxtaposition with the vibrant, hurtling energy of the tales in Fat Tulip.

Once settled in our surroundings it was time to get started. Rob, Richard and Kate all recorded short interviews where they reminisced about the show and discussed what the show meant to them and how it had shaped their imagination. Being far too self conscious for camera, I recorded a short audio interview later on.

Anyway, next came Tony Robinson and, I'm pleased to announce, that he is a complete gent. He turned up with an infectious smile and this had soon spread across all our faces as he treated us to a few voices from Fat Tulip. He discussed the show with great insight and touched upon the genesis of the show, why he wanted the show to stoke the imaginations of children and what it meant for him.

It was clear that Fat Tulip was never 'just another job' for Tony and his passion for the show came straight from the heart. Special mention, of course, has to go to Tony's professionalism. Watching a skilled professional up close is always a treat and Tony spoke with an ease that belied his vast, vast experience in television. And rather than leaping in a waiting car as soon as he'd done his interview, he was more than happy to stick around and answer any questions. 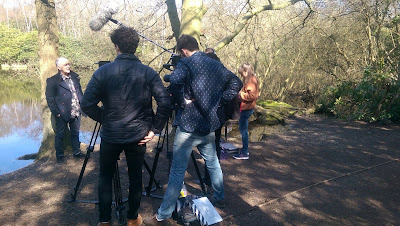 The documentary should be uploaded to the web at some point, so I'll keep you posted!

Obviously, I couldn't go all this way and not visit the remains of Little Monkhams. After all, it had made such a strong impact on me at the time. Here was a building which was not just home to a whole host of intriguing characters, but, more importantly, it also represented the possibilities of my imagination and how something could be created from nothing.

I trekked through Knighton Wood and, with a little help from a local, I was soon at Little Monkhams. Sadly, six years on from Richard's blog, it's in an even more tragic state. I managed to venture close to one side of the house, but sadly, without a machete, there was no way I could navigate my way round the rest of the house. To say it's overgrown is an understatement, the garden is now a jungle of thorns. 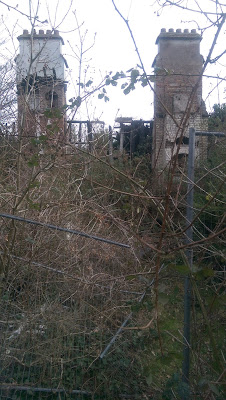 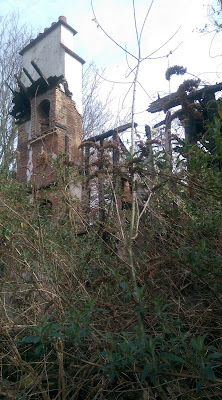 After seeing Robert's family photos of Little Monkhams, it was heartbreaking to see how dilapidated the house had become. Sure, there was still a certain character in it's charred remains and even a beauty in the way that nature - an integral part of Fat Tulip - was now reclaiming the building, but the vision before me made me feel a little melancholy. I guess that it's difficult for your brain to correlate nostalgic memories with the stark reality of time. 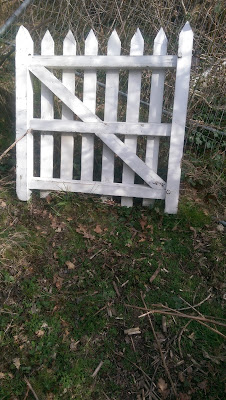 I took a small memento of the house; part of a door hinge from an old gate now ripped from its original moorings and slung up against a twisted security gate. It won't mean much to most people, but for me it represents a small chunk of my childhood imagination made real. And it's not often you get to capture that.
Posted by Telly Viewer at 4/02/2016
Email ThisBlogThis!Share to TwitterShare to FacebookShare to Pinterest