Larger than life, libertarian, ravisher of women, yes, these are just some the ways you can describe Russell Brand.

And it's these dominant traits which create the quintessential Marmite debate. Some of us are more than happy to lavish his yeasty goodness on a piece of toast and devour it whole, but others retch at the mere mention of his name.

We absolutely love him, though, and no matter how misguided he can be at times we'll offer up a fistful of knuckles for anyone who bemoans his lustrous locks and big mouth.

He wasn't, of course, always the media presence that he is today. No, everyone needs to start somewhere and one of old Russ' earliest forays into TV was with Re:Brand.

Russell Brand wants to challenge our rigid moral structures and take a closer look at the various microcosms bubbling away under societies surface that we're so willing to blindly reject. 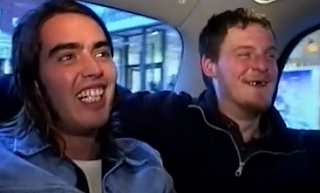 And it's in Re:Brand that Russell's going to immerse himself in these worlds and their inhabitants lives to glean some perception on their validity against the contemporary social politics that determine 'normal' life.

Re:Brand aired in 2002 on the now defunct Play UK channel which was one of the first digital channels in the UK (although it originated as UK Play). Episodes were filmed during Summer 2002 and must have aired pretty sharpish as the channel closed on 30th September 2002. 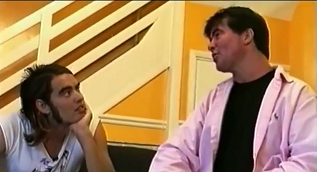 7 episodes were produced and, looking at the credits, there were relatively few people involved. The low budget nature of the show means that the credits don't even include surnames, so it's difficult to tell exactly who was involved. We do know, however, that Brand's longtime collaborator, Matt Morgan, was the series' researcher.

The series was produced by Vera Productions and Geoff Atkinson (of Vera) acted as executive producer.

Although there were rumours, several years ago when Brand's juggernaut really rolled into town, that a DVD release of the series was on the cards, this has never materialised. Don't worry though, kids, as all 7 episodes are up on YouTube, so hop over their sharpish to catch them.

And what's that curious snippet of post-rock playing over the end credits? Why it's "Summer (Priority Version) by those cuddly noiseniks Mogwai.

As we mentioned in our intro we can't get enough of Brand's infectiously outrageous personality. We first stumbled across him on Big Brother's Big Mouth and were floored by his loud, barmy antics and, most importantly, the rich streak of Britishness pumping through his veins.

We heard about Re:Brand a few years later when the tabloids were trying to demonise poor Russ and kept coming back to the fact that "HE WANKED OFF A MAN IN A TOILET, THE DEVIANT LOWLIFE!".

And, to be honest, we just laughed and thought "Yeah! That sounds like something he'd do, the little scamp!". 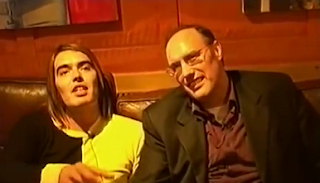 It wasn't until recently, though, infected by Branditis following his Audioboom podcast series, that we started to wonder about his early days.

We'd heard all the stories about drug abuse and getting fired from MTV on 12/09/2001 for dressing up as Osama Bin Laden, but Re:Brand found Brand in the middle of this maelstrom and we just had to take a look.

First off, 2002 Brand differs slightly to the post mid 00s Brand. The verbal dexterity and born-to-perform spirit are plain to see, but they're not as refined here. And the rock 'n' roll Jesus appearance that now defines him is less evident - he looks like your typical XFM presenter here, but as we'll learn, he's operating on a completely different level to his peers. 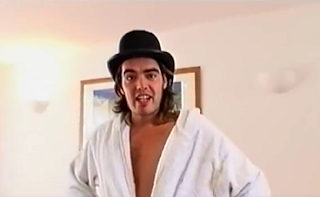 Re:Brand certainly don't pull no punches and Russell Brand adopts an exciting gonzo approach to investigating his subject matter. It kind of reminded us of a rock 'n' roll take on Louis Theroux's Weird Weekends, but come at from an angle that makes Re:Brand completely unique.

There's so much emotion and conviction at play here that Brand's compassion for the people he meets can't be underestimated. He certainly hasn't turned up just to get a paycheque and a bit of fame, but no doubt that helped him with the laydeez.

No, Brand cares and he don't just go the extra mile, he goes to extreme lengths to connect and understand the taboos he's investigating. Just take a look at the 'Homeless' episode where Brand takes in homeless James. He bathes him tenderly like a child before sharing the water with James in an attempt to humanise and recognise him.

There's not many presenters who would go to those lengths. 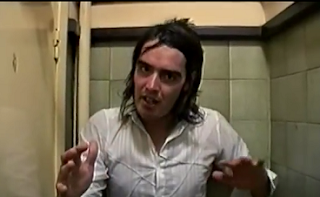 Brand's emotive approach doesn't always work though. The 'Naziboy' episode which centres on Mark Collett - youth leader for the BNP - suffers due to Brand becoming enraged with Collett's political sensibilities. Collett immediately nixes any more contact with Brand and many questions are left unanswered. It's difficult to disagree with Brand's view here, but a more calm approach would have yielded better results. 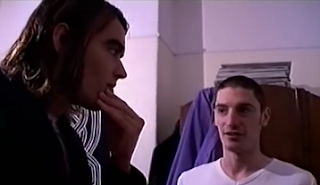 Also, not every episode is a startling revelation into mankind's inability to grant humanity to all areas of life. The 'My Old Tart' episode meanders along and, unfortunately (or maybe fortunately for elderly Wendy) nothing of any note really happens. As a result it's a gentle look at cross-generational relationships, but nothing really hits home.

So, yeah, you're probably gathering that it's a rather unique set of social concepts that Brand is running through his curiously inquisitive mind.

And it's no surprise to learn that Brand has since admitted he was drunk or on heroin when recording the series. However, we've met a few alcoholics and heroin addicts in our time and he seems surprisingly compos mentis for one who's indulging in nefarious substances. The fact that he's not just dribbling on a couch is a testament to his plucky drive.

Brand, of course, finally kicked his drink and drugs habit a couple of years after Re:Brand and has had a meteoric rise to fame ever since. Quite what would have happened if Brand had remained an addict is quite troubling and Re:Brand may have served as a troubling epitath to his spirit.

Thankfully, Brand is still at large. Therefore, Re:Brand can act as an incredibly deep and touching, low budget analysis of how we as humans interact with each other and condemn certain behaviours in the blink of an eye.

We can't think of anything that's come close to touching it in terms of brutal honesty and it's perhaps one of the best things Brand has ever done.
Posted by Telly Viewer at 5/23/2015
Email ThisBlogThis!Share to TwitterShare to FacebookShare to Pinterest