When we think about pets, we tend to concentrate on their classical attributes. Cute, furry and ridiculously loyal, we’re more than happy to cut them a bit of slack when we discover them chewing the sofa or vomiting in our designer loafers. After all, they don’t mean any harm, a fact you can glean from the unwavering innocence in their eyes. However, much like their human owners, certain pets are more prone to emotional issues than others. And, if you want to see what happens when four such pets live in a pressure cooker environment, you don’t have to look much further than Pets. 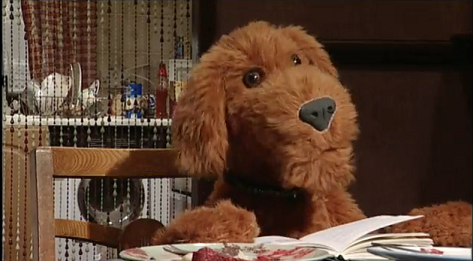 In amongst the empty dog food tins, faeces covered walls and furniture soaked in various bodily fluids, exists a disparate menagerie of foul language, violence and emotional instability. Welcome to the, quite literal, animal house of Pets.

Hamish (Ian Angus Wilkie), a sophisticated Red Setter, is eternally exasperated by the antics of his housemates. With his self-resolve continually eroded by the lunacy around him, Hamish frequently resigns himself to the idiocy of his housemates. He’s also rather handy with a vacuum cleaner hose. In sharp contrast to Hamish’s canine elegance is Trevor, a cockney Bulldog with a mouth like a sewer and a libido which would make even a randy Spaniard’s eyes water. To put it bluntly, if it moves, Trevor will have sex with it. Actually, scrub that, he’ll have sex with anything, be it a Christmas tree or a Winnie the Pooh hot water bottle. 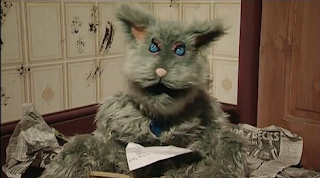 A scraggly haired Persian blue, Davina (Sally Elsden) is a rage filled kitty with an insatiable appetite for prescription drugs. Unwilling to suffer fools gladly, Davina is highly creative with her violent threats such as promising to cut off Trevor’s old chap at the root and then gouge his eyes out with it. Davin Much more placid is JP (Petros Emanuel) a curiously bald, South African parrot (he lost his plumage to Trevor in a card game) with one brown eye and one blue eye. Much more cheerful than his fellow housemates, Trevor is no less disturbing, particularly with his passion for drinking his own urine. 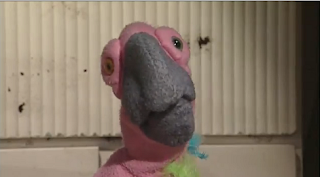 Far from chasing sticks, climbing trees and relaxing in the sun, the inhabitants of Pets embark on a surreal series of adventures. Portals to parallel universes spring up in the airing cupboard, Hamish apparently gets Davina pregnant and Trevor summons up Satan. In amongst these main narratives, there’s also time for monologues from Davina (mostly about her absent boyfriend Vince) and JP, all of which close on his love of drinking urine. Completing the eccentric asides, Trevor’s internal worms feature on a regular basis and debate such pressing subjects as the merits of Mike Oldfield’s back catalogue.

Looking after the Pets

Part of Channel 4’s late night programming strand 4Later, Pets was written by Andrew Barclay and Brian West. Two series of 13 episodes were commissioned between 2000 and 2001 with episodes airing late in the evening. Central to the production, of course, were the rod-operated puppets and these were designed by Iestyn Evans who would later become a puppeteer with The Muppets and Star Wars. 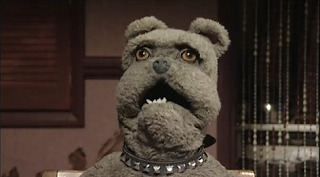 Having worked together on several late night sketch shows in Edinburgh, Andrew Barclay and Brian West had honed their skills for writing foul-mouthed adult content. Casting his mind back to the early 00s, West revisits the genesis of Pets:

“I directed a commercial using rod puppets (a couple of fish) for Polish television, and I worked on that shoot with a young puppeteer and puppet maker called Iestyn Evans. I enjoyed the experience and suggested to Andrew Barclay that we get together and write a pilot for an adult puppet series. We funded and shot a short pilot at Elstree Millennium Studios, and we emailed a download link to Darren Bender at Channel 4. He was in charge of the 4Later strand at that time, and we were looking for a late night “adult” slot. He asked us to a meeting and commissioned 26 episodes on the spot”

When it came to writing the series, the collaborative process between Barclay and West was a fairly standard affair, but, as West remembers, they wanted to sprinkle a little innovation into the dialogue they were working with:

“We brainstormed the subject matter for 26 shows together. Then Andrew and I went away for about 3 months and wrote 13 scripts each. Then we sat in a cramped, dark little office at Elstree Studios and script edited all 26 episodes together. Then we wrote the inserts. I wrote all the parrot monologues, Andrew wrote all the cat monologues. Finally, we came up with the idea that the animals should have their own unique jargon. We made a list of invented word and phrases, and then we went back through the scripts and dropped the new words in”

All the dialogue was recorded in advance at Second Sense Studios, Elstree with West sat in the control room and directing the voice work. One slight change, regarding the voices, came about due to Petros Emanuel’s South African accent having a more authentic hilarity than the originally intended Australian one. Filming took place at Elstree Studios with the entire run of episodes taking around five weeks to record. 14 hour days were not unusual, as West recollects, but he deems the experience as a lot of fun with a fantastic atmosphere.

While the offer of a third series was not forthcoming from Channel 4, West explains that Pets found a further lease of likely in an unlikely location:

“Andrew and I held world rights in Pets, so we took the show to RDF to try and syndicate it. They sold it to Fox in Australia and to MTV in Italy. MTV made a fantastic job of dubbing it into Italian, and it became a huge hit in Italy. MTV Italy later licensed the characters to develop a 'Larry Sanders' style chat show around them. Trevor hosted. Hamish was Hank on the couch. It ran for three series and turned the two dogs into big celebrities in Italy.  They even appeared in a pop video”

The most curious footnote to the Pets production history, however, would come several years later with the launch of BBC3’s Mongrels. Veering dangerously close to Pets in terms of tone and aesthetics, West had every right to feel aggrieved as he reveals:

“We pitched a new series of Pets to Mark Freeland at BBC3 and he passed, saying there was no market for adult puppet shows. A few years later Mark was the Executive Producer of “Mongrels” on BBC3. He hired almost all of our puppeteers, and got our character designer Iestyn to make all of his puppets. So Mongrels looked and felt very similar to Pets. We had two dogs and a weird parrot. They had a dog, a fox and a weird pigeon. It was so similar that many Pets fans emailed Andrew and I congratulating us on our new show. I rang the producer of Mongrels (Stephen McCrum) and he swore he had never seen Pets. I told him I didn’t believe him. Hey, that’s showbiz”

Generally the preserve of children’s television, puppets have made inroads to adult comedy on television with the huge exception of Spitting Image. And, when you think about it, it’s a real mystery as to why. With faces so cute that they represent an innocence akin to that of babes in the wood, puppets can get away with considerably more than their human counterparts. In Pets, for example, it’s much more acceptable for a puppet to deliver a line about flushing kittens down the toilet than a trained actor, so the potential to push taboos – an age old comedic device – is monumental. 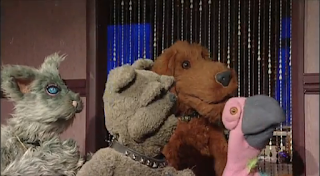 As you’ve probably guessed from the kitten flushing example, Pets is a sitcom that is not afraid to deal in the dark, the disturbing and the downright foul. 4Later, of course, is the perfect home for Pets. To those who stayed up late in the late 90s and early 00s (mostly the unemployed and students) 4Later was an institution of offbeat programming. Shows such as Vids and Bits are rightly venerated as anarchic, punk television, but Pets remains oddly forgotten in their trail.

The series, though, is quite, quite fantastic. The initial premise may feel fairly straightforward and, essentially, it is just a house share comedy. However, far from concerning itself with the mundanity of everyday life, Pets pushes its narratives to hilariously outrageous extremes. Hamish begins to metamorphise into a Mexican, Davina is murdered (the characters frequently die) and JP dreams up a beautiful idea to celebrate Christmas in March, but only if he can keep randy Trevor away from the Christmas tree. So, yes, it’s a world away from your standard house share comedy.

It would be very easy for Pets to collapse into a heap of gratuitous nonsense, but it never feels as though the series is trying too hard to shock. There’s a natural order to the insanity served up by the characters which negates any risk of tiresome nonsense. And the characters are wonderfully irreverent. In fact, West recalls that the quartet of pets were loosely based on an unhinged reimagining of Hancock’s Half Hour. Hamish and Trevor were very much cast in the mould of Tony Hancock and Sid James while Davina was viewed as Hattie Jacques and Kenneth Williams’ persona was projected onto JP. 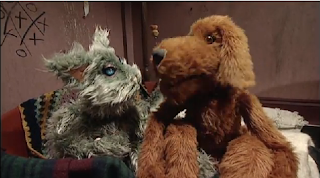 Each character is also rich in comedy. Sure, foul language and sexual deviancy is a common currency shared between the characters, but it’s all delivered with a range of ticking idiosyncrasies. Trevor, for example, is blatantly outright with his sexual frustration and won’t even think about other people in his quest for satisfaction, but JP, on the other hand, adopts a much creepier and disquieting approach.  Likewise, Hamish and Davina are much more intelligent than the others, but Davina’s outlook is clouded by a violent depression and Hamish is simply unable to escape the curious grip of his housemate’s schemes.

It all works, of course, thanks to the 10 minute runtime. There’s absolutely no time to question anything unfolding in front of you and the writers manage to pack in an unbelievable amount over the course of an episode. Movie parodies of Stargate and American Beauty are played out whilst there’s also time to take in JP and Davina’s monologues alongside the ramblings of Trevor’s worms. It amounts to a swiftly delivered blow to the head and feels like a rollercoaster gliding through the most appealing sewage you ever did see. Or smell. 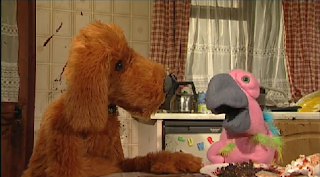 Pets may not be for everyone due to its riotously offensive tone and absolute disrespect of conventional social niceties, but, conversely, this may just guarantee it’s the sitcom for you.

Posted by Telly Viewer at 3/10/2015
Email ThisBlogThis!Share to TwitterShare to FacebookShare to Pinterest