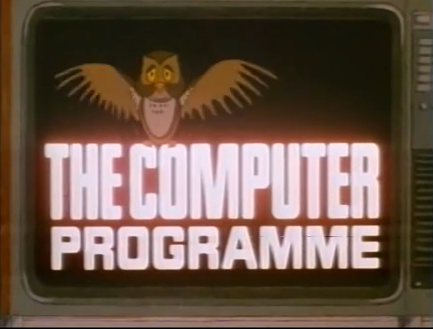 A world without computers would be a sorry place indeed. Just imagine having to ring up all those car insurance companies to compare prices. Doesn't bear thinking about.

However, such a world existed and it wasn't that long ago.

Up until the early 1980s, computers were the preserve of universities, businesses and a few enthusiasts tinkering in their garages.

AND THEN MICROCOMPUTERS ENTERED THE MARKETPLACE!

These affordable machines meant that Britain could start getting to grips with computers from the comfort of their front room. No one had any idea on how to use one though.

The BBC decided, therefore, to launch The Computer Programme as part of their computer literacy project to get the country up to scratch on working with computers.

Getting to Grips with Microchips 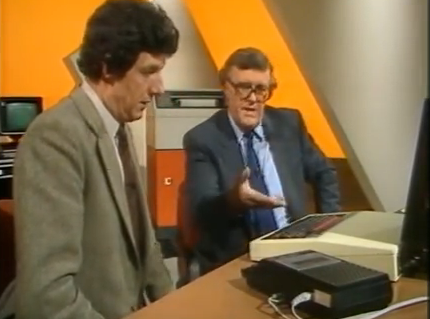 The Computer Programme saw Ian McNaught-Davis (Mac for short) and Chris Serle taking viewers through the rudimentary basics of computers. The aim was to show what computers were capable of and how they achieved this.

Whilst Mac had a firm grasp of how computers worked, Chris Serle was very much the layman with whom viewers could look at and say "If he can bloody do it, then so can I!".

Each episode would open with an example of an everyday scenario that computers could be used to handle e.g. instead of sending a telegram, why not use a computer to send an electronic message (essentially a prototype email).

Several features were shown which demonstrated computers at work in the real world. Some of these examples were rather complex such as controlling traffic lights in London, but some were simpler such as Beryl the sweet shop owner keeping track of her stock and finances.

As part of their computer literacy project, the BBC released the BBC Micro priced at £235 to accompany the series. This allowed viewers to tackle programming in the BBC BASIC language which featured heavily throughout the series. 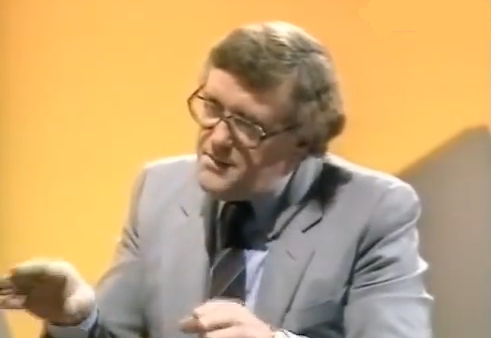 Ten episodes of The Computer Programme aired in early 1982 and had a rather curious transmission history. The first strand of transmissions were on Monday afternoons on BBC2 to cater for the school demographic, but a few weeks later a BBC1 broadcast also began to air on Sunday mornings. A week or two after this, the BBC introduced a late night Monday BBC1 slot for the series. It's fair to say they didn't want the show to escape anyone's viewing habits.

The series was repeated several times over the next couple of years, but was last transmitted in 1984. Part of the reason for this is that technology advances quickly. To counter this, a number of spin off shows followed in The Computer Programme's footsteps: Making the Most of the Micro (1983) and Micro Live (1984 - 87).

The series was also shown in the USA on PBS and a Spanish version popped up on the Catalan channel TV3. Interestingly, the TV3 broadcasts featured original material which replaced the BBC Micro with Spain's 'Dragon 200' computer.

Paul Kriwaczek, who had a strong background in education programmes such as Bellamy's Backyard Safari and Ancestral Voices, produced The Computer Programme. The moody and menacing synths which accompanied the opening and closing credits were provided by none other than Kraftwerk! Both sequences were taken from their 1981 album, Computer World. 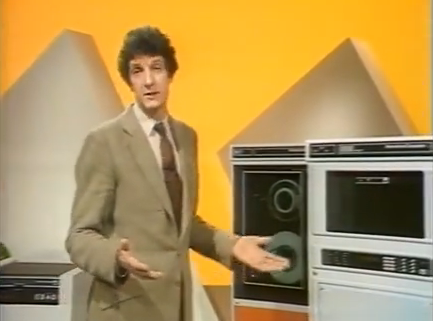 We used to potter about on a BBC Micro in the late 80s at primary school, but this was mostly just educational nonsense such as spelling games.We never really learned about what a computer was. In fact, nearly 30 years on and we still don't really.

Everyone uses computers now (a fact predicted in episode one of The Computer Programme), but we all take them for granted. All we know is that there's some wires in there and they've stopped us having to trudge round the supermarket at weekends.

As luck would have it, YouTube had all ten episodes of The Computer Programme available, so we could investigate this burgeoning age of computing.

Mac and Chris Serle are a likeable duo, not quite a double act but affable enough. Chris Serle (imagine a less sneering and younger Jeremy Paxman) looks absolutely flummoxed at times by Mac's explanations, but perhaps encouraged by Mac's winning smile, Serle slowly begins to grow in confidence. And this is exactly what viewers at home wanted to feed off. 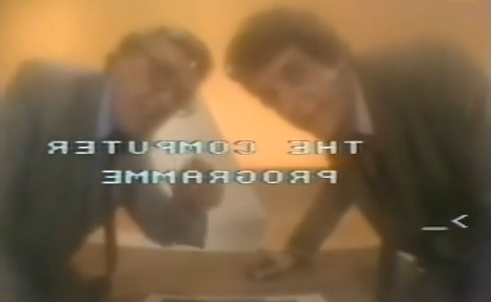 Obviously, with our 21st century eyes, the majority of the features look ridiculously dated, but this is where the nostalgic charm comes from. Even though early computers were slow and achieving anything was a struggle, it gave us such a thrill. We knew no different. It was the future as far as we were concerned. Everything was going to be okay from now on.

The show is pitched perfectly at a beginner's level, but never patronises and episodes are nippy affairs which fly by. The Computer Programme does a great job at demistifying computers and it got us thinking. Is it time for a modern update? There's still a huge section of the population who may use computers in their day to day life, but don't know their capabilities outside of Facebook.

For now, though, we would highly recommend watching a few episodes to brush up on the basics of computing.
Posted by Telly Viewer at 12/20/2014
Email ThisBlogThis!Share to TwitterShare to FacebookShare to Pinterest