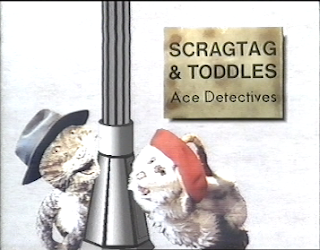 The British are very proud of their armed forces. Over the years we've defeated the French, the Spanish and the Germans to name but a few. These are great bragging rights and many British people like to bellow about this when losing football games to the aforementioned nations. However, the British armed forces can brag about much more than victory. Oh sure, there's valour, righteousness and honesty, but we doubt anyone reading this blog subscribes to those concepts. No, the truth of the matter is that the British armed forces were treated to the final adventures of Scragtag - 80s super moggy - in the curious tales of Scragtag and Toddles, Pet Detectives. 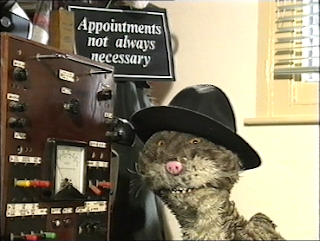 Scragtag has left behind his beloved chest of drawers and set up a gumshoe detective agency. Going against all his species' beliefs, he has teamed up Toddles - a helium voiced dog. They're also joined by another doggy named Bill Barker who has an incredibly flat face and is impossible to understand. Together they investigate such curious crimes as the theft of a rare purple banana. Behind the crimes are exaggerated villains including Hatchet the Hitman (John Altman) and Fat Sam (Dave Lee). Along the way, they visit local schools and are aided by gangs of children clad in a striking combination of garishly fluorescent jackets and spiky hair. It was the early 90s, folks. 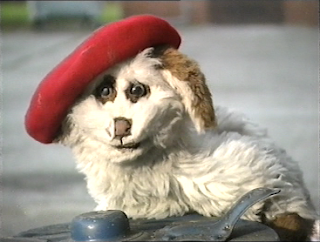 Scragtag and Toddles aired in 1991, but not on terrestrial television. And not on satellite television either. What the hell kind of channel did it air on then?! Well, the answer is: BFBS aka British Forces Broadcasting Service. Transmitting from the UK, the pick of UK TV was beamed around the world to British military bases. Original programming such as Scragtag and Toddles was also included. Marcus Kimber was, as on Scragtag and his Tea Time Telly, the driving force behind the show and the puppetry. Providing the musical cues was Vic Flick who also provided guitar work on several James Bond films. The series was produced by Chaltec Independent Productions and comprised eight episodes. A VHS was released by Chaltec featuring two episodes: Dognapped and The Case of the Missing Purple Banana. 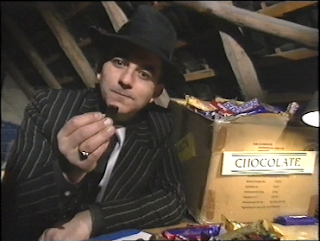 Curious British Telly has been intrigued with Scragtag since discovering him in an old edition of the Radio Times. We investigated him further and ended up watching a few episodes of Scragtag and his Tea Time Telly which aired in the mid 80s. We loved the character, a laughing cat with a neat line in attitude. Tea Time Telly had its positives, but also some negatives in that it was aimed at such a young age group and felt too simplistic at times. When we discovered that there was a further Scragtag show we had no choice but to investigate. 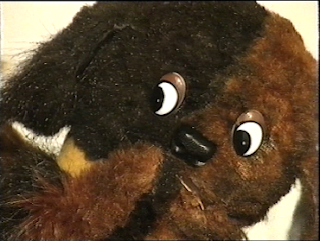 Scragtag and Toddles is a decent set of capers for Scragtag and, unlike Tea Time Telly, lets his personality shine through. The plots aren't exactly Citizen Kane, but they're tongue in cheek and provided a couple of laughs. From what we've seen, the acting isn't too bad either. John Altman is known throughout the land as Nick Cotton and his accent as an American mobster isn't to be sniffed at. Dave Lee acts it up as a manic chef, but curiously this appears to be his only television job bar a 1970 appearance in W. Somerset Maugham. The only thing which we disliked about the show was Toddles who we found rather irritating. There was always a boy (or girl) at school who had a very high pitched voice and was a wet blanket, this is essentially what Toddles is. 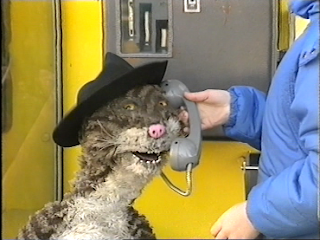 The presence of a narrative means that Scragtag and Toddles is our favourite Scragtag vehicle and we're glad Marcus Kimber kept faith in Scragtag. As far as we're aware, this was the last time Scragtag made an appearance on TV and this saddens us. By 1991, Roland Rat had more or less gone into retirement, so there was certainly room for a wisecracking animal puppet on British TV. Alas, Scragtag will have to be remembered as a missed opportunity.

In another exclusive for Curious British Telly, we've uploaded a clip of Scragtag and Toddles to YouTube at: http://youtu.be/IXRUYVpIQ4o
Posted by Telly Viewer at 8/24/2013
Email ThisBlogThis!Share to TwitterShare to FacebookShare to Pinterest