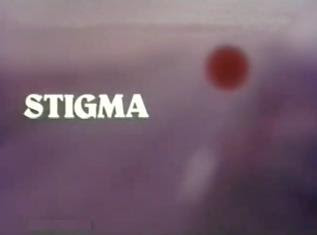 Whilst pottering about in the garden the other day, we found ourselves involved in the backbreaking task of moving a small rock a few feet. Upon lifting the rock, a number of woodlice came scuttling out in a blind panic which we found a little disturbing. There are, however, worse crustaceans to find lurking under a rock - king crabs for example. What could be worse than a decapod crustacean though? Perhaps Stigma could shine a little light (and blood) upon this thought.

The 1970s were a decade which saw platform shoes, three day weeks and the death of Elvis, but amongst all this horror was a curious BBC 1 anthology of films entitled A Ghost Story for Christmas. Airing between 1971 - 1978, each of the eight installments were tasked with recreating a classic ghost story for television. The aim was to reconnect with the tradition of telling ghost stories at Christmas - not something we've ever done, personally, but beats fighting with the family over who gets the last of the mulled wine. Sadly, the producers missed a trick by not basing the 1977 edition around the recently deceased Elvis hauting a pair of blue suede shoes. Instead, they eschewed the traditional ghost story format and went for Stigma - a supernatural slice of horror which screened on 29th December and was an original screenplay by Clive Exton.

Clive Exton's first writing credit was in 1959 for the television play, No Fixed Abode made for Granada Television. This was followed with six episodes for ABC Television's Armchair Theatre series. Known for challenging social norms in the early 60s with productions such as The Big Eat and The Trial of Dr Fancy, Exton's later years as a writer saw him writing more friendly fare such as the David Suchet starring Poirot and Stephen Fry and Hugh Laurie's turn in Jeeves and Wooster. These two periods bookmarked an unhappy time in Hollywood as a screenwriter where his best known work was Red Sonja.

This difficult spell did however produce Stigma which sees a middle class family moving into a village cottage next door to an ancient stone circle. Katherine (Kate Binchy) and her twelve year old daughter Verity (Maxine Gordon) arrive home one day to find workmen renovating the garden. Blocking the extension of the lawn is a large stone that the workmen say must be removed. A stone whose power is intimated with an ominous pan of the camera towards the stone circle as one of the workmen remarks "I wouldn't move it.". The first attempt at removing the stone is unsuccessful, but a powerful blast of wind emanates from beneath it and hits Katherine. The wind appears to send Katherine into a trance, but she gradually recovers in time to prepare dinner for Verity and her husband Peter (Peter Bowles).

However, Katherine becomes plagued by a mysterious bleeding of her skin which, strangely, has no visible wounds. She manages to keep the bleeding under control, but throughout the night she loses pints of blood and is found unconscious by Peter. The local doctor is bemused by her condition and, as he recommends an ambulance, the workmen manage to lift the stone and find a skeleton underneath. Accompanying the skeleton are several knives and the workmen deduce that the demise of this individual was not a pleasant one. Luckily, Verity is on hand to inform the workers (and audience) that she has read about how witches were murdered and buried beneath stones. Katherine then passes away on route to the hospital

Curious British Comedy has a few reservations about Stigma. The acting is the main downfall - it's as incredibly wooden and poor as anything you'll see on British television. Peter Bowles appears to be the only actor present and it's good to see him in such a serious role. He's more famous for comedy roles in Only When I Laugh and To The Manor Born, but Stigma and his small role in Survivors show how versatile he was. The camera work - ominous panning shot aside - is fairly mundane too, but again this is 70s TV, so what else would you expect?

Aside from these reservations, we were blown away by Stigma. The story itself is a rich tale taking in themes of sexual maturity and the menopause which are foreshadowed and highlighted with  symbolism. The titlescreen of Stigma features a red blob travelling towards the screen - symbolising the imminent blood - before morphing into a harmless Citroen Dyane. A strong wind is heard as the Dyane drives along the country road and at first we thought this was down to poor sound work, but later we realised this is a premonition of the wind soon to afflict Katherine. At one point, a radio presenter discussing the Voyager spacecraft, is heard to say "We don't even know what's coming out from the Earth yet." which is a subtle nod to the mysterious fate awaiting Katherine beneath the stone. Verity is at a difficult age and her determination to leave behind childhood is displayed as she stuffs a doll upside down into a vase before sneaking looks at the attractive, young workman. These little teasers slipped in by Clive Exton and director Lawrence Gordon Clark may not be noticed at first, but are worth going back over a second time to appreciate their masterful weaving.

One particular scene that stood out to us was Peter waking up in the night - unbeknownst to the fact that Katherine is bleeding to death - to find the oven turned on downstairs and a knife seemingly possessed by an unseen force. It's a tense moment where you fear the worst for Peter, but he survives and any tragedy is temporarily put on hold. The tragedy, when it does come, unravels fairly quickly, but is still full of symbolism. Katherine - complete with blood red nails - is seen to be unpeeling an onion last seen in Peter's late night kitchen scene. We suspect it symbolises the end of Katherine's life and the beginning of Verity's, but it's a little abstract to be sure. Our final praise is for the length of the story - at just half an hour, Clive Exton has managed to piece together a three act story which is never rushed or drags. Verity's explanation, at the end, about the "old religion" does feel a little bolted on to tie things up, but the length of the piece is effective and manages to pack in so much subtext it's remarkable.

Stigma is uncompromisingly bleak and feels like a breath of fresh air compared to modern television. Where these days, there would be some semblance of hope portrayed, no punches are pulled as Peter is left distraught on a roadside. The powerful wind begins to whip up again and the camera alights to the sky where the audience are forced to confront the stone circle once more as the credits roll. Stigma is available on DVD packaged with two other episodes from the Ghost Story anthology or it's immediately available on YouTube. We suggest you watch Stigma as soon as possible and learn why the least of your worries are woodlice.
Posted by Telly Viewer at 4/07/2013
Email ThisBlogThis!Share to TwitterShare to FacebookShare to Pinterest