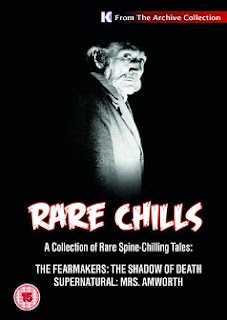 There's nothing like a bit of horror to get the adrenaline flowing through your veins and blood pumping through your heart at a rapid pace and British TV has been more than happy to oblige over the decades. From Nigel Kneale's Beasts Series through to the BBC's legendary A Ghost Story For Christmas, television has endeavoured to put the willies up us with an eerie level of precision. Two servings of British TV horror that you may not be aware of, however, are The Fearmakers: The Shadow of Death and Supernatural: Mrs. Amworth.

In the case of The Shadow of Death, you can be excused as it's an unaired pilot that was, for many years, only available on a Philips 1500 tape which had seen better days. Thankfully, the son of one of the actors just happened to have a 16mm print of the production in much better condition. As for Mrs. Amworth it appears that this was due to be part of an anthology series entitled Classics Dark and Dangerous, but only Mrs. Amworth was ever recorded and received just one airing in the mid 1970s.

Thankfully, both of these films are now being released on DVD as Rare Chills. The release is part of a new partnership between independent archive team Kaleidoscope and Simply Media. The DVD is available from 13th August 2018, but what actually lurks within?

The Fearmakers: The Shadow of Death 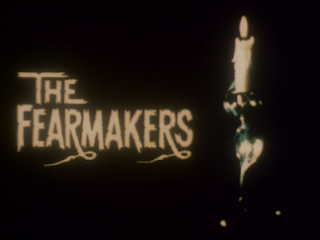 A fiendishly atmospheric tale, The Shadow of Death starts with Booth (Jack Woolgar), a broad shouldered, mutton-chopped man making his way towards a once grand, but now abandoned country manor in the dead of night. Guided only by torchlight, Booth inches carefully through the house until he finds what he's looking for: a beautiful diamond hidden beneath an old tile in a fireplace. Attempting to leave, Booth is driven back by a ferocious storm and decides to take shelter within the manor. 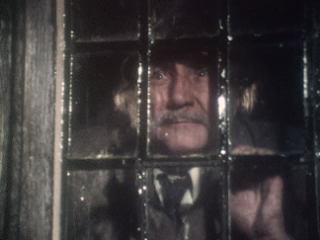 However, Booth's solitude is soon disturbed by the parka clad and mysterious Weaver (Barry Stokes) who claims he was out walking his dog when the storm whipped up. Booth, keen to dampen any suspicions, concocts a lie that his car has broken down, hence seeking shelter. Weaver wryly accepts this, but soon begins to question Booth in a manner which indicates he knows more about Booth than he initially let on. Tensions soon begin to rise uncomfortably, but lurking in the shadows is something much more unsettling that is intent on keeping the diamond for itself. 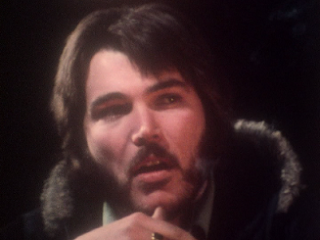 A good old fashioned ghost story, The Shadow of Death weaves a terrifying tale which benefits greatly from its production and cast. Sure, the editing is clearly made for nothing more than a pilot as the mismatched camera angles occasionally jar, but the dimly lit scenes and soundtrack combine together to leave the hairs on the back of your neck standing up as rigid as a cadaver.

Ominous percussion set against electronic squalls help to build a climatic sense of terror. And, given that this is a 16mm print that hasn't necessarily been stored correctly, the scratches and interference actually help add to the creepy terror and sense of long lost storytelling.

With the atmosphere helping to drive the chills forward, Woolgar and Stokes are provided with measured dialogue but their experience as fine character actors is perfectly pitched to underline the greed at the centre of the narrative. It's a fairly straightforward plot and the twists at play are far from exciting new devices, but, much like a professional athlete, the narrative breathes deeply and cleanly to pull the viewer into a disconcerting story.

And, when the ending comes, it's enough to cause you to never sleep without a torchlight by your bed again.

Like any classic British horror from the 1970s, Mrs Amworth takes place against the backdrop of an idyllic British village (on this occasion in beautiful Wiltshire). And it's a village which until recently provided little more than a gentle, uneventful existence for its residents.

However, with the arrival of the aloof yet charming Mrs Amworth (Glynis Johns), matters have changed in a number of ways. Firstly, excitement levels have gone through the roof due to Amworth's regular soirees and, secondly, a mysterious epidemic has hit the village leaving several inhabitants drained of all energy. 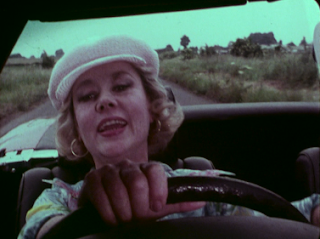 Meanwhile, David (Pip Miller) has arrived in the village to spend part of the summer with his uncle Benson (Derek Francis) and it doesn't take long for Mrs Amworth to take what she passes off as a maternal instinct in the young man. However, David soon succumbs to the mystery illness which is currently being blamed on an invasion of gnats. Benson's friend Urcombe (John Phillips) has his suspicions about the mysterious Mrs Amworth, particularly when she reveals that she's related to Elizabeth Chaston, a 17th century inhabitant of the village who was accused of witchcraft during a similar plague. 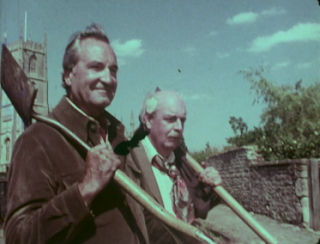 Incredibly British, Mrs Amworth benefits greatly from the performance of Glynis Johns who manages to maintain a veneer of engaging charm, but with an undercurrent of sinister intentions swirling around her veins. She can also turn from one end of the emotional spectrum to the other on a sixpence and adds a nice dash of terrifying glamour to the production. Although unremarkable in their performances, Derek Francis and John Phillips are solid actors and they engender a nice double act in Mrs Amworth which, again, is incredibly British, just take a look at their final scene as they stroll jollily away.

Mrs Amworth is a nice addition to the weighty canon of vampire narratives in existence (currently estimated to be around three million) and it has the feel of a short Hammer feature, but with absolutely no gore (a bleeding finger aside). The plot breezes along rather nicely and there's little gristle to chew on as you work your way through the slightly less than 30 minute runtime. Perhaps the narrative could be slightly more complex and contain a few more twists, but fans of British of horror are unlikely to quibble over Mrs Amworth being available in the digital age.

It's a shame that neither The Fearmakers or Supernatural (originally known as Classics Dark and Dangerous) didn't go on to produce full series. I was lucky enough to speak to the son of Jack Woolgar at a screening of The Shadow of Death last year and he told me that there's little detail as to why it was never commissioned. There's plenty in there to warrant more, but, alas, I shall never be a TV commissioner and the time has long since passed to put the series into production.

And the same goes for Mrs Amworth, it may be a little hokey but there's always an interest in horror that would have guaranteed a television audience keen on scares. Anthology series deliver plenty of variety and you only have to take a look at modern equivalents such as Inside No. 9 to see just how much interest and quality they can generate. Lost opportunities, perhaps, but at least they've been preserved to allow an analysis of where British horror was in the mid 1970s.

Curious British Telly readers can get a 10% discount on these releases by using the code CURIOUS10 when purchasing through Simply Media.
Posted by Telly Viewer at 8/12/2018
Email ThisBlogThis!Share to TwitterShare to FacebookShare to Pinterest