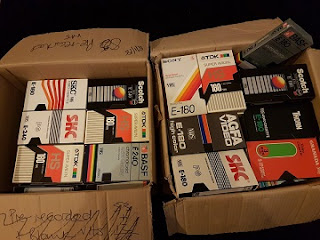 I haven't been digging through too many tapes over the last few months, but I've still managed to work my way through several hundred metres worth of magnetic tape. And, with it being such a harmless pursuit, who would possibly want to break a butterfly on a wheel? So, that's why I've managed to gather together a few curiosities for you to gaze upon and get terribly nostalgic over.

April saw the sad passing of former England captain and all round nice guy Ray Wilkins, so it was rather fortuitous that I found footage of him at his eloquent best. Chatting with Bob Wilson on Grandstand, Wilkins - who was still playing at the top level - discusses England's potential under new manager Graham Taylor.

If there's one show that I've been determined to bring back into the public consciousness then it's Jackson Pace: The Great Years. A fantastic Children's ITV sitcom written by Daniel Peacock and starring what appears to be half of The Comedy Store, footage of Jackson Pace has remained incredibly elusive. However, following tense negotiations with a man in Northamptonshire, I finally managed to secure an episode. Picture quality isn't fantastic, but it doesn't matter when such silly adventures are on offer. If you have more footage: GET IN TOUCH!

Northern Ireland haven't reached the World Cup all that often - just three times - and the last time was way back in 1986. To celebrate reaching Mexico 86, BBC Northern Ireland put together this documentary - that only aired in Northern Ireland - exploring their route to the world's biggest stage. Featuring plenty of action from the qualifying stages, it's also packed full of interviews with players including Martin O'Neill, Pat Jennings and manager Billy Bingham.

I can't imagine anyone but an archive television fan scanning through this blog, so this particular upload should tickle your fancy like no other. A complete episode of Windmill, a TV show from the mid 1980s which was presented by Chris Serle and dug deep into the BBC's archives. With Richard Stilgoe popping by for an interview, this episode looks at the subject of childhood on TV.

One tape that I recently received had several episodes of Count Duckula and The Sooty Show on, but these finds aren't that fascinating as they're all available in much better quality elsewhere. However, the real magic, as ever, comes within the little snippets of continuity footage in between the main programmes. In this case, the tape yielded several helpings of Children's ITV continuity featuring Jerry Foulkes, Jeanne Downs and, of course, Scally the Dog.

Here's one for the real TV nerds, a BBC1 closedown complete with a bizarre Ceefax fault. As the channel winds down for the evening, a ghostly Ceefax page appears behind the iconic BBC globe as the national anthem plays. And I can't think of anything more incredibly British.

You know the drill by now, if you've got any ancient VHS tapes lying around then get in touch. I might just be interested in digging through them!

Posted by Telly Viewer at 4/19/2018
Email ThisBlogThis!Share to TwitterShare to FacebookShare to Pinterest