Jonathan Hughes (Nigel Planer) and his wife Libby (Susie Blake) host the daytime magazine show Wake Up! from the comfort of their garishly 90s armchairs against the backdrop of an equally charmless 90s show home. Producer Jeff Shreeve (Stephen Moore) would love Wake Up! to showcase the chemistry of Jonathan and Libby, but they've been running on empty for some time now. Accordingly, the duo's life is characterised by a creeping sense of misery, compounded by the Jonathan and Libby brand they feel beholden to. Maybe it's time for them to Wake Up! 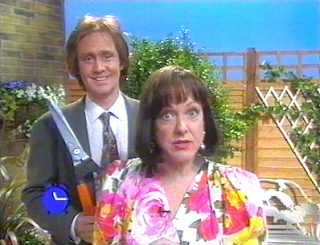 Wake Up! was a pilot episode produced by Nigel Planer and Jamie Rix's then fledgling production company Elephant Productions for Tyne Tees and aired on ITV at 8.30PM on a Thursday. The idea behind the Wake Up! universe was devised by Planer (who seems to have been actively involved in most of Elephant's output), but the actual pilot - titled Let's Get Divorced - was written by Andrew Nickolds who had previously been employed as a narrative gag merchant (as they're known in the biz) on The Lenny Henry Show and Agony.

Remaining a one-off pilot, Wake Up! never made that magical (and no doubt lucrative) transition into a fully formed series and no repeats were forthcoming. Not surprisingly, there's very little mention of the show online and I, for one, certainly didn't watch it at the time. Well, not that I can remember, but I was heading off on my first every holiday abroad the following week (to France with school) and my thoughts were mostly occupied with what stickers and trading cards I would find for sale there. Thankfully, the world of archive TV is a strange old beast and I just happened to stumble across the pilot on an old VHS tape. 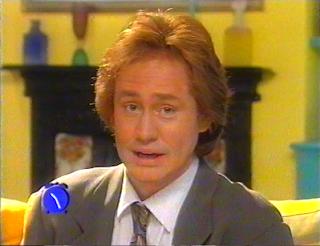 The Young Ones is probably one of my all time favourite comedies, it invigorates me with its punk energy and its surrealist nonsense leaves me rolling on the floor laughing with such ferocity it feels as though my diaphragm is about to rupture. So, yeah, I love it. And everyone involved in it. Therefore, a comedy with Nigel Planer comes complete with a direct link to The Young Ones and it's something that simply can't ignore. Note to readers: if I ever become lackadaisical about such matters please feel free to take me out the back and give me a Chinese burn. Anyway, the show...

The most obvious source material for Wake Up! is This Morning during its Richard and Judy phase, so Wake Up! certainly has plenty of comedy potential not just due to the mundanity of daytime magazine shows, but also due to Richard Madeley being such a real life caricature. And Jonathan Hughes certainly takes both these aspects and runs wildly towards a cliff edge with them; that's why we get interviews with Ned Hawking (the country's foremost expert on privet hedges) and Jonathan bumbling his way through (he doesn't even recognise Ned several minutes after their interview). 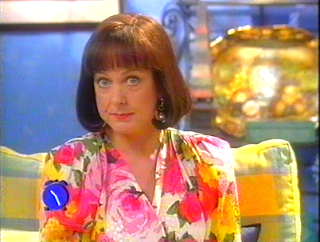 Central to Wake Up!, of course, is the turbulent relationship between Jonathan and Libby which has clearly been strained for many, many years. Barbs fly between the two on and off the air and this hints at the no doubt immense pressure that a relationship in the public eye must bring. And Planer and Blake are both in fantastic form here, playing to their characters strengths to create plenty of lively conflict. However, this tension has a tendency to feel a bit too uncomfortable and this factor seems to find its footing in Jonathan's character.

Sure, we all love a sitcom monster, look at Basil Fawlty, David Brent and the man who shares a significant amount of DNA (and taste in terrible jackets) with Jonathan, Alan Partridge, but all of these characters have a particularly poignant and tragic air to them. As a result, we can't help but love them and want to see these obnoxious gases of humanity succeed. Jonathan Hughes, on the other hand, is just plain nasty with absolutely no redeeming features, essentially just arrogance, affairs and sneers on legs. 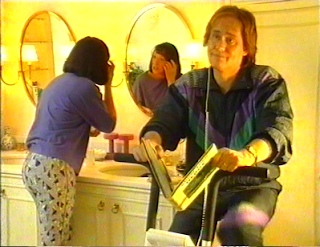 Libby, of course, is much more likeable and there's definitely a healthy dose of sympathy prescribed her way, so maybe Wake Up! could have been much more fascinating if the story was told primarily from her angle - a woman robbed of a life (as insinuated by the makeup girls) due to her being shackled to Jonathan and expected to stay there. It could have provided an intriguing insight into the world of relationships in showbiz, but Wake Up! never continued and, given the divorce storyline in the pilot, I'm not entirely sure it had legs. 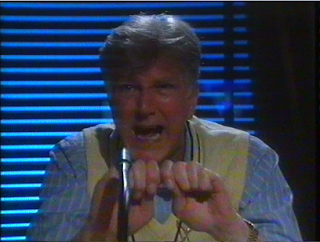 Naturally, pilots are never the finished article, but just a few months later Knowing Me, Knowing You aired and the tragic, egotistical television presenter was taken to a whole new dimension. One which rendered anything even remotely similar as impotent on sight and I doubt anyone else would wish for anything different.
Posted by Telly Viewer at 11/22/2017
Email ThisBlogThis!Share to TwitterShare to FacebookShare to Pinterest