When I was about 3 I had a good gaggle of friends behind me: Jonathan Stone, Adrian Tearle and Craig Nelson. Between us, we could jump off things, go down slides and scoff Party Rings like no other - we were kind of like the pre-school edition of The Rat Pack. However, whilst my mates were certainly a slick bunch (Jonathan even had a Mr Freeze), they weren't exactly endowed with magical powers. And this was always a problem when we wanted to bring snowmen to life (Mr Freeze aside who was a cool character in his own right).

It was particularly frustrating as I knew it was possible for a young boy to have friends with amazing abilities which confounded the norm. After all, I'd seen it on television and, back then, if there was one thing that I was sure of it was that EVERYTHING on television was real and possible. And one little guy who seemed hellbent on stretching the boundaries of reality was The Little Green Man.

Sitting in a comfy armchair one evening, Sidney Keets (Skeets to his mates) is whiling away the hours with an engrossing read when his concentration is suddenly disrupted by an unusual commotion outside his window. Poking his head out the window with all the vigor of the very best nosy neighbour, Skeets' world is flipped turned upside down when he sees a hyper-illuminated space ship flying all over the local neighbourhood before landing in his garden. 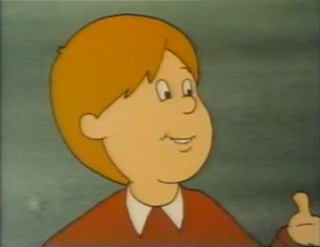 Not the least bit petrified of the potential that he could be vaporised in an instant or have his brains pickled for an analysis beyond the Milky Way, Skeets rushes outside to see what this intergalactic invader wants - don't worry, it's nothing like that awful episode of Beadle's About where Jeremy Beadle lands in a garden in Chipping Sodbury for a cup of tea. Anyway, who, if not Jeremy Beadle, is in this spaceship? Well, if it isn't The Little Green Man (his moniker perfectly describes him) and Zoom Zoom who is a, uh, little fluffy ball of yellow energy? 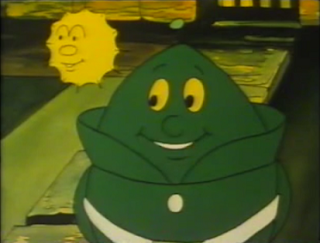 Greenie (as Skeets calls him) has come from the planet Zombazan, described as "a great way off", and the reason he's landed in Skeets' back garden is because he's on a mission to learn about Earth children and their myriad peculiarities - maybe it's part of a grand plan to enslave the earth, but Greenie never elaborates on this. To preserve Greenie's anonymity and no doubt keep him out of the US government's clutches, Skeets is the only human blessed with the ability to see Greenie.

Together, Skeets, Greenie and Zoom Zoom will go on a series of amazing adventures which take full advantage of Greenie's magical powers as they bring snowmen to life, go through the looking glass, help out a Duke, take a trip to the circus and even build a sandcastle. Hopefully, Greenie will learn everything he needs to know and Skeets will emerge with brains still safe ensconced in his skull. And that always makes for a nice afternoon.

The Little Green Man aired as a 13 episode solitary series and was first shown in 1985 in the Thursday 12pm slot on ITV, once the series had finished it was replaced by Fox Tales. Repeats of The Little Green Man followed in 1986 and 1988 with episodes airing in both the lunchtime slot and the Children's ITV afternoon strand of programming.

The series - produced by Central Television and Pentagon Motion Pictures - was created and written by Matthew Smith who is perhaps best known as being one of the foremost authority figures on the JFK assassination and has written several books on the subject. Back in the early 80s, Matthew Smith was working as a lecturer when he came up with the idea of The Little Green Man as he told website Jedi's Paradise:

"While attending boring meetings at the college at which I lectured, my pad was invariably covered in doodles of a character I became rather fond of. I was struck by the interest of the office staff who gathered up the waste paper afterwards, and the doodle became the Little Green Man.

I wanted to write stories about a character from outer space. I had young children in mind as my audience and my objective was to create stories which were totally wholesome, which carried some kind of message which would help children, and if possible keep the interest of grown ups who watched with the children.

Jon Pertwee - who provided all the narration and voices - had previously worked on an animated pilot called The Adventures of Sir Ned the Knight which was also written by Matthew Smith, so this initial relationship helped smooth Pertwee's path into the show. Smith told Jedi's Paradise that he has fond memories of producing Pertwee's voice work for The Little Green Man and then heading out to a Soho restaurant with him for lunch - boozing with a classic Who, could it get any better? 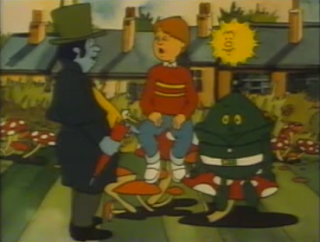 Despite The Little Green Man managing to achieve 7.5 million viewers at one point, there was no second series despite Central pushing for more. Due to the machinations of television production, Smith was having to stump up money of his own to pay for the production and it was not a viable move. Smith eventually sold the rights for The Little Green Man to a Swiss buyer and he now only owns the music rights. 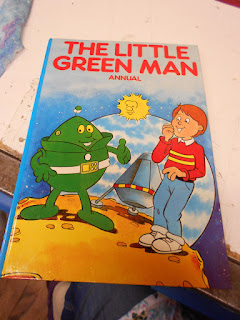 Before the rights had been sold, a small amount of merchandise was produced and this included books, annuals, pyjamas and even a Greenie lolly - if anyone has an ancient Greenie lolly stored in their freezer then please get in touch!

Is There Life on Zombazan? 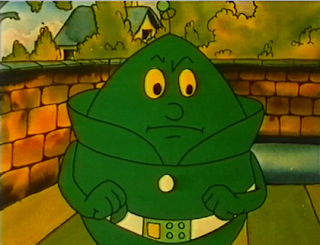 So, why has it taken so long for me to write about it? Well, the main problem was the lack of available footage.

All I could find were a few tiny, tiny clips on YouTube and nothing else - I found a couple of snippets on old VHS tapes too, but this was of very little use in carrying out the type of extensive critique I thrive upon - I'm not known as the Brian Sewell of retro television for nothing. Oh, sure, I could have watched some at the BFI, but I kept booking up to watch other odds and sods and there was the tantalising prospect of getting hold of the official VHS of The Little Green Man - always preferable to the BFI as I can actually keep the footage to review. 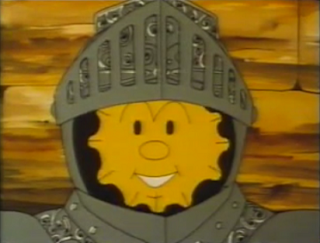 However, The Little Green Man VHS is a difficult tape to track down. The only copy I could find for sale was priced at around £25 and this was far too much, it was merely exploiting the age old supply and demand factor rather than any intrinsic value. Anyway, eventually, someone ripped a copy of this tape to YouTube, so I was finally able to rewatch several episodes and wax lyrical like the low rent Brian Sewell I am.


I'm a huge Doctor Who fan, of course, and I also used to love Wurzel Gummidge, so it kind of felt that Jon Pertwee - along with Brian Cant - was always pottering away in the background of my childhood in some form. And Pertwee had a voice which was just perfect for bring animations to life (see also SuperTed), so he certainly doesn't disappoint in The Little Green Man. With his wonderfully eccentric voice packed full of both burbling lilts and a determined confidence, he immediately brings an individuality to all the characters. 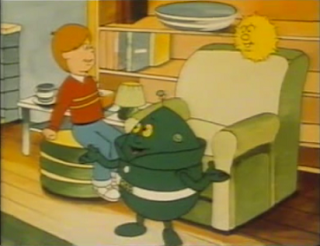 Pertwee's vocal magnificence is complemented by Matthew Smith's melodic soundtrack which, whilst simple, sums up the gentle brilliance of the series with it's jaunty, jangling stabs of keyboard and synths. The theme tune, kickstarted by a jaunty and infectious burst of whistling soon segues into a chorus of children singing (pupils from the Trinity Comprehensive School, Nottingham) over what sounds suspiciously like an old time fairground organ tune. And it's quite, quite brilliant, still rattling around my head for several days after hearing it.

Soundwise, The Little Green Man is a fantastic affair, but what about the animation? Well, it's a curious affair with the fairly simplistic main characters placed against backgrounds which, at times, are remarkably detailed and, with their watercolour flourishes, look highly professional. Smith remembers having to use a variety of animators which he believes left the animation lacking a certain identity, but the only complaint I have is that the proportions of the characters and their surroundings are sometimes at odds - early episodes of The Simpsons suffer this as well though, so it's not exactly a death knell for a series. 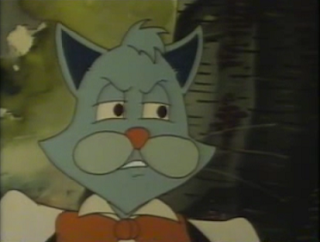 It's time to get to the nub of The Little Green Man, though, as it is after all a series of stories, so what are these stories like? What really endears the series to me is its slightly surreal edge, Greenie's magic powers open up a whole world of imagination to help bring the fantastical to life. In particular, the episode which finds the gang venturing through the looking glass and into a world of blue faced policeman and anthropomorphic cats is exactly the kind of thing I wanted to liven up lunchtimes and, to tell you the truth, as an adult it's equally thrilling to have your mind let off its leash.

And, as with all good children's TV, there's a healthy dose of morality infused within the narrative pursuits. Skeets, Greenie and Zoom Zoom seem to be falling over themselves to help rescue families on the precipice of drowning and, as for helping dukes raise funds to keep their castles maintained and running, they're absolutely cock a hoop to get stuck into that. It's a wholesome approach to teaching children the importance of altruism and its delivered effectively thanks to the dreamy sense of wonder informing the team's exploits. 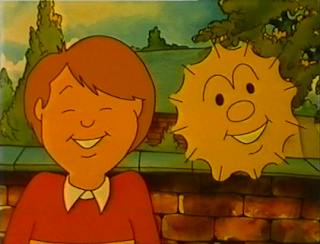 A one series wonder then, but a series which had the potential for many more gentle, yet amazing adventures. Due to the lack of clarity over the series' rights, it's unlikely that a commercial release will ever follow and the chance of a reboot is even more unlikely. However, there are 13 episodes of brilliant adventures out there which are a fine addition to the vast riches of 1980s children's TV, so let's try and uncover a few more of these episodes. And then maybe Greenie, Skeets and Zoom Zoom will be able to claim a little more of the recognition they deserve.
Posted by Telly Viewer at 8/14/2017
Email ThisBlogThis!Share to TwitterShare to FacebookShare to Pinterest