George Hutchenson (Derek Nimmo) and Beth (Nerys Hughes) were married for several years and, as happens during wedlock, this marriage was consummated and bedroom activities recommenced at least once more as they had two children in the form of Clare (Deborah Farrington) and Jenny (Lorraine Brunning). 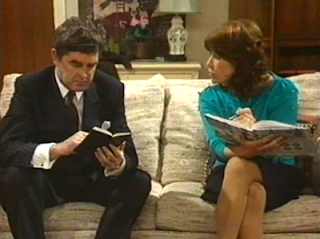 After seven years of marriage, George and Beth parted ways and both remarried: George to Millie (Angela Douglas) and Beth to Bruce (Clifford Earl). However, both of these second marriages also ended in divorce, so it's fair to say that George and Beth aren't having much luck when it comes to domestic bliss. And you'd be forgiven if they gave up on the whole marriage lark.

But they're gluttons for punishment and they're going for third time lucky. And this time George and Beth are revisiting their first marriage and getting remarried. 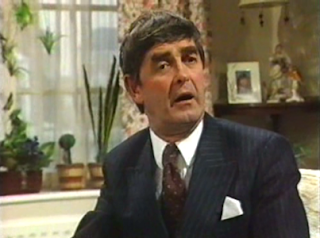 Naturally, this is a fairly awkward proposition, not just in advising the whole world that they're embarking on this huge commitment once more, but also in ensuring that past tensions don't come bubbling to the surface and send this latest punt at happiness off the rails. It's a tough ask due to the myriad factors working against them, so will they make it?

Seven episodes of Third Time Lucky were written by Jan Butlin (Life Begins at Forty, Hell's Bells, No Strings) and was produced by Yorkshire Television. The series was directed by Graham Muir who brought a huge amount of experience to the table having worked on countless TV shows as a producer since the 1950s.

Lorraine Brunning remembers the opportunity to audition for the role of Jenny coming about thanks to a previous role she had just completed:

"I had just finished filming a Mike Leigh BBC Play for the Day called Home Sweet Home and any association with Mike created a buzz around the actors involved and that led to me being asked to audition for the series. I believe I had a couple of meetings with the Director, Writer and Producer and had to read with Derek as he had final say"

Episodes went out at 8.30pm on Friday evenings, but the series was never repeated on terrestrial television. The series was later repeated on cable channel Carlton Select, but hasn't been since and is currently only floating around as bootleg DVDs or online torrents.

I was only actually present on planet Earth for the very last episode of Third Time Lucky and I can't remember watching it - this is either down to that pesky infantile amnesia or, more likely, I was probably crying for milk and testing the boundaries of my parents' patience. Nonetheless, I'm constantly sniffing around - like a pig for truffles - for old British sitcoms, so I was intrigued when Third Time Lucky ended up in my lap. 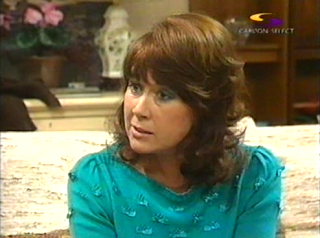 The epitome of a plummy voiced twit, Derek Nimmo injects George with the requisite level of self-belief to place his berkish personality up on a wobbly pedestal. It's a fantastic performance and one which owes much to his vast experience in the world of comedy. Teasing out all the ticking idiosyncrasies of George, Nimmo manages to display all the necessary confidence and moral superiority to set himself up for tumble after tumble. 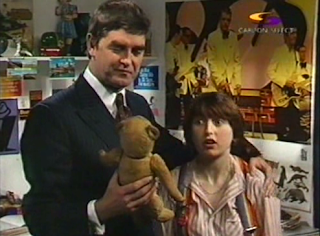 Looking as beautiful and gorgeous as she ever has, Nerys Hughes is another stalwart of British comedy and she plays her alternating roles as matriarchal figure and lover with ease. At times, she's somewhat sidelined as the focus tends to be on George, but she's been granted a strong personality and makes a fine opposition for George. Ultimately, she wants happiness in marriage and this desire manifests itself in the utter frustration at George's twittishness. 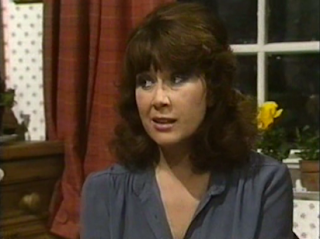 The Hutchenson daughters also deserve special mention, so let's take a look at the girls whose burgeoning maturity is causing poor George all types of headaches and bafflement.

Clare's desire for independence and the chance to charge headlong into the adult world causes the requisite dose of parental angst for George, particularly her determination to start having sex with her boyfriend. It's a decent performance by Deborah Harrington as Clare and she plays it with all the misguided confidence of the very best teenagers.

Jenny has less impactful plot strands, but Brunning brings a real level of pluck and intellect to the role as well as some SUPERB rainbow braces; she keeps George on his toes and confounds him at almost every turn, so it's a shame she never became a leading woman as she's got a natural talent for comedy. For Brunning it proved to be a highly exciting role as she explains:

"I was very familiar with both Derek and Nerys of course and it was a little overwhelming to be working with them so closely. For me, I was such a fan of The Liver Birds that meeting Nerys was particularly exciting. I was fascinated by Derek’s approach to comedy – he was very professional and precise when it came to timing his gag lines. He had a set rhythm which helped with his delivery.  I found watching him useful for my own work"

And it also acted as a fantastic learning experience for Brunning who was able to hone her acting skills through the demands of the weekly recording sessions:

"I learnt to play for the camera and to a live studio audience at the same time. I had only been involved in theatre and TV but not this hybrid. The importance of getting the first take as good as you can, so you got the big laugh, as a second take would lessen the audience energy. Also the importance of resilience for an actor – I had to be on my game as so much was invested in each Thursday night recording – you couldn’t let the side down" 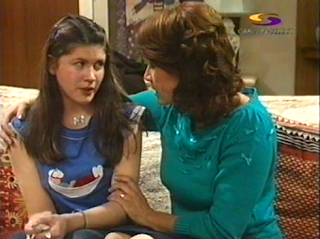 Perhaps the two characters who seem crowbarred in are Millie and Bruce, the respective partners from George and Beth's second marriages. Whilst the performances from Angela Douglas and Bruce Jenkins both owe much to their incredible CVs (particularly that of Douglas), it feels as though they're only there to rib and tease George. Ex-lovers can be difficult, dramatic beasts, so it feels like a missed opportunity to bring an intriguing and very serious level of conflict into the comedy. As it is, they pop up, crack some jokes and then disappear with a cheery spring in their step.

In fact, Third Time Lucky is a very cheery sitcom. There's little room for any gloom and instead we're treated to the chortlesome exploits of George as he stumbles through plots which are clearly indebted to 1970s farce. All the usual suspects are there: George is horrified by Clare's relationship with her boyfriend, he struggles to get to grips with new workplace concepts introduced by the firm's Japanese owners and, of course, he has to combat all the well established tensions with Beth to make sure they tie the knot again. 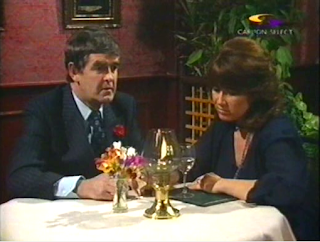 And it's this pursuit of making it "third time lucky" which brings a pleasing level of sweetness to the series. Everyone pursues happiness and we all make terrible decisions which we believe will achieve this, but Beth and George genuinely seem as though they should be together and this is thanks, mostly, due to the chemistry they pair conjure up on screen. This chemistry spread through the entire production as Brunning recalls:

"It was very warm and positive. I believe Derek and Nerys were absolutely thrilled to work together and they had great hopes for the series. I remember the writer Jan Butlin being around a lot and there seemed to be no expense spared – for example bringing in Peter Skellern to write the music etc. They all wanted this to be a classic and they worked hard to achieve that.

Sadly it didn’t quite work out that way, but there was lots of social and lots of great supporting actors who joined us over the weeks – Gerald Flood, Clifford Earle and Angela Douglas etc. As a young actor it was thrilling to be around these pros who were at the top of their game. I was especially fond of Angela who was and is the nicest person alive. Warm and funny, vulnerable and real"

In fact, "warm and funny" probably sums up the Hutchenson family more perfectly than any other combination of adjectives. They're a delightfully lower middle class family and, whilst their conflicts may seem a little middling, there's a simplicity to them and there's never any real nastiness on display - perhaps it's not a realistic depiction of strained relationships, but when has TV ever bowed down to the restrictions of reality?

Slight spoiler here, but Beth and George don't quite manage to make their third marriage (due to issues beyond their control), so I suppose there was room for a second series. However, it would have been treading the same old ground as Third Time Lucky is a sitcom very much indebted to its situation rather than the characters.

George is certainly a fine creation, but there's not really anything about him that stands out aside from ticking the usual boxes for a leading comedy man - he's no Victor Meldrew, David Brent or Father Ted Crilly, all characters who demanded further explorations and became part of the nation's consciousness.

The possibility of a second series was hanging in the air, but Brunning isn't exactly sure why it didn't materialise:

"Yes, there were plans for a second series as we had options in our contracts. Obviously the options were never taken up – I assume the ratings weren’t great. I think the series was more suited to a 1970s audience, not an ‘80s one. Comedy had moved on and it was probably a tad too cosy for that decade"

Third Time Lucky isn't a perfect sitcom and I doubt it would come in my top 10 or 20 British sitcoms, but there's absolutely nothing offensive about it. It's a family friendly sitcom and whilst this sub-genre of sitcom can be an infuriating entity (see Big Top, actually, thinking about it, don't bother) Third Time Lucky is an agreeable affair.

There's nothing revolutionary swilling about in its seven episodes, but the fizzing performances and gentle plots make it a perfect sitcom to drink tea to (there's a whole new sub-genre in itself: tea drinking sitcoms) and chuckle along heartily to. So, seek it out, clear a Sunday evening and stick the kettle on.
Posted by Telly Viewer at 7/02/2017
Email ThisBlogThis!Share to TwitterShare to FacebookShare to Pinterest