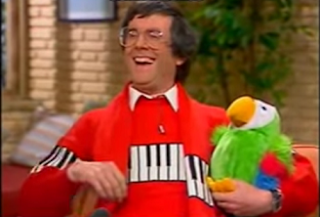 The 1980s are synonymous with many things, but, once you get past Thatcher, AIDS hysteria and George Michael's fax machine, you soon find yourself examining the fashions. And, Adidas trainers aside, it was a pretty horrendous time for wrapping yourself up in the fabrics which defined the decade.

Few families can boast a photo album from the 1980s which doesn't include a collection of abysmal tracksuits, stonewash jeans and, more importantly, jumpers which are so unbelievably dull or just downright grotesque that they feel like a vulgar attack on our digestive systems.

However, at the time, these disgusting, woolly manifestations of bad taste were beloved by millions. And, in particular, they were adored by people appearing on British TV. Now, maybe I'm just feeling particularly sadistic or perhaps I feel that maybe, beneath all this hideousness, there's actually a hint of style and elan that I could appropriate for the modern age.

Either way, it's time to take a look at 22 of the most hideous jumpers on British TV in the 80s! 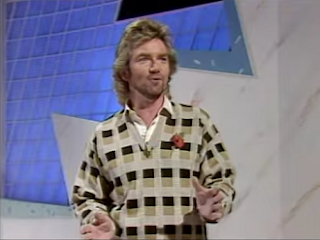 Noel Edmonds is the Don of terrible knitwear, so it makes sense to start with the bearded wonder himself. And we find him in fine fettle wearing an interminably dull collection of browns and beiges all wrapped up in a tedious crisscross pattern which leaves him looking like the most boring chocolate bar ever to have existed. 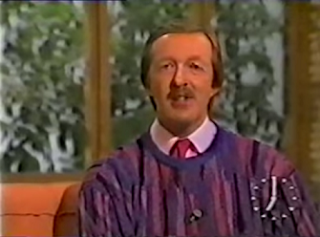 Those at the top tend to stand out, but not always for the right reasons. Take Mike Morris, for example, who had managed to carve out a career which led to him presenting ITV's Good Morning Britain, but still found time to pull on a jumper which - with it's purple, lilac and black stripes - appeared to have been based on the loudest and campest tiger in jungle. 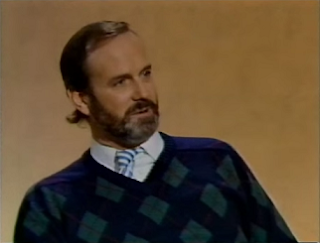 Sure, he may have written and performed some of the finest comedy ever to be transmitted in the UK, but there's no excuse for wearing an argyle jumper outside of a golf club. Especially with an off-centre tie... 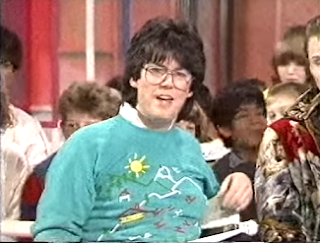 I really have no idea what Mike Read is playing at here. He appears to be celebrating a recent skiing trip to the French Alps through the medium of a jumper. And, judging by the repulsive colours on show, it must surely have been the most horrendous holiday ever. 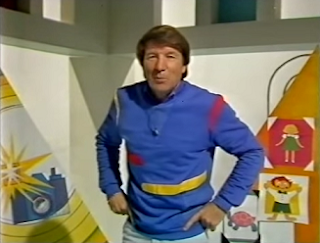 Although the shoulder stripes are pretty neat, the designers of Don Spencer's jumpers seem to have given up on the rest and just slapped on a couple of randomly placed stripes. Okay, it's minimalist and almost Mondrian-esque, but it feels unbalanced and awkward. 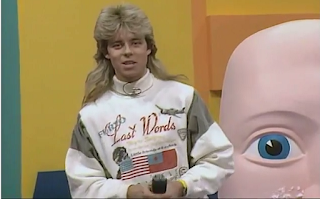 If you're able to draw your eyes away from Pat Sharp's iconic mullet, you'll notice that he's wearing a jumper that can only be described as "off its tits". There's a plane, a US flag, some other flag and the ominous slogan of "Last Words" above it all - an LSD experiment gone wrong? 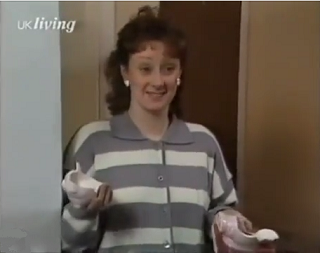 Chrissy Rogers (Eithnie Brown) had barely been in Brookside Close for five minutes when she unveiled this particularly dull jumper. With its dismal monochrome stylings, it was a jumper which Phil Redmond hoped would reflect the harsh realities of life for working class scousers in the late 1980s. Probably. 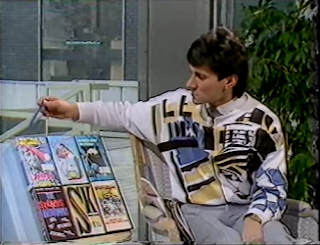 You can try to promote the latest VHS releases all you want, Coia, but all we're interested in is the best cure for a migraine after being subjected to your painful jumper. It's beyond all description or comprehension, just what the hell is it? French? 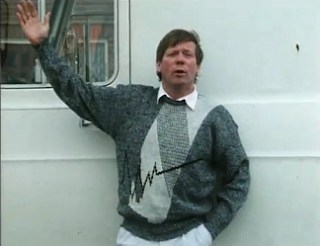 Billy Butler's jumper appears to be displaying a line graph which indicates the indominatable rise of The Chuckle Brother's bank accounts, but it's difficult to be sure as the melange of tedious grey shades will have you falling asleep within seconds. 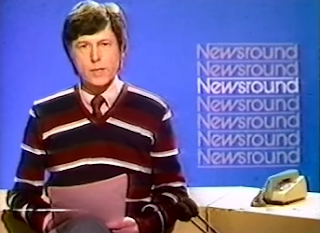 There are three things you need to know about John Craven:

1. He was on Newsround
2. He made up 55% of the news 'off the cuff'
3. He did a nice line in nasty jumpers which led to him being dubbed "The Noel Edmonds of the News" 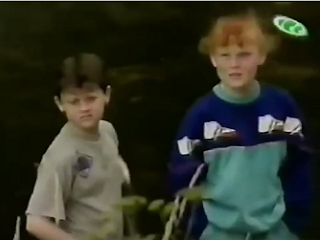 Spuggy (Lyndyann Barrass) has really gone to town with this jumper which combines navy blue and turquoise to set a foundation of crappiness, but then delivers a WTF masterstroke by decorating it with... some high top trainers? 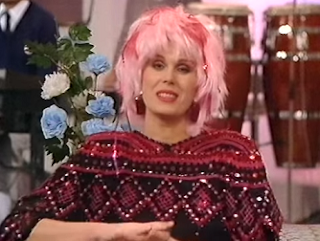 Okay, it's Children in Need, so perhaps I shouldn't be too harsh, but it's the 1980s and this jumper existed in all it's vile glory and, for the sake of future generations, should never be forgotten. 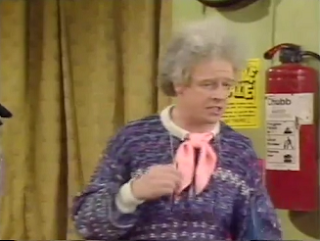 It was on Christmas Day 1987 that the Queen asked the nation to embrace tolerance and forgiveness as part of her yearly speech. However, one thing that I refuse to either tolerate or forgive is this purple monstrosity which has engulfed poor Les Dennis. 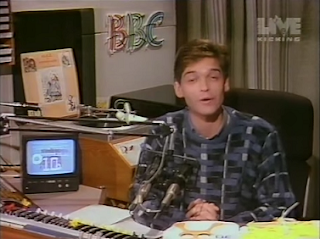 Phillip Schofield has been gracing our screens for over 30 years, but whereas these days he's a well dressed gent, back in the days of The Broom Cupboard he looked like he'd raided a charity shop, one which was running an "ALL STOCK MUST GO!" sale. 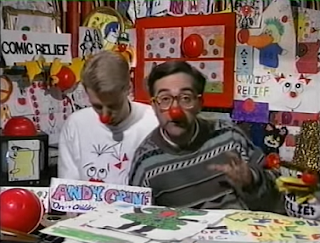 Cluttering up The Broom Cupboard with distasteful jumpers wasn't, of course, the preserve of old Schofield. In 1989 Tony Robinson paid a visit whilst wearing an incredibly awful jumper - note how Andy Crane is hanging his head in shame at the jumper fiasco unfolding in front of him. 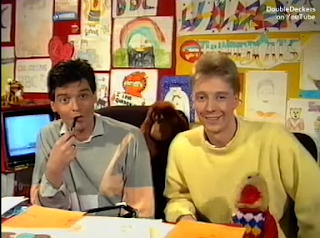 Dear God, it actually gets worse... 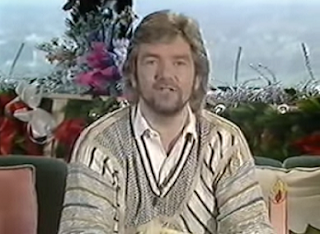 Greeting the nation on the morning of Christmas 1984 was Noel Edmonds and, true to his awful knitwear pedigree, he was sporting a jumper which had been hastily constructed from the offcuts of a particularly dull accountant's carpet. 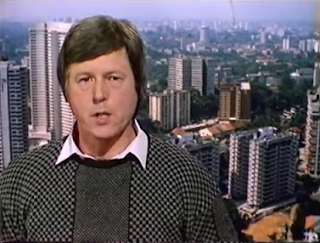 Craven strikes again and this time he's wearing a geometric check print jumper. Now, it wouldn't be that bad if it was only the travel sickness inducing check print that was on offer, but why has a strip of even smaller geometric print muscled in on the action and smeared itself down the front of the jumper? How did anyone at the BBC think this would help children absorb the news and not suffer vertigo? 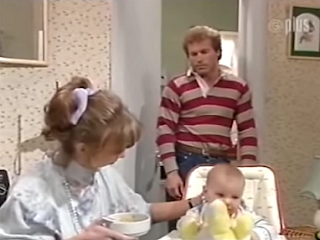 Whilst the bold horizontal stripes help make Brian Tilsley (Christopher Quinten) look like a rough and ready rugby player, the masculinity provided by this jumper is somewhat tempered by the shades of fuschia. Certainly not one for the scrum. 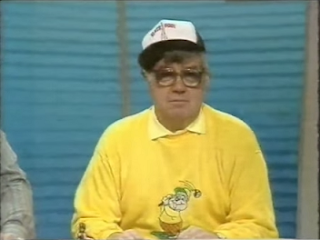 Frank Carson was a man who had comedy running through his veins, but, at times his fashion sense was truly flowing through his lower colon. And on A Question of Sport he once conjured up a canary yellow jumper - bad enough on its own - complete with a golfing beaver on the front. Truly, this is the encapsulation of 80s fashion madness. 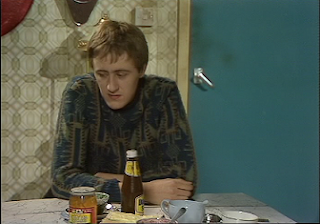 A picture says a thousand words and this is never truer than here, see how Rodney (Nicholas Lyndhurst) has a glum expression painted across his chops which reflects the patterned abomination of a jumper he's slipped on. 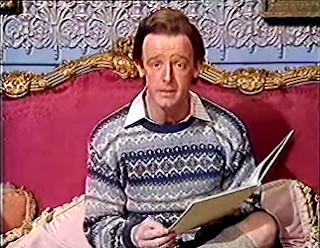 You can't keep a bad jumper aficionado down, so it's no surprise that Les Dennis is back wearing what can only be described as an oversized tea cosy with arms.

Due to an oversight on my part, there was no Gyles Brandreth jumpers in the original posting. However, due to public outrage, this has been rectified and we can now celebrate Gyles' inimitable style. 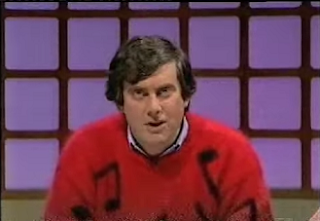 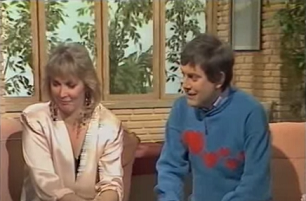 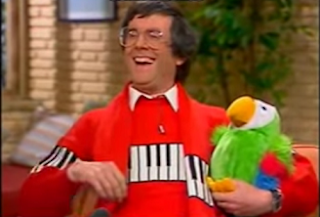 I've covered some utterly hideous jumpers here, but which ones would you secretly like to own?
Posted by Telly Viewer at 10/02/2016
Email ThisBlogThis!Share to TwitterShare to FacebookShare to Pinterest