We don't know about you, but we don't half love dogs.

BUT WE COULDN'T EAT A WHOLE ONE! LOLROFLOL!

No, seriously, we love dogs and we're pretty sure you do too. Unless you're one of those cat lovers, but, well, we suppose Custard of Roobarb and Custard fame was a right cackling enigma if ever there was one.

Anyway, we're getting sidetracked by that curiously retro tv mind of ours. You see, the real reason we've gathered round the great British TV alter today is to take a ganders at Fred Basset.

Unless you've fallen out of the CAN'T GRASP THE BLEEDING OBVIOUS tree, Fred Basset is a basset hound - that's a type of dog if you're still dusting yourself down from your fall. 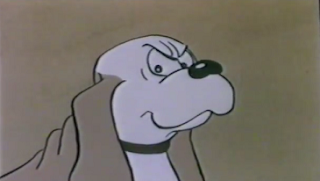 And he lives the classic dog lifestyle. Chasing cats, stealing sausages, jumping in ponds and being faithful to his dog food wielding owners.

Yeah, and uh, that's pretty much the entire synopsis out of the nutshell and before your hungry, British TV loving eyes.

From Comic to Screen

Good old Fred Basset, of course, is best known for his long running comic strip in the Daily Mail first created by Alex Graham and, after his death, continued by Michael Martin.

But when exactly did this TV adaptation start digging up the marigolds? Well, it was first aired in Spring 1977 on BBC1 in the 5.35pm slot and was a collection of 20x 5 minute episodes.

It received a few repeats up until 1981 on the Beeb, but was later shown on Channel 4 in an early morning slot. 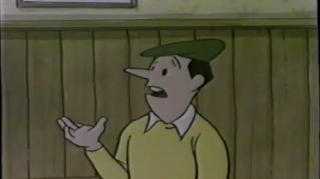 The team behind the cartoon series was Bill Melendez Productions who also produced The Perishers and continue to produce commercials to this very day.

Bringing an absolutely ridiculously long CV of starring in British films was Lionel Jeffries to bring his well spoken Southern tones to voice the thoughts of Fred. Victor Spinnetti and Ann Beach were also on hand to fill in voices of various other characters.

A VHS release came out in the early 90s on the Castle Vision label and collected together 10 of the episodes. This has been ripped and is currently on YouTube, but no other episodes are available.

When we were about 9 we discovered a few dusty copies of the Fred Basset year books - still released to this day - in an old bookshop and were hooked instantly.

There was something inherently idyllic and carefree about his life that we wanted a slice of. We didn't want to be like his owners living the rat race and desperately trying to keep up with the Joneses. Nah, we wanted to live this carefree utopian Basset existence and just chew on a good bone. 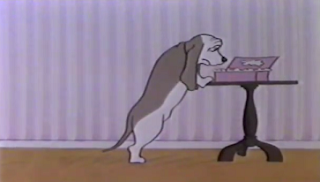 Anyway, a couple of years after first discovering Fred we got hold of the Fred Basset VHS.
And we loved it. We nearly wore the bloody tape out. 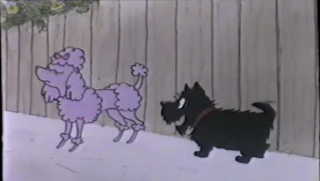 This made it a perfect candidate to come under the close scrutiny of our judgmental eye, so we headed to YouTube to reacquaint ourselves with an old friend.

Sure, the animation is a bit basic, but even the newspaper drawings were never genre shattering pieces. The driving force has always been the power of Fred's thoughts. 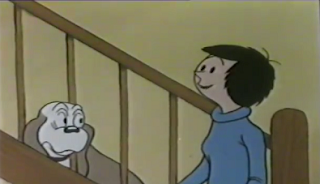 And, you know what? It's charming stuff. Yeah, it's pretty damn gentle and the most excitement we ever encounter is a butcher chasing a dog with a mouthful of sausages, but that's the epitome of a naughty, cartoon dog, so what else do you want? Fred Basset running up gambling debts with a pack of rottweilers?!

In fact, the whole series is all very middle class and packed full of all the aspirational trappings of the bourgeoisie dream. Cars, fur coats and, most importantly, a good golf handicap are all chased as an absolute necessity. Fred realises which side his bread is buttered on and gleefully goes along with all, but we'd like to have seen him lampooning his owners a little more to give the show a bit more edge. 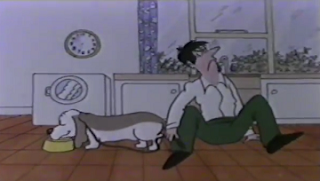 Episodes are pretty short, so there's little room for any depth in character. We're not expecting harrowing storylines where Fred struggles to overcome deep seated puppy separation issues, but the humanity on show is galaxies away from the depth seen in 'Calvin and Hobbes' or 'Peanuts'.

However, Alex Graham never set out for Fred Basset to dissect mankind's foibles, so the fact that these are bright and simplistic jaunts played out with no consequence is fair enough. It's no surprise we loved them as a child, long before we experienced the pains of loss and punching into work every day.

So, yeah, the episodes provide a well needed escape from the rigours of life. And this, we suspect, is what Alex Graham set out to achieve, so Bill Melendez Productions must be applauded for replicating this on screen. However, we were a little disappointed that they seem to have ignored Fred's erstwhile friend, Yorkie, who only makes a nameless appearance. 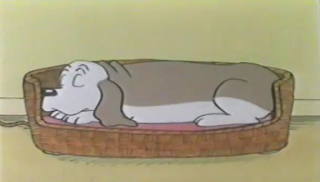 Lionel Jeffries, of course, provides a great voice and the suburban well spoken drawl is EXACTLY how we imagined Fred would sound.

Perhaps the true jewel in the crown, though, is the wonderfully dreamy, almost Bacharach-esque score composed by Ian Samwell and Max Middleton. It chimes beautifully and threatens to leave you floating deliriously into some distant, happy daze amongst the clouds.

It's a Dog's Life

We're glad we caught up with Fred Basset. He's barely aged thanks to a long held tradition of keeping out any references to technology, so it still feels fresh in its examination of human (and dog) life.

It is incredibly middle aged and placid, but it acts as a great escape from the hectic stresses of real life. We'd like to have seen a bit more satire from Fred about his middle class owners, but that's never been the Fred Basset style. He may hint at it in the source material, but he knows his owners keep him warm and this is enough to tame his cruel tongue.

We'd love to see the other 10 episodes not included on the VHS, but maybe Fred Basset isn't quite big enough to warrant such a release. Hopefully, one day, some home taped versions of the Channel 4 broadcasts will seep onto YouTube.
Posted by Telly Viewer at 5/19/2015
Email ThisBlogThis!Share to TwitterShare to FacebookShare to Pinterest