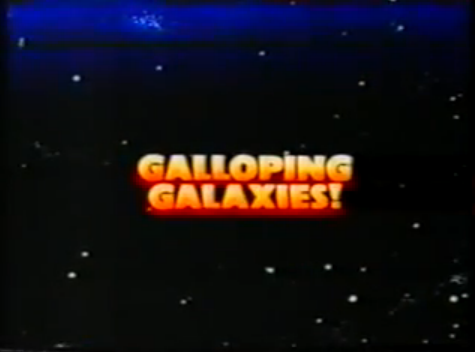 "Great galloping galaxies!" is a piece of dialogue in the mathematical sociology novel 'Foundation' by Isaac Asimov. It's a gripping story about... uh... long division ASBOs? Maybe? Frankly, we're not too bothered as we aren't a damn retro book blog, we're a God damn retro telly blog! Much more gripping to us, and you, is the sci-fi comedy romp entitled Galloping Galaxies.

It's the year 2487 and the crew of the merchant spaceship Voyager are hurtling through space led by Captain Pettifer (Robert Swales). Making up his crew are First Office Morton (Paul Wilce) and Second Officer Elliott (James Mansfield). They're also aided and abetted by the ship's bog eyed computer SID aka Super Intelligent Deducer (Kenneth Williams).

Life in outer space is never easy and the crew experience troubles such as mistakenly beaming aboard Miss Appleby (Priscilla Morgan) from the 20th century. Trying to put a spanner in the crew's works are the robot pirates Paddy O'Twenty/Robot 20 (Matthew Sim) and Sean O'Seven/Robot 7 (Michael Deeks) who are put to task by their pirate chief Mick Murphy (Sean Caffrey/Niall Buggy).

Galloping Galaxies first warped into view with 5 episodes in 1985 and a second series followed in 1986 with another 5 tales of space adventures. These futuristic visions of space dystopia were dreamt up by Bob Block who was otherwise known as "that geezer behind Pardon My Genie and Rentaghost". Jeremy Swan - who had previously directed Rentaghost - was entrusted with recreating Block's vision for the BBC. A novelisation of the first series was released by Target in 1987 and the second series was due to follow in book form, but this never materialised. No commercial release of Galloping Galaxies has ever appeared. The first series was repeated between August - September 1987 and a repeat of the second series aired in the same slot a year later.

Galloping Galaxies was a year or so too early for us.  We were watching television in 1985, but were probably in bed when the show aired. Or refusing to eat greens. Until we have time travel technology we can't pinpoint our exact TV habits. Anyway, we first heard about the series during a Twitter love-in about forgotten shows. It appealed to us primarily as it's sci-fi and that it was one of Kenneth Williams' final roles.Anyway, episode two of series one is up on YouTube (just about watchable), but we didn't want to charge in halfcocked. To help get a handle on the show, we took a trip down to the BFI Archive to watch episode one first.

You know what? We really loved Galloping Galaxies. It's like some freewheeling cocktail expert has grabbed his cobbler shaker, chucked in a couple of shots of Douglas Adams, squeezed in a dash of Carry On and garnished with some terrible special effects. It's the vodka martini to our James Bond of retro telly investigation.

The gags are sharply written and neither condescending or childish - this is good as it means we don't feel ridiculous watching a kids show. Kenneth Williams' vocal strengths are used to their full potential and there's even room for some double entendres e.g. Morton starts rooting around in SID's circuitry prompting SID to cry "Oooh! Here, take your hands off my floppy discs!". A very British vein of humour runs throughout from Miss Appleby's middle class preoccupations to the foolish Irish robots. Bob Block - who is sadly no longer with us - gets a 21 cannon salute from us for his hilarious scripts.

Performances didn't disappoint and we were rather bemused that barely any of the cast went on to carve out a career. The performances of Robot 7 and Robot 20 are zingy affairs and they're surely the prototypes for Jedward - sadly, lessons were not learnt and their spiritual heirs continue to pop up on our screeens. Robert Swales puts in a commanding role as the suave Pettifer and the rest of his crew work well around him. It's a great cast which really lift it above other wooden fare from the same era.

The internal sets for are actually pretty good. They're simple, but colourful and haven't dated terribly. The special effects, on the other hand, appear to be stuck in the 1970s - namely Revenge of the Cybermen. What else, though, can you expect from a cash strapped children's department in the 80s? It's not going to be Blade Runner, but surely there must have been enough bits and pieces left over from Doctor Who to make the space scenes a bit more visually appealing.

We've only seen 2 episodes, so there's another 8 for us to watch and we already feel like we're going cold turkey. The only guaranteed fix for our addiction is a marathon viewing session at the BFI Archive. It's a rather expensive proposal though, so we fear we may end up resorting to petty crime to fund our habit. Of course, if anyone out there has access to any other episodes, then get in touch as we do have some moneys! In the mean time, we'll just have to dine on memories of a wonderfully pitched show packed full of laughs and decent performances.

You may be asking yourself what the original working title of Galloping Galaxies was, so why not read our interview with director, Jeremy Swan, to find out a bit more about the show!


CBT: Hello, Jeremy! Many thanks for sitting down for a quick chat with us! What exactly are you up to these days?

Jeremy: These days I work mainly as a painter (pictures, not walls), I write plays, one has been  performed – and within living memory I’ve directed a couple of episodes of SOOTY for ITV.

You’ve worked on iconic shows such as Sooty, Rentaghost and Jackanory, but how did you get started in in the world of children’s television?

I started in Children’s Television as the AFM (Assistant Floor Manager) on JACKANORY in 1967 and eventually became a director of the programme.

We mentioned Rentaghost just now, which was also a Bob Block show, so is this what led to you getting involved in Galloping Galaxies?

Bob also wrote GRANDAD, starring Clive Dunn, which I produced and directed; and the BBC greatly appreciated his unique talent – so any new writings from him were encouraged. As with RENTAGHOST and GRANDAD, his latest scripts came into my section of the department’s output – I had inherited this position from Paul Ciani – a producer who had gone on a BBC attachment to Singapore.

What can you remember about the initial stages in getting Galloping Galaxies off the ground?

Originally it was called WORLD’S APART. I thought that title was too documentary and a bit suggestive of some sinister late-night probe on BBC2 ……. So I came up with GALLOPING GALAXIES! The initial scripts lacked a central core and, after a visit to 2001, came up with a computer character. Thank you, Stanley Kubrick! I’d done a lot of JACKANORYS with Kenneth Williams so SID was a great excuse to work together again.  And Miss Appleby was played by Priscilla Morgan – Mrs Clive Dunn

We were really impressed with the quality of the scripts and performances, but did everything run just as smoothly behind the camera?

The BBC were notoriously disapproving of children’s sci-fi in the mid-80s with Doctor Who going on hiatus and The Tripods third series being cancelled. Did Galloping Galaxies ever encounter any issues with the powers that be?

Kenneth Williams has been described as an incredibly talented individual, but also a very complex and troubled soul. How did you find working with him?

Terrific – and huge fun. The laughs!!

Were two series always the plan or was there a desire to go on and do more?

No. Two series were fine.

One question we kept coming across when researching the show was “Will it ever get a DVD release?!” Have you ever heard any murmurings on the subject?

Finally, when Jedward burst onto the scene a few years back, did you think that Robot 7 and Robot 20 had been resurrected?

Thanks for your time, Jeremy! 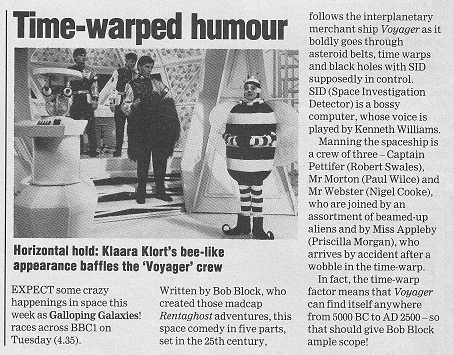