Scragtag and his Tea Time Telly 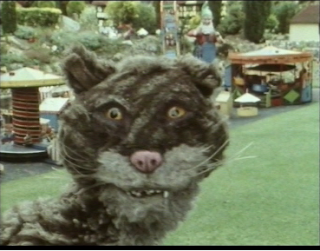 Some cats you want to sit on your lap and purr approvingly as you slurp a cup of tea and watch telly. Other cats you physically cross the road from just in case you catch something - you know the types, the scraggly looking ones who are most at home when they're rummaging through a bin. You wouldn't think they'd make a great children's TV host, but it turns out Scragtag wasn't too revolting.

Scragtag's first vehicle was Tea Time Television and this series saw the raggedy kitty living in a chest of drawers behind a secondhand shop. In amongst all the junk of the yard, Scragtag discovers an old TV which transmits 'T.T.V' - a curious collection of quizzes, stories and cartoons. And old Scragtag wasn't on his lonesome as he was accompanied by his loyal friend Tim. A gnome. Made of stone. And mute. Nothing mental there then!

Tea Time Television only lasted one series, but a year later the format was rejigged ever so slightly under the banner Scragtag and his Tea Time Telly. And lawks a lawdy, a bit of a spanner had been thrown into Scragtag's plans! You see, his beloved chest of drawers had gone missing, so it was time for an epic quest up and down the country to get his grubby paws back on his furniture.

Scragtag was operated and created by Marcus Kimber who started off working with the subversive puppets on The Young Ones - once his showbiz career was over he later became a secondary school teacher. At least that's what one errant ex pupil told us. Roy Milani produced the series' and Ian Stubbs was on hand as director to guide Scragtag on his motivation.

A series of books followed the TV series', but are more narrative affairs which present a much more humble and innocent Scragtag. Interestingly, the books reveal that there was a Scragtag fanclub you could join. We recently saw a Scragtag badge up for sale on Ebay - we cruelly missed it - and suspect this was part of the fan club package.

Despite being just about old enough to catch Scragtag, the series' completely passed us by at the time. It was only whilst rifling through some dusty Radio Times that we discovered the show.
Scragtag looked a verminous chap and therefore he was right up our alley, so we headed to the BFI Archive to investigate this grimy feline.

Scragtag, himself, is amazing. A great creation packed full of jokes, arrogance and confidence, Scragtag drove the show forwards effortlessly and had one of them great cockney accents that you just don't get in children's TV anymore - God knows why Children's TV execs fear the glottal stop, but they do. Anyway, Scragtag, yeah, as we said he's amazing. In fact, he's second only to Roland Rat in the pantheon of 80s puppet frontmen.

One of the episodes we saw featured The Chuckle Hounds aka The Chuckle Brothers performing at a local theatre to a crowd of incredibly 80s schoolkids wearing parkas and clutching at mini thermos flasks. It's adds a nice variety feel to the show and gives Scragtag a chance to engage with the kids. And, again, it's here that his personality shines through, particularly on the old gag telling front - Scragtag LOVES a gag!

The cartoons and stories are pretty entertaining as well. Peregrine Piecrust is a series of animations linked with a surreal narration about a young Yorkshire lad called Peregrine. A rather bonkers, and Italian, cartoon entitled Mr Hiccup also concentrates on a behatted gent who can't stop hiccuping and causing chaos. It's manic, it's crazy and it's exactly what kids need to get their imaginations working on full throttle.


Thursday is a big day for a rather scruffy cat called Scragtag – he’s a guest on ‘Breakfast Time’ and in the afternoon, he’s starring in his own show (BBC1). Scragtag lives in an untidy back yard behing a second-hand furniture shop. Among the junk is an old television. When he switches it on the set gives him his very own channel – TTV, which stands for Tea Time Television. Scragtag makes a lot of comments – not always complimentary ones – about the shows on TTV as he invites young viewers on BBC1 to watch with him. On TTV there are cartoons like Mr Hiccup, quizzes, and the adventures of a boy called Peregrine Piecrust. Scragtag’s off-screen assistant, former Punch and Judy man Marcus Kimber – he also created the puppets in ‘The Young Ones’ – says this streetwise moggie will have quite a lot to say about TTV during the next 22 weeks.

Last year it was called ‘T.T.V.’ – Tea Time Television, the favourite ‘channel’ of a scruffy cat named Scragtag. Now the series has a new name – ‘Scragtag and his Tea-Time Telly’ – and instead of coming from the backyard of a second-hand furniture shop it’s now set in a boatyard. The ‘bloke with a bike’ will still get viewers’ letters to him, but Scragtag will also be going out and about himself. You’ll see him in a playbus and a classroom, where he’ll meet his young fans – and Tim the gnome. ‘Tea-Time Telly’ will have some new cartoons , too, and this week Scragtag will even be phoning Phillip Schofield.
Posted by Telly Viewer at 6/06/2013
Email ThisBlogThis!Share to TwitterShare to FacebookShare to Pinterest