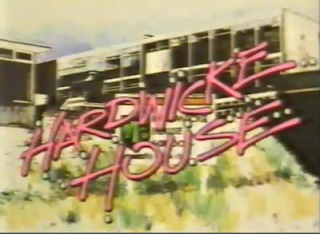 Growing up in the 1980s, my only reference point for life at secondary school was through the exploits of those oikish urchins at Grange Hill. And, truth be told, the sheer thought of stepping foot into that adolescent realm absolutely terrified me.

Okay, there was the rare promise of hunting down ghosts with the caretaker, but breathing heavily down the back of my neck was the threat of heroin, brain haemorrhages and the toupeed terror of teaching’s fiercer side in the form of Mr Bronson.

Even though these early experiences were viewed through the exaggerated lens of television, I was still quaking in my boots on that first day of term at secondary school. With hindsight, it’s possible that I could have felt much more anxious and panic stricken.

Grange Hill, after all, may have been hard hitting for its audience, but children’s TV demands a little restraint when it comes to portraying the real world. And, if my prior knowledge of secondary school had also been shaped by the sadistic cruelty of Hardwicke House, then it’s likely I would have been on the edge of a nervous breakdown as I approached the school gates.

The focus of Hardwicke House centres on the academic shenanigans bubbling away amongst the blackboards, textbooks and school bells of infernal secondary school Hardwicke House. In charge of these troubled halls of education is headmaster RG Wickham (Roy Kinnear) who, unfortunately, can’t call on his colleagues to help temper the unfolding anarchy.

His fellow teachers’ inability to stop the rot at Hardwicke House is driven by a mixture of narcissism, sadism and egotism. So, yeah, all the crucial ism’s, but who ever said teachers were perfect? Certainly not the staff at Hardwicke House who seem to have much more pressing matters on their minds.

Deputy headmaster Paul Mackintosh (Roger Sloman) is determined to undermine Wickham at every given opportunity, Herbert Fowl (Granville Saxton) is a man obsessed with control over his pupils whom he views as a disposable currency and Dick Flashman (Gavin Richards) has a slick, crafty nature that he employs to exploit women and cream off a few quid to spend at the Dog and Duck.

Not all of the teachers at Hardwicke House, though, are complete and utter miscreants. Peter Philpott (Nick Wilton) is a geography teacher for whom the crushing realities of teaching are yet to erode his optimistic outlook. And Cynthia Crabbe (Pam Ferris) is a French teacher who positions herself as an impassioned liberal with a whole host of ready-made protest placards.

Although Hardwick House primarily looks at the teachers at its disposal, it would be a little foolhardy to ignore the pupils cluttering up the hallways, so the spotlight occasionally shines upon their scurrying antics.

Slasher Bates (Kevin Allen) is the aggressively violent school bully who paralyses his fellow pupils with fear, Spotty (Paul Spurrier) has a poor complexion and even worse social skills and then there’s Donna (Cindy Day), the head girl whose sultry beauty gets the male pupils (and teachers) in somewhat of a giddy tiswas.

And when these teachers and pupils are flung together in the pressure cooker of school life, anarchy reigns supreme at Hardwicke House.

Hardwicke House was written by Richard Hall and Simon Wright and was their first sitcom to be commissioned. And teaming up with these writing newcomers to direct their scripts was John Stroud who had previously directed Who Dares Wins, Spitting Image and Educating Marmalade.

Together, this crew produced a series of seven episodes for Central Television which would begin airing on ITV in February 1987. The premiere episode was an elongated 60 minute episode which aired at 8.30pm on 25 February 1987. Later episodes came in at the more traditional sitcom length of 30 minutes.

What’s interesting about these later episodes is that barely any of them were ever transmitted. And when I say barely, I do, of course, mean that five out of the seven remain completely unaired. Only a short outtake from episode five featuring Adrian Edmonson and Rik Mayall has ever seen the light of day.

But why is this?

One thing I must address is that, despite the rumours, the tapes of Hardwicke House were never erased to preserve Britain’s moral fortitude. Where the exact master tapes are is not entirely clear, but ITN Source apparently have access to all seven episodes, so a full release remains a viable proposition in the future.

Much like the furore surrounding Heil Honey I’m Home, the storm of controversy hanging over Hardwicke House endows it with an irresistible curiosity. It’s easy for a sitcom to become forgotten to the sands of times, but when it sends viewers into a foaming frenzy it takes on a whole new narrative which is difficult to shake off.

By a stroke of luck, the two episodes which were transmitted and caused such outrage were recorded and preserved over the decades. These found their way onto the internet many years ago, so are readily available to watch. And, having taken on near mythical status as an oddity of British TV, I was salivating at the prospect of it, so duly investigated.

Hardwicke House gets off to a good start by cementing a firm concept in place. Teachers, usually positioned as the responsible adults, are shown to be just as horrendously immature and self-centred as their teenage pupils. Exposing the fragile foundations of those in power has always been an essential part of comedy, so Hardwicke House is well positioned to attack this.

And with swarms of hormone fuelled youngsters at its disposal, Hardwicke House has a rich array of resources to call upon when the frenzied anarchy, so entwined with alternative comedy, is required to create spectacles of mass rebellion.

However, the attempts to mock authority and let mob chaos run are severely restricted by the characters of Hardwicke House. Sure, in the real world, many pupils paint teachers out to be cruel tyrants, and I’m all for a bit of heightened reality in my comedy, but Hardwicke House stumbles into nothing but exponential cruelty too often.

Sitcoms often demand their characters to be monsters, but it’s usually countered by a level of sympathy from the viewer as per David Brent in The Office. In Hardwicke House, though, sympathy is a feeling which barely registers on the viewer’s emotional radar.

In particular, Mr Fowl is a noxious concoction who, with an almost psychopathic lack of empathy, is hell bent on degrading and debasing students and staff. The second episode sees Mr Fowl electrocuting a pupil to a smouldering wreck purely to demonstrate the security of his beloved stationary cupboard. Charming, right?

Mr Fowl is not the only ghoul on the books at Hardwicke House as he’s joined by Mr Mackintosh, an untrustworthy degenerate who has a creepy obsession with the bodily development of his young charges. Admittedly, there was always a teacher with these dubious interests at school, but here it feels far too sinister.

With the consummate cockney charm of any good TV wideboy, Mr Flashman appears, at first glance, to be at odds with the nastiness of Fowl and Mackintosh. However, peel away the exterior layers and you discover there’s a nasty undercurrent of vanity and ego; one which allows him to manipulate pupils and deliver them a swift punch to the gut when necessary.

Not everyone at Hardwicke House is a complete monster. RG Wickham strives to bring some semblance of calm to the school, Ms Crabbe is permanently looking out for the oppressed and Mr Philpott has a great love for teaching.

The problem with these more likeable characters is that they fall flat on their face. They all fail to achieve their goals which, despite being a key part in the tragic power behind comedy, carry little pathos in Hardwicke House. Wickham definitely has a sense of warmth and not just from the amount of alcohol he’s forced to consume, but Crabbe and Philpott are just irritating, wet lettuces.

The teachers of Hardwicke House, then, are a disappointing bunch who fail to fully engage, but what about the pupils? Do they fare any better?

Slasher is easily head and shoulders above his peers thanks to a combination of fine acting on the part of Kevin Allen and a strong character. He’s a mini menace to society and proves this with some comic flair. Okay, he’s no different to any other school bully we’ve seen on TV, but his character fits in perfectly with the anarchic agenda.

Spotty’s barely worth a mention as he’s too much of a one dimensional stereotype, but even more baffling is Donna. Given alternative comedy’s propensity for rejecting stereotypes, Donna seems to be employed as nothing more than a dolly bird in skimpy uniforms for teachers to letch over without even a hint of irony.

And, when people vehemently claim that Hardwicke House was a shocking abomination, it’s incidents such as the disturbing, leering behaviour towards Donna coupled with Mr Mackintosh’s unhealthy intrigue towards young bodies which cause the most concern.

There’s certainly plenty of violence on offer too, but it’s a brand of comic strip violence which pales in comparison against the sleazy behaviour of the teachers. Had there been some comeuppance for the teachers then it could have justified such horrendous behaviour, but sadly the teachers simply get away with it.

Mr Fowl, eventually, does get quite literally crucified in the final episode, but, despite this episode never airing, it seems to have caused consternation with many would be viewers. You see, the pay off for this crucifixion gag is that the crucifix topples over and hits a vicar on the head. Personally, I’d dismiss this as frivolous fun, but religious iconography divides like no other iconography, so, had this episode aired, I imagine it would have caused a huge stink regardless of what time it aired.

Whether Hardwicke House is truly shocking is down to a matter of taste, but what’s truly shocking is the lack of laughs in the script. Instead, a series of broad and lumpen gags tumble awkwardly from the script and clunk heavily like a school dinner hitting the floor of the canteen.

There are some nice sections such as Slasher auditioning wannabe lackeys and then later putting them through an initiation ceremony of eating raw liver, but these are in a moribund minority. The high level of emotionless sadism – impossible to confirm as knowing irony thanks to a lack of a laughter track - that permeates Hardwicke House sadly renders the series as comically impotent.

Perhaps I’ve been a bit harsh on Hardwicke House given that I’ve only viewed two episodes, but I can only go on the available footage. And, sadly, it’s just not up to scratch. It falls far short of the anarchic, alternative comedy it was aiming for and instead resorts to bullying and arrogance for its humour.

However, there’s something tragic about Hardwick House which can’t be denied. The production team must have put in a lot of time and effort, so to see it shunted off the schedules must have been terribly dispiriting. Hardwicke House needed to go out after the watershed – a sentiment that Roy Kinnear agreed with – but ITV kept it on in a primetime slot.

It’s a complete and utter cockup by ITV as it’s clearly a post-watershed show which would have been much more at home in their fabled Sunday 10pm comedy slot. And the result is that we’re robbed of five episodes which could have seen Hardwicke House redeeming itself and finding its feet. Maybe it’s time to release them and terrify a whole new generation of children at the school gates.

School's Out! - A very detailed overview on the show and it's history - http://www.offthetelly.co.uk/?page_id=330

Glasgow Herald 26/02/1987
Posted by Telly Viewer at 3/29/2013
Email ThisBlogThis!Share to TwitterShare to FacebookShare to Pinterest