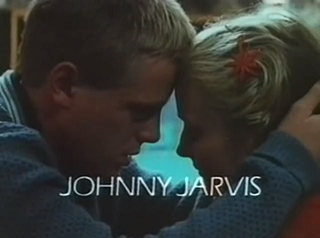 Those teenage years can be a highly alienating period and if you didn't feel a bit Holden Caulfield, then you obviously lived a blessed life. However, once you battle through the hells of acne, the opposite sex and settling on a decent haircut then adulthood is surely a piece of cake, right?

No, of course not, it's still a precarious tightrope to traverse and, as Johnny Jarvis, finds out it's a full time position to make sure you don't go over the edge.

Johnny Jarvis (Mark Farmer) is your stereotypical disaffected teen and, in an attempt to paint himself as some sort of rebel without a cause, he decides to shave his hair off and strike fear into the hearts of his peers as a moody skinhead. Portraying the typical misguided approach to image that teenagers revel in, Jarvis is also the only skinhead EVER to relax by listening to a few numbers by popular beat combo Queen. 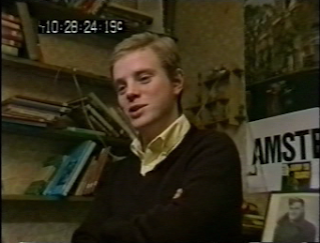 Soft rock posturings aside, Jarvis' attempts at creating a myth of strength and fear around his teenage frame doesn't sit too well with local bovver boy Manning (Jamie Foreman). Admittedly, Manning appears to take issue with everyone in society, so the fact that he wants to crack open Jarvis' head like an easter egg shouldn't be taken as too much of a slur on Jarvis' character. 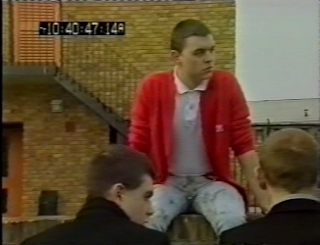 And Jarvis isn't completely on his own as he's soon got an ally in the curious shape of Alan Lipton (Ian Sears). A whining outcast, Lipton has very little going for him and he's hardly going to win Magnetic Personality of the Year, but he and Jarvis strike up a firm friendship and, together, they traverse the tricky landscape of adolescence. Starting in a typically grim comprehensive school, Johnny Jarvis follows the pair over a period of six years as the enter young manhood.

Jarvis seems to be the bookie's hot favourite to be the success story what with a promising career in engineering breathing down his neck. Lipton, despite staking grandiose claims to becoming an intellectual, looks set to be piled high on the scrapheap of unemployment due to a discernible lack of skills. Mind you, as the years pass by, the two gradually find their fortunes reversing. 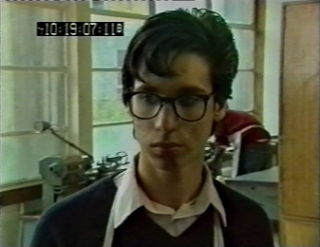 Jarvis' bright future is extinguished by the rigours of life and soon becomes a mundane existence as Jarvis struggles with unemployment and holding together a family with his beloved Stella. Lipton, however, rebels against the destitute future awaiting him and steadily carves out a nice niche as a rock star; he isn't completely averse to using Jarvis' angst as a template for his compositions.

And if things weren't angsty enough for poor old Jarvis then there's a rather bizarre plot rattling away in the background about his father, Jake (Maurice Colbourne) and his subsequent run-ins with the unpredictable drug dealer, the Colonel.

Johnny Jarvis first aired on BBC in late 1983 and was made up of six 50 minute episodes which went out in a 9.25pm slot. The series was based upon the novel of the same name written by Nigel Williams who also adapted the novel for TV. 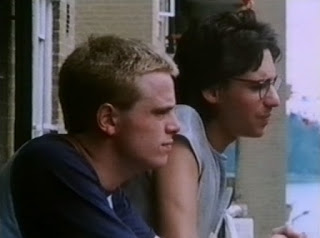 Johnny Jarvis was directed by Alan Dossor who also directed Bergerac, Where the Heart Is and Between the Lines. The series has never been repeated and no commercial releases have followed.

Yeah, right, so I'll let you into a little secret: I LOVE JOHNNY JARVIS!

The characters are remarkable constructions with Jarvis and Lipton both bringing unique dynamics to create tension and an unusual friendship. Jarvis is the dreamer, packed full of potential and a bright future whilst Lipton is his polar opposite - drippy, useless with the ladies and destined for the hell of Thatcher's Britain. 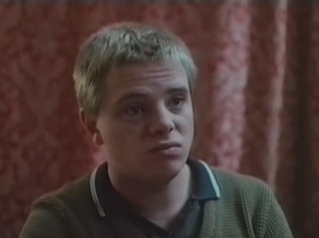 And the lingering presence of Thatcher permeates itself all throughout the series. Inner city racial tensions are highlighted by Manning's running battles with Paul Turner (Alrick Riley) whilst Jarvis' descent into unemployment amid downtrodden council estate doldrums reminds you why just so many people still hate the Tories with a passion.

Now, some people might mark Jamie Foreman down as a bit of a cockney caricature, but we can't get enough of him. He can conjure up anger and rage on the turn of a sixpence and it's exciting to see him as a thrusting and fighting young pup here. Rampaging about without a care in the world for his fellow man, it's a treat into the mindset of a psychopath let down by society. 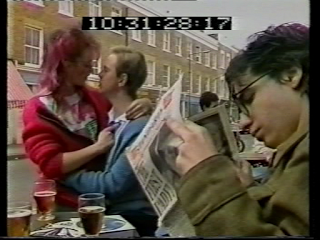 The reversing fortunes of Jarvis and Lipton also pack a powerful punch. We were more than happy to see Lipton make a few bob and get the fame which was destined to never be his, but Johnny's collapse is completely heartbreaking. And, as a result, it's highly powerful as he becomes swept up in the social and economic malaise which was engulfing the nation.

It's this descent into depression which really defines the gritty and stifling 80s grime of Johnny Jarvis. The grey, dilapidated, soot covered and streets of East London - long before regeneration projects came and eroded any sense of social honesty - reek of a grim representation of the hardships of life which is sadly missing in today's colour saturated and HD world. Sure, you might get a peek into a smackhead's den on Spooks, but it's always so beautifully lit and sanitised that the fear that you could end up there never materialises. 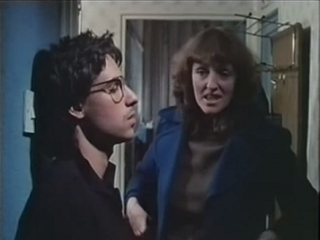 The only aspect of Johnny Jarvis that doesn't excel is the storyline involving Jarvis, Jake and The Colonel. It feels far too disconnected from the main narrative and, as a result, fails as a plot B which never manages to truly influence Jarvis and Lipton's fortunes. And, as one of the biggest fans of Maurice Colbourne in the world, it's a shame to see his talents going to waste on a middling tributary emanating from the feature presentation.

Nonetheless, Johnny Jarvis remains a fantastic production and is the epitome of a cult British TV show which deserves not only a repeat, but also a DVD release.

Street Wisdom - The period is 1977 to the present day. Against the familiar background of recession. Thursday's new drama serial charts the ups and downs of the friendship between Johnny Jarvis and Alan Lipton - from their last year at comprehensive and out into a sometimes hostile world. Benedict Nightingale meets the serial's author and watches its filming in "indisputably Nigel Williams territory": Albion Parade, N16, is in Stoke Newington, though it could be anywhere in London. Lautman's Tobacconists and Gents' Hairstyling nappears to have closed down, victim (one guesses) of economic recession, but its neighbours survive: A R Dennis ("Bookmakers Of Distinction Since 1935"), the Quick Clean Laundry, Lew's Fish Bar, Chip's Doner House, Atlantis Hair Fashions, a Chinese restaurant, and something quaintly describing itself as Istanbul FC ("members only").

A BBC voice calls "action", and two twenty-year-olds in T-shirts and jeans begin to amble down a side-road, past the dowdy terraced houses, exchanging streetwise gen about corruption. On cue, a police car roars past, its blue light whirling. We are indisputably in Nigel Williams territory, and an hour later still deeper in it. The film unit moves a mile south-east, in Hackney College, one of whose rooms has been painstakingly transformed into a realistic looking employment exchange, complete with sickly-green walls and posters about supplementary benefits. Here sits Johnny Jarvis, shambling hero of Nigel Williams' latest dramatic foray into British youth culture, waiting to sign on. Perhaps you're beginning to get a sense of déjà vu. Not another enervating saga about the miseries inflicted by society upon deprived young people! If you fear that, be reassured. Though everyone involved has been at pains to evoke the brick desert of London as accurately as possible, the serial is not primarily about the desert of its ill-effects.

It is, says Williams, more about growing up, and still more about friendship. Its subject is six years, 1977 to 1983, in the surprisingly eventful lives of Johnny Jarvis and Alan Lipton, the school runt who is propelled towards the fringes of metropolitan crime, as told by Lipton. Williams, too, comes from North London, but his background is decidedly more well-to-do. His father was headmaster of what used to be Kilburn Grammar, his mother was also a teacher, and he himself went to public school. "I was the bloke in glasses, a bit like Lipton, and my abiding memory is of wanting to be friends with people who didn't want to be friends with me". Unlike Lipton, he went on to Oxford, where he began to write for the theatre. After graduation he joined the BBC, at first working for the World Service, later directing arts programmes for television. "But I had found it, I still find it a tremendous turn-on to hear people saying lines written by me. I wanted to get back to the stage".

In 1978, aged thirty, he did so. He wrote Class Enemy, a fierce angry play about fifteen-year-old no-hopers taking over the schoolroom in which they've been left to fester, as a sort of tribute to his parents, who he felt (and feels) represented all that's right with teaching. It was accepted by the Royal Court, his home-from-home as an adolescent. London critics voted Williams the most promising playwright of the year. He now thinks Class Enemy a bit crude, a bit preachy. He still writes about the young and is increasingly appalled by the waste he sees among them: "It's criminal, what's being done. The unemployment figures are terrifying. My central tenet is not to tell people what to think," he says. "It is presumptuous, insolent. Besides, you can shout your principles from the house-tops; but if people won't listen, the only person you've helped is yourself. To influence people about society, you should present them with real characters and real situations. You have to leave them to tell you what they take out of your plays". That, he hopes, is the method of Johnny Jarvis.

Williams has always tried to get to know the young as they are, not as they are patronisingly thought to be. The serial is, he says "rather autobiographical - you know, wanting to be a good boy, and yet wanting to be happy, and wanting somehow to reconcile the two". But observation and memory aren't everything. "There's a magic thing about writing, too," he says. "It is like talking with imaginary friends. My characters are very close to me, almost like my children. And they may not say and do what I expect". To date, Williams' characters have said and done enough for four stage plays, two television plays, two novels - and Johnny Jarvis, which he originally conceived as a novel. "It's a gentler piece of work than some of mine, aiming to consider rather than to shock - and hoping to reach the same big audience that the nineteenth-century novelists did or Coronation Street does now. I want to see if I can write something that holds up as a popular novel for television".
Posted by Telly Viewer at 10/27/2012
Email ThisBlogThis!Share to TwitterShare to FacebookShare to Pinterest