Weather, bloody hell! Now there's a meteorological phenomena that didn't half have a bearing on our childhoods!

If it was raining then we were pretty limited in the scrapes we could get into because, God forbid, we might come home with muddy shoes. At the other end of the weathery spectrum, of course, was the sun and when it decided to beat its rays down upon us then the world became our oyster. And then there was snow which meant all bets were off as we absolutely lost our mind amongst the masses of crystallised water.

Yeah, so weather was important to kids and it's no surprise that the BBC tapped into this climatical awe with The Brollys.

Harry's a curious little chap because, you see, where most young boys have bedspreads emblazoned with manifestations of macho goodness - e.g. Jurassic Park, GI Joe, Brave Starr - old Harry has plumped for one that contains various weather icons. And he ain't got posters of footballers on his wall either, no, he's got a weather house. 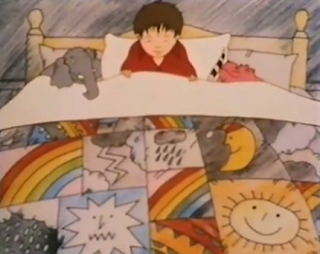 As is usual with these hygrometric pieces of folk art, housed within it are Mr and Mrs Brolly. Now, if Mr Brolly deigns to make an appearance then you oughta grab your brolly sharpish as rain's on the way. However, if Mrs Brolly pokes her noggin out then it's sunshine all the way!

But Harry, being rather meteorologically obsessed, peers so closely at that weather house that he somehow becomes magically entwined with it and finds himself transported deep into Mr and Mrs Brolly's dwelling. 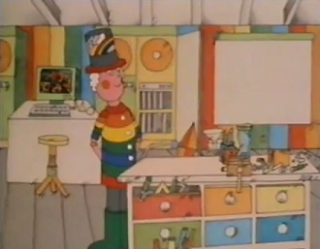 And here he finds out how the weather is crafted and controlled by the fickle hands of the grandparently Mr and Mrs Brolly. They're the yin and yang of weather and they conjure up rather opposing views of what's right for the weather even if it does lead to some bloody extremes e.g. flooding, snowdrifts and beguiling fog. 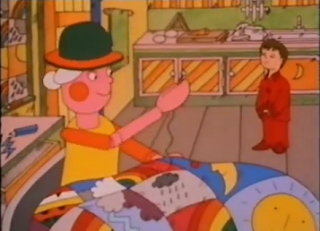 There's also an enigmatic little cloud which, for some unknown reason, has taken up residence in Mrs Brolly's bag. He don't say too much and when he does it's unintelligible jabber, but he's plucky little mixture of aerosols when he stops panicking.

Oh and how can we forget the wildly camp computer that the Brollys expect to have the answer to everything.

Harry, not surprisingly, gets confused by the conflicting changes in climate governed and championed by the Brollys. This always leads to him getting swept up in some type of quest which takes place in the Brolly's garden - or sometimes further afield - where he bravely tackles the challenges that each weather system subjects him to. 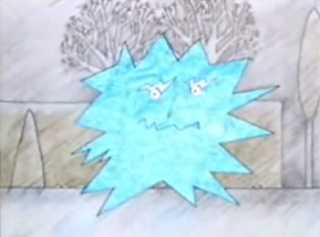 And all the time he just prays to God that the rather sinister Jack Frost ain't gonna appear and turn him into a popsicle.

The Brollys was a 13 episode series which first aired between September - December 1990 on BBC1 under the CBBC umbrella. Episodes were 15 minutes long and aired on Thursdays at 3.50pm.

The series was produced and directed by Trevor Bond (of Trevor Bond Associates) and labelled as a 'Weatherhouse Production'.

David Shaw Parker, whose vocal and acting talents have featured in The Bill and The Muppets, provided the narration and all the vocals for The Brollys. Getting all handy with their pallets were Victoria Bond, Noah Rose and Jacqui Millar whilst the animation was taken on by Thomas Barker. 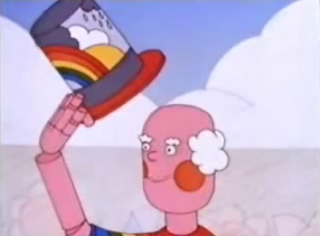 The theme tune and music throughout The Brollys was provided by John Kelham.

After the initial series aired, the series was repeated fairly regularly on BBC2 in a lunchtime slot before repeating in the afternoon CBBC slot in 1993. After this The Brollys became somewhat of a mainstay of the BBC2 lunchtime schedules all the way up to September 1998 when it received its final airing.

The Brollys even managed to find an international audience and has aired in at least the USA and Brazil.

As We Head through the Afternoon...

We were mucking about on YouTube when we saw that one of the recommended videos was some rather curious little show called The Brollys. It looked a rather charming little show, so we said sayonara to videos of funny cats and took a punt on The Brollys. 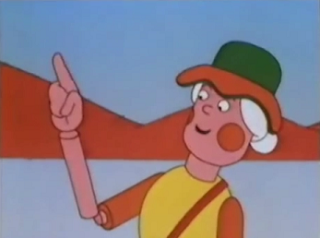 We'd never heard of The Brollys, but as it began, something, somewhere deep in our memory banks, began to faintly throb with recognition. Mr Brolly was activating neurons in our brain cavity, but we couldn't pin it to any definitive memory proof.

What stood out, head and shoulders above anything else, was the ethereal beauty of The Brollys. The illustrations are jolly little creations and the Brollys themselves are like a couple of eccentric Grandparents with a pocketful of magic up their sleeve.

And then there's that dreamlike incidental music which appears to be permanently ingrained into the background and threatens to swoop you off to dreamland at any minute. Oh and the moment where the kids chorus kicks into the theme tune is like hearing The Beatles for the first time. 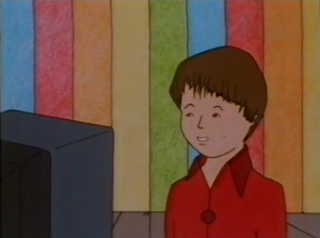 In fact, it's beauty was confirmed directly after the first episode by Andi Peters who exclaimed - and we're paraphrasing here - that "BLIMEY THAT WERE A RIGHT LOAD OF BEAUTY RIGHT THERE ON YOUR GOGGLEBOX AND THAT AIN'T NO MISTAKE!". That Peters, eh, such a lad!

What's really interesting about the show is the way in which they relate certain weather phenomena to all the terrors just awaiting to kick the human psyche out of balance. For example, snowy drifts induce feelings of isolation within Harry, bewildering mental stress and confusion rains (HA!) down on Harry during a foggy episode and sunshine fills him with joie de vivre.

Harry, himself, seems a bit of a confused character, but you have to feel sorry for the poor blighter as Mr and Mrs Brolly are constantly filling his head with contradictory views on the weather. As a result we wouldn't be surprised to discover that Harry struggled through puberty at the mere sight of rain clouds. 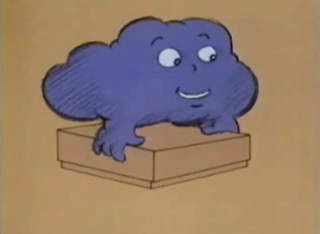 And the Brollys have this irritating habit of ignoring poor Harry when he's pleading for information or help. Mr Brolly is too concerned with playing God and trying to kick start some sort of apocalyptic Noah's ark scenario, while Mrs Brolly constantly buries her head in some patchwork quilt she can never finish in order to escape the consequences of her actions.

It seems like a bit of the waste of these fantastically created characters and probably contributes to some of the weaker storytelling aspects. We found our attention wandering at times during the episodes and, no matter how charming they were, we couldn't fully engage as a result. 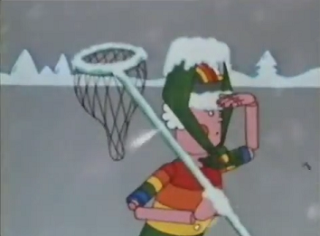 The episodes featuring the creep Jack Frost, though, are pretty special and are shot through with a layer of darkness as this malevolent sprite threatens to more or less kill everyone and everything in his path. Yeah, as it goes, he's quite the brute.

And is there any factual weather nonsense in there? Well, no, not really as it's a children's tv show and not the bloody Open University. Kids ain't too concerned about cold fronts and high pressure, they just want the basics! So we're not gonna hold this against The Brollys.

The Brollys is a beautiful affair The Brollys and we could easily be sent to sleep every night by the mercurial music on offer. However, despite a long run on TV it falls just short of being a stone cold classic.

A little more excitement to the stories could have lifted it to greater things, but as it is we'll class it as a good old fashioned, charming kids show which is well worth a watch when you're stuck inside on a rainy day.
Posted by Telly Viewer at 6/27/2015
Email ThisBlogThis!Share to TwitterShare to FacebookShare to Pinterest