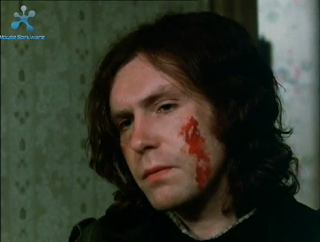 Scotland isn't just kilts, haggis, Irn Bru, the Loch Ness monster, bagpipes, square sausage, tenement buildings, heroin and ginger hair. Perhaps due to these horrendous clichés, the people of Scotland have also developed a reputation of being extremely hard. The mean, economically deprived streets of Glasgow, in particular, are testament to this and you only have to research what a 'Glasgow smile' is to see how nasty it can get. Looking at it from our vaguely lower middle class perch, we think the whole thing's a bit silly and, quite frankly, Just a Boy's Game.

Jake McQuillan (Frankie Millar) casually drifts from bar to bar confident in the fact he can handle himself. In fact, it's fair to say he relishes this knowledge and isn't willing to hear anything to the contrary. Flanked by his promiscuous, good time friend Dancer Dunnichy (Ken Hutchinson), Jake is talked into taking a day off from his work atop a crane in Glasgow docks. Meanwhile, Jake's cantankerous grandfather (Hector Nicol) - a former hardman of the streets - is a sick man and rather resentful of young Jake. Despite this, Jake seeks respect from his grandfather, but his quest to cement his reputation will end in tragedy. 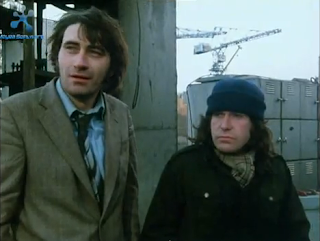 Part of the BBC's much loved and much missed Play for Today series, Just a Boy's Game was beamed into British homes on 08/11/1979. Peter McDougall - known by some as the voice of Scotland - put together the script, which was his fourth for Play for Today alongside Just Your Luck, Just Another Saturday and The Elephant's Graveyard. Capturing every minute, grim detail of a decaying and deprived 70s Glasgow was the camerawork of Elmer Cossey who had previously filmed British TV institutions such as Doctor Who and Not Only... But Also. Taking advantage of the fact that Frankie Millar just happened to be a singer, he had a dual role as lead actor and providing the soundtrack. 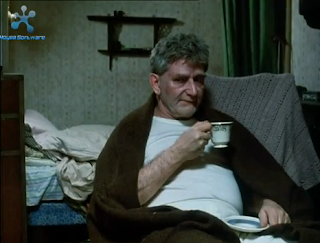 Not having watched any Play for Today for a few months we decided to revisit the vast archives. We've said before that it's a shame the TV play is virtually extinct in this day and age. Amongst the endless soapdramareality serials, the odd one off play would be a nice refresher on the palate - much like a lemon sorbet in one of those posh restaurants we can't afford. Sky Arts started their Playhouse Presents series in 2012, so hopefully there's life in the old dog yet.

We always like to identify the quality of acting early on and Just a Boy's Game doesn't disappoint. Frankie Miller effortlessly pulls off Glaswegian death stares and injects a stony soul into Jake. Throughout the play, he gradually strips Jake of all emotion until even the death of his best friend is brushed off as a necessary evil. If Frankie Miller's singing career hadn't been such a success, then acting would have offered him a promising alternative.

Ken Hutchison as Dancer is full of charisma and is the type of promiscuous, drinking womaniser that you can't help but love. His career spanned over thirty years and IMDB go as far to claim that "One of the most brilliant character actors of his generation, Hollywood's loss was British television's gain with Ken Hutchison.". The real surprise for us was Gregor Fisher as Tanza (Jake and Dancer's mate). Having only seen him in comedic roles previously, we didn't realise he could act in a serious role so well. His emotional turmoil at the death of Dancer is one of the highlights for us.

There are a few dud performances from some of the peripheral characters such as Jake's rivals, but they don't take the shine off the main characters. 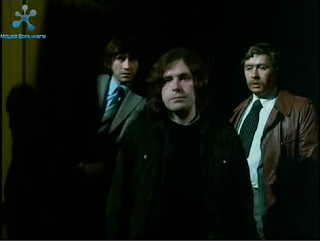 Peter McDougall started his career off working in the Glasgow shipyards featured in Just a Boy's Game, so it's a world that he knows and this shows in the writing. Known as the voice of Scotland, McDougall explores themes close to the hearts of working class Glaswegians such as family and the ability to never back down from a challenge. The pursuit of being top dog on the estate at any cost is what drives Jake and exposes psychopathic tendencies which hint at a dark future. The family angle is perhaps slightly less well explored and one area that felt a big vague. We never got a handle on exactly why Jake wants a connection with his grandfather - is it to gain his respect? Is it for the sake of family?

There's a lot of respect for Just a Boys Game online over 30 years later and it's gritty appeal is difficult to ignore. Distilling the essence of downtrodden council estates into the heart of their characters, the main actors put in terrific performances; this is matched by the subtle nods to the minutiae of socioeconomic aspects of Glasgow life such as cheap 'wine' and stark living conditions. Our main criticism comes for the lack of a real driving force. At times Just a Boy's Game comes across a bit low key. However, it's definitely one to watch on YouTube and you may even want to hunt down the DVD release from several years ago.

Posted by Telly Viewer at 7/31/2013
Email ThisBlogThis!Share to TwitterShare to FacebookShare to Pinterest